Back when I saw the trailers for Wonder Woman 1984 I was more than ready to embrace the potential sapphic vibes. Trust me, they’re there, full force, as soon as Barbara “I’m doing that awkward girl turned femme fatale trope even if I’m cute as hell already ” Minerva flat-out asks Diana to lunch.

Before I even get into Diana treated Barbara like shit territory, I gotta ask … why does Barbara want to be like her in the first place?

Is Diana further ahead of her career-wise? Because from what I can gather Barbara’s pretty dang excited about the FBI wanting her help. That’s clearly an achievement in her eyes, so that tells me that she’s happy with the direction her job is going in.

She actually shows more joy about her job than Diana does.

So at most, Barbara’s frustrated that no one acknowledges her presence when she’s in a room which, fair, but I’m not sure Diana gets much recognition either beyond coworkers knowing her name? We’re supposed to get the sense that Barbara’s inspired by Diana, but we don’t see Diana do anything in the workplace that’s noteworthy AND Barbara’s the one who’s been picked for this new assignment.

Okay. Diana can read Latin. That’s something, but I’m not sure if it’s enough to get me on board with Barbara wanting to BE Diana.

So is Barbara inspired because everyone else at work loves Diana? Well … we never really see Diana engage with anyone at the office, nor does she really care to. Later, we see Barbara actually spending time with her coworkers, which is more than Diana’s done on screen, so if that’s the kind of work relationship Barbara’s wanted all this time Diana is NOT the source for that because she actively avoids social interactions with people.

My only guess, at this rate, is that it’s because Diana’s gorgeous. Sure, Barbara, I won’t argue with you there, but, well, not to sound like one of those you’re beautiful the way you are songs but Barbara is CUTE, okay? When she starts her hot girl shit transformation she’s basically in the same outfit she wore to the office (she takes off the skirt, pulls down her shirt, and stays in her leggings) and can now walk in heels. It’s not even a NEW wardrobe, it’s what she already has.

And honestly? I was fine with that! I thought it was kinda cool that the only thing she did was take out a hair clip and pull off a skirt. What if, I wondered to myself, she didn’t change much at all? Kept the glasses, took a good look at her existing wardrobe, and embraced what she already had—LOL you know that’s not how this works.

So as the movie progresses and Barbara’s looks change (without the glasses, even if Barbara works around plenty of people who wear them, because we can’t have glasses for the femme fatale approach, it’s written in the outdated trope bylaws of “nerd to hot”) she, arguably, isn’t emulating Diana at all. There are no long, elegant dresses or pants suits, it’s knee-high boots, fur, and animal print.

So again … why does Barbara want to be like her? It’s not like she knew she had superpowers. 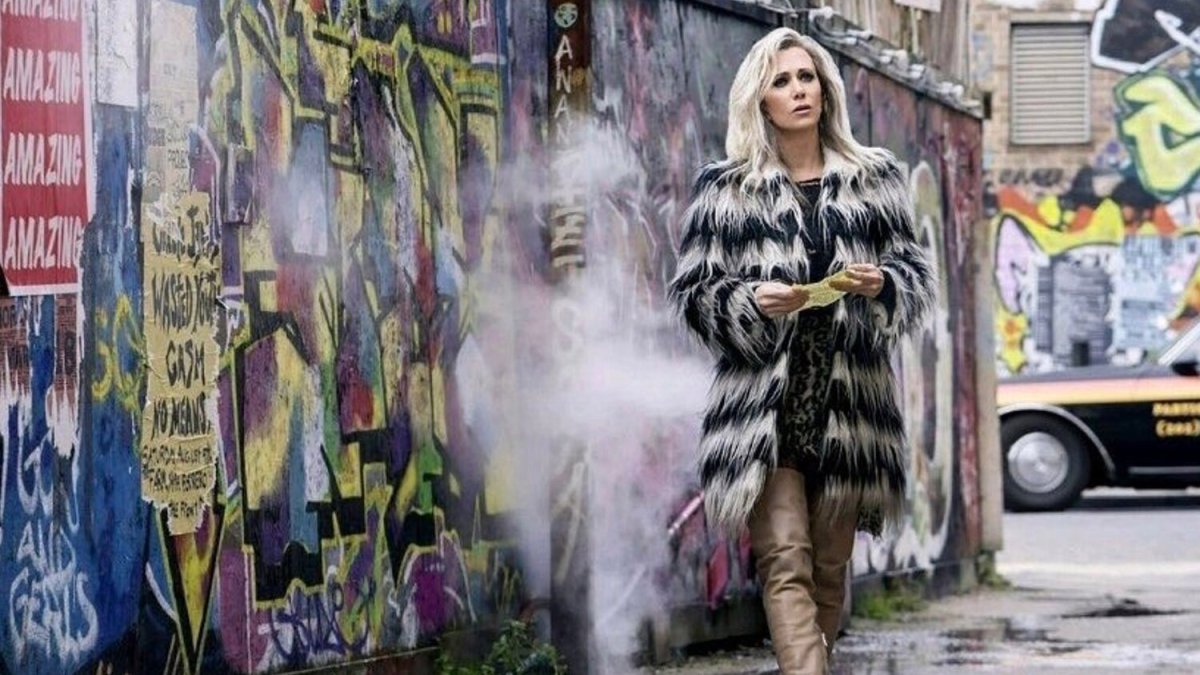 But movie’s gotta movie, so Barbara’s in awe of Diana Prince who, frankly, is not the friend/shippable woman Barbara (or anyone) needs. At least not Wonder Woman 1984 Diana Prince.

Diana helps Barbara pick up her papers because we’re working with the trope of everyone being an asshole toward the awkward nerd. Barbara asks Diana to lunch (like a straightforward queen) and Diana actually says no … until she sees how no one acknowledges this cute nerd girl’s existence and how thankful Barbara is to have someone even talk to her. Like, how is Barbara the only nerd of this caliber who works at the SMITHSONIAN? And maybe I’m being biased, but what’s so “annoying” about her compared to anyone else at the office? Can we get over this “woman is talkative about the things that excite her therefore she’s a nuisance” trope?

Anyway, Diana agrees to lunch (early dinner) after she realizes that the Smithsonian is full of a-holes who’ve written off a coworker because she stumbles in heels, drops stuff, and is eager about a new assignment? I dunno, it’s silly, and Diana thinks it’s silly too so they’re gonna eat food together.

So far I like where this is headed. This is the perfect opportunity to see what Barbara sees in Diana and Diana can actually enjoy herself with another person. In fact, I was hoping we’d circle back to that “mysterious woman saving people” news report from the beginning of the movie where Wonder Woman caught the mall robbers. I thought Barbara was gonna talk about how amazing she thought that woman was, maybe be incredibly cheesy and say she was a wonder, har har. Hell, maybe by hearing Barbara’s viewpoint Diana would get over her decades-long broken heart.

How the lunch scene works is as follows: it opens on Diana laughing over something Barbara said (we don’t get to see what it was), Diana says she doesn’t get out much, Barbara is surprised because Diana seems like she’d be popular, Diana is surprised that Barbara isn’t popular because she’s so personable, so free, they both think about their struggles, then BAM have you ever been in love which leads to more upset Diana.

Two women working at the Smithsonian who just discovered a strange rock, one of which is THRILLED to be on the case for the FBI … and we get another dead boyfriend from a lifetime ago reminder. Cute girl crush moment or not, the have you ever been in love question felt clumsily tacked onto the conversation. It felt like an attempt to bring the subject back to I miss Steve because Diana hadn’t wistfully stared at an aircraft or wristwatch since the previous scene and was getting dangerously close to caring about another person.

It’s … kinda a downer to not see the positive chemistry between them that Diana tells us about because “I haven’t laughed like that in a long time.” Instead, the focus is on what they each feel they’re missing.

After this scene, Barbara’s walking alone at night and gets harassed by a drunk guy. Diana comes to her rescue and the excuse she uses for how strong she is really makes me wish they’d played with the idea of Barbara being interested in “the mysterious crime-fighting woman” because this would be a good spot for her to put two and two together.

Before I go on, sidenote for how Barbara takes the time to feed the homeless? Seriously Barbara you are fine the way you are!

After the rescue, Diana tells Barbara to go home and just … leaves her, which I’m fairly certain has been criticized a thousand times over because this breaks all the girl codes in 2 minutes or less. After volunteering to teach Barbara self-defense (which would’ve been another great interaction between them, how amazing it would’ve been to see Diana think fondly of her Amazonian sisters and teach another woman to defend herself) Diana walks away. Who in the WORLD leaves a woman alone after she’s assaulted by a drunk guy? Outside?? In the middle of the night???

I know, I know, Barbara has to be alone to make her wish but Diana could’ve at least walked with her instead of going home and laying in bed to pine for a Chris (sorry, I mean Steve).

Barbara: I’m too restless to go home, I wanna head back to the office

Diana: I’ll walk with you to make sure you make it there ok

The next day Maxwell Lord is being Maxwell Lord at the Smithsonian, unintentionally becoming a meme (or maybe it is intentional). Barbara is charmed while Diana continues to give some major side-eye because she can definitely sense the scammer dude vibes he gives off.

I’m wondering if Diana will at least ask if Barbara slept okay after what happened, maybe even tell her she’s got a bad feeling about Max, but nothing like that happens. In fact, after this (since Steve returns) the only time the two really interact is over the genie stone, Diana going to Barbara when she needs information from her, but instead of being worried when she finds out Barbara hooked up with the man she’s been iffy about since they first met, she gets angry at Barbara for loaning him the stone.

And doesn’t even fully explain why.

And continues to only contact her when she needs more information.

And doesn’t say anything to attempt to comfort her when she starts freaking out about them wanting to stop Max because she, obviously, wished for something.

Yet somehow Diana’s surprised when Barbara has no interest in listening to her when they meet again.

Sorry not sorry, Diana, but you kinda deserve Barbara’s wrath.

And I’m not even sure Diana understands why Barbara’s so frustrated? It’s really easy to assume that Barbara’s just pissed off because she’s being told to renounce her wish, but I think it’s more than that. It’d be different if Barbara and Diana had this great friendship and Barbara was just being stubborn about not listening to Diana about this whole wish thing, but as it stands, Diana hasn’t been that great of a friend.

So when they meet again at the White House I’m not surprised that Barbara isn’t willing to listen, and it’s not just because she wants to keep her wish, it’s because … why would she listen to Diana after everything that’s happened between them up to this point?

Not to mention that, as Barbara points out, Diana’s criticizing her for not renouncing her wish and listing off what she’s sacrificing (namely, her humanity) but she’s not holding herself accountable. At all. From Barbara’s perspective, Diana has not only done all the things I mentioned in this piece, but she’s trying to make her feel bad for doing the exact same thing she’s doing: keeping her wish.

Eventually, Diana does renounce her wish, and I’d hoped that it would be from Barbara speaking that truth to her … but it’s really because Steve tells her to do it. Cue the final showdown between the two so-called friends which ends with Diana … electrocuting Barbara.

She holds her under the water to make sure she gets zapped.

And it’s not like she didn’t have any other choice, as we see a few minutes later when she uses her lasso on Max and gives him words of encouragement and compassion. Yeah, the guy she was side-eying before? He gets a tragic backstory and a happy reunion with his son. We even get to see what happened to the guy whose body Steve hijacked.

I’m so sorry they did you like this, Barbara.