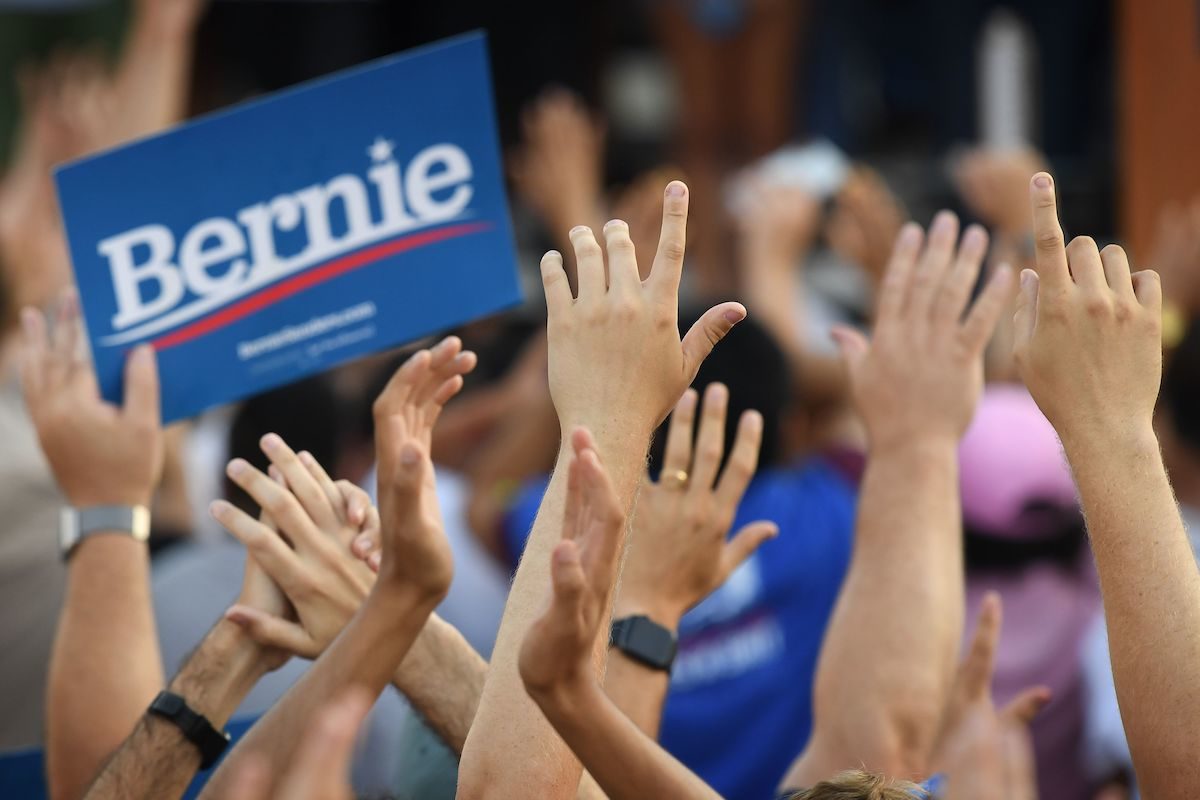 At a Kirsten Gillibrand town hall event this weekend, the audience spent the hour from doors opening to when Gillibrand took the stage listening to her campaign rally playlist. It was a great playlist–TLC, Janelle Monae, Carly Rae Jepson, Beyoncé … Right before the event started, I realized I hadn’t noticed a single male artist play, which I thought was an interesting and smart choice for a candidate so heavily focused on women’s needs, at an event centered around reproductive freedoms.

As it turns out, the playlist wasn’t 100% female artists and female-led bands, but 73%. That’s still a lot, and a lot more than any other Democratic candidate, according to a new interactive article from the New York Times. 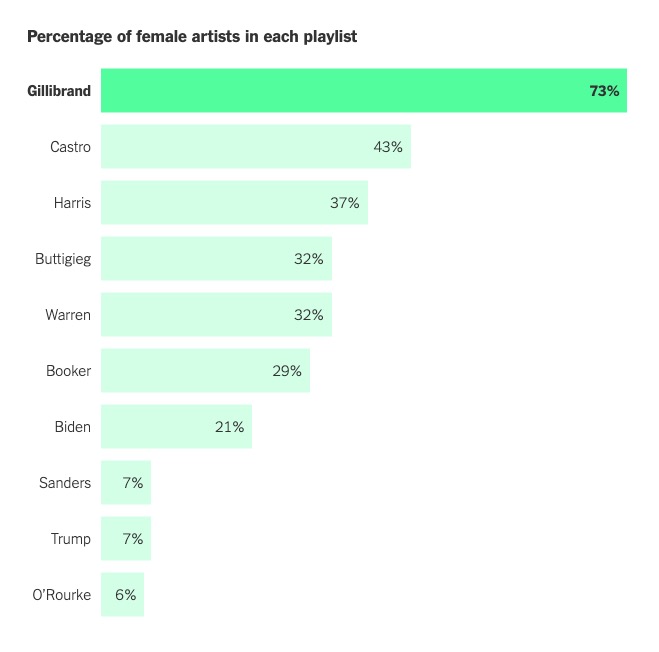 The article broke each candidate’s playlist down among a bunch of different lines, including artists’ gender, genre, and major themes. It all actually adds up to a really neat window into the kind of campaign these candidates are trying to run.

For one thing, you can tell who they’re trying to cater to. Gillibrand’s playlist is very clearly meant to appeal to younger female voters. In a lot of cases, you can also tell a lot about a candidate’s personal aesthetic. Beto O’Rourke’s punk background and Pete Buttigieg’s young age are big parts of the images those candidates work to project to voters, and both are major components of their playlists. (Beto’s playlist is full of lighter punk hits and Buttigieg gives us elder millennials the Beck and Cake we love.)

Not all candidates seem to take their playlists as seriously as others. Julián Castro’s playlist includes three Spanish-language songs (more than any other) but doesn’t say anything else about him as a person or a candidate. As the Times music critic Jon Caramanica writes, “Mr. Castro’s choices reflect the studious dullness of someone who learns about new records from supermarket speakers.” Joe Biden’s playlist is “almost perfectly divided between black and white artists” as well as between modern artists like Lady Gaga and older ones like Sam Cooke. The scope of the playlist comes off as broad and safe as his campaign.

Other candidates focus on message more than anything else, like they just did keyword searches rather than try to curate a cohesive aesthetic. For Cory Booker, it’s “love;” for Bernie Sanders, it’s revolution.

There are some really strong messages being sent by these playlists, both in terms of what they include, but also what they leave out. Donald Trump’s playlist, for example, is made up of almost entirely white artists. (As well as artists who have sent him cease and desist notices.) Whether deliberate or not (it almost definitely is), that sends a message. And so does a playlist that seems to consider women to be an afterthought, if thought of at all.

Does a playlist matter as much as policy? No, of course not. But the playlist is basically a teaser trailer for the candidate’s basic values. No one’s putting Pandora on random here; this is designed to exemplify the themes of the campaign and to set the specific desired mood for a rally, so it has to represent both the candidate and the audience. If women aren’t included in that representation, that’s a problem.

This is especially a problem if it’s happening on a campaign like Sanders’ that has long been criticized for being too white and male, that has promised to do better and be more inclusive. If they can’t even figure out the optics of something as simple as a playlist, that’s a sign that they still have some serious blind spots when it comes to fully embracing women as being essential to their campaign.

(ETA: The Sanders campaign’s one song by a female-fronted band is one of, if not the only, instance of trans representation in any of these playlists. It still only makes up 7% of the total playlist, as illustrated in the chart above, which is definitely not adequate representation.)

These candidates aren’t curating their own playlists (I assume, though I would genuinely not be surprised if Beto’s was one of his own personal Spotify mixes) but they are creating the teams that put them together. If the candidate hires a staff that shares his same blind spots and repeatedly reinforces them, how are they ever supposed to actually change anything?