"I do not think we should give an inch on this issue." 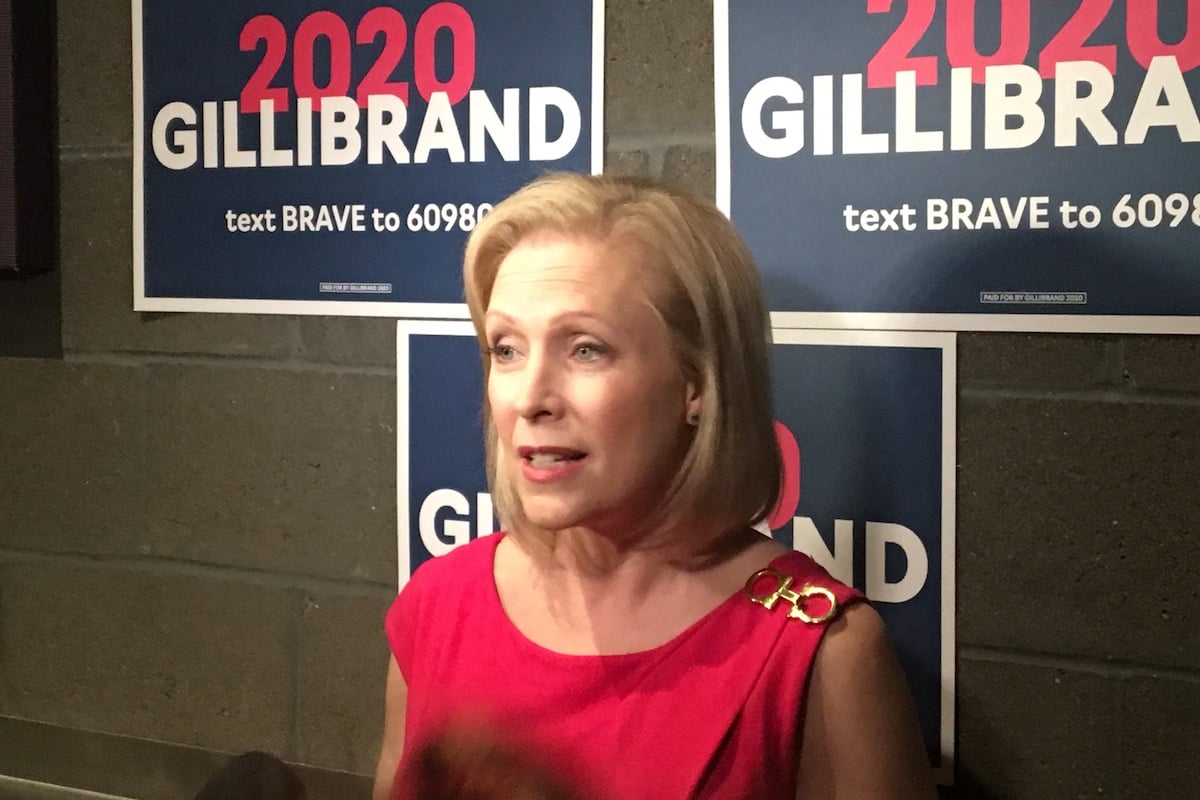 Kirsten Gillibrand was in St. Louis, Missouri Sunday to talk about reproductive justice in a town hall setting. This issue is a major cornerstone of her presidential campaign, but she hasn’t gotten much of an opportunity to speak about it. In two rounds of Democratic debates over four nights, the issue of reproductive rights was only briefly touched upon—and even that was only in the first round. In the second round of debates, not a single question about abortion was asked.

That lack of attention is not at all reflective of just how important this issue is to so many women and voters in general, especially in a state like Missouri, which has some of the strictest abortion laws in the country, and just one remaining abortion clinic in the entire state: a St. Louis Planned Parenthood.

Not only is Missouri a contentious battleground in the war on reproductive rights, but it’s also a state largely ignored by Democratic presidential candidates. I drove to St. Louis from Kansas City—clear across the whole state—to hear Gillibrand speak simply because (as far as I can tell) she’s the first candidate to even come here in this campaign cycle, let alone for a trip around this particular issue.

For some context: Driving in from western Missouri, the anti-abortion billboards start popping up about an hour outside of St. Louis. A lot of them use the illusion of medical information to push their message, like one showing a picture of a baby against a background of faint double-helixes. This one always sticks with me after I make this drive because it’s so insidious—the subtle juxtaposition of a child’s face against such a vaguely sciency backdrop to convey the image that abortion is a medical procedure that affects children rather than a collection of fetal cells. It’s so lazy and so disingenuous and it makes me so angry because I’m positive it works.

Another billboard shows a white man kissing a baby with text that reads (I might be paraphrasing), “Real men love babies,” along with the emotionally manipulative lie about heartbeats starting just a few weeks after conception. On its surface, the message seems to be encouraging potential fathers to offer support to their pregnant partners. But I think it’s more than that. The deeper, more malicious message is that cis men need to be centered in conversations about abortion, that they are deserving of that power. It is, as this event’s moderator, City Treasurer Tishaura Jones later said, “about one thing: owning us.”

That’s what this fight looks like in Missouri right now, and that’s the kind of battleground Gillibrand was walking into. Several hundred people turned out to hear her speak—enough that it was standing room only by the time she took the stage. The crowd was far more diverse than I expected, across pretty much all lines (age, gender, race, etc) and what brought them here wasn’t necessarily Gillibrand herself. In fact, of everyone I spoke to at the event, no one told me they were there because they were a die-hard Gillibrand supporter. They like her, they’re open to voting for her (pretty much everyone I spoke to said they were still undecided in their primary pick), but they were there to support reproductive rights and to hear a presidential candidate speak to those issues in detail.

That’s what Gillibrand was there to do, and she did it really well. She met with providers, patients, doctors, and nurses privately beforehand to listen to their specific concerns. Onstage, she stressed the importance of having a fiercely pro-choice President, “someone who is going to see women’s reproductive freedom as the basic civil rights and human rights that they are.” She laid out her campaign promises: to only elect pro-choice judges, to repeal the Hyde Amendment, and to guarantee that “no matter what state you live in, that you have access to full reproductive services.” She promised to codify Roe v Wade, making it federal law. She said fake pregnancy crisis centers should be investigated for fraud.

But she also offered up legitimate criticisms against some of her fellow Democrats (without naming names). “This is our fight, it’s our fight to win,” she said. “And I do not think we should give an inch on this issue. I think we should only support Democratic candidates that see women’s reproductive freedom as the fundamental human right that it is.”

She criticized Democrats who see reproductive freedom as a fringe issue, saying, “These are intersectional issues that we have to put at the forefront. And women’s reproductive freedom is that issue. Because it’s an issue that is about controlling women’s bodies, it’s about mandating our decisions, it’s about taking away basic constitutional freedoms and economic freedoms. And it disproportionately affects women of color and it disproportionately affects transgender men.”

“So the truth is,” she continued. “it’s something we must understand is an issue for all of us because it affects the whole country. So when Democrats try to say, ‘Well, we don’t want to just talk about women’s issues,’ give me a break. We’re 51% of the population.”

It is absolutely disgraceful that these issues haven’t been given their proper space on the debate stage. I also wish more Democrats would come states like Missouri, Georgia, and the other places where reproductive rights are most under attack. It’s easy to write these states off as being Republican strongholds and therefore not worth traveling to in a campaign, but there are also dedicated activists and terrified/galvanized voters who deserve to be centered in these discussions, and so hungry to hear a candidate speak directly to us about these issues.

Realistically, Gillibrand is not currently one of the top frontrunning candidates. She has yet to reach the necessary threshold of individual donors to qualify for the next debate, although she says she’s really close. But when I asked her if she thinks this will be the debate where the moderators finally ask these necessary questions about the war on reproductive freedoms, she told me, “If I’m there, they will be.”

If she’s dedicated to pushing this conversation into the mainstage debates (and she’s proven that she is), I sure hope she’s able to stay in this fight as long as possible.