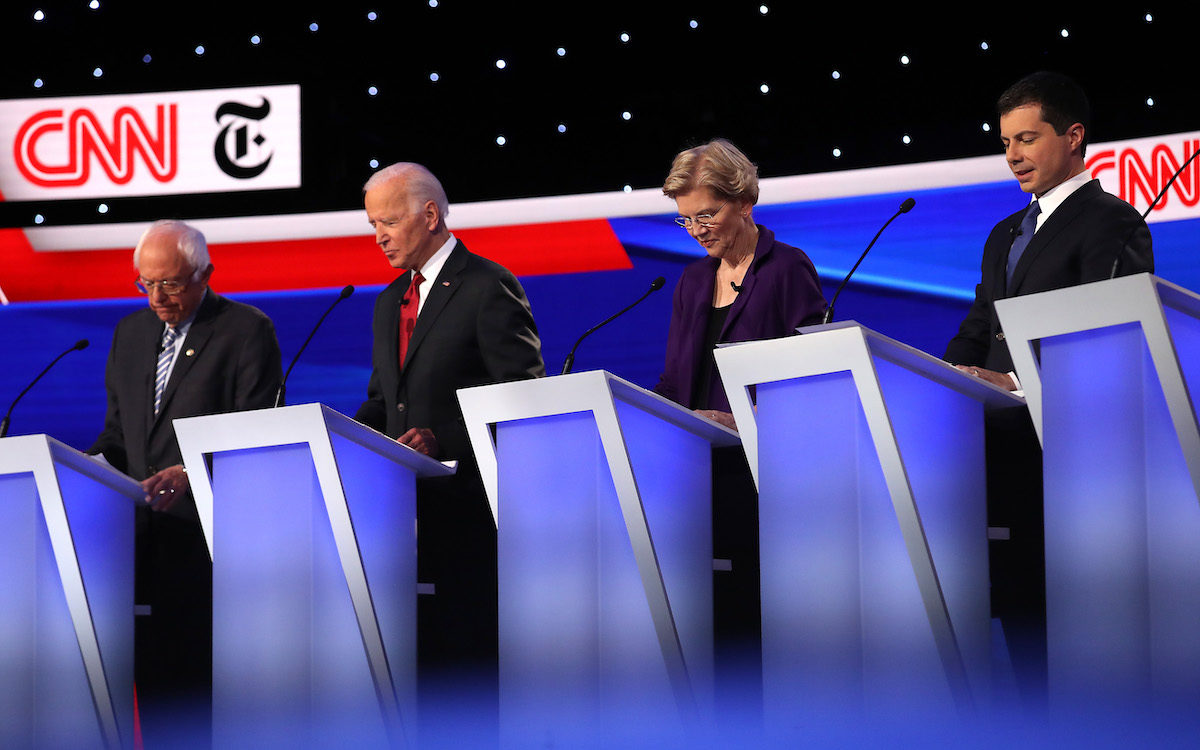 Last night’s Democratic debate was an excruciating three hours long. That’s way too long, but you could argue that that amount of time is necessary to get through so many important issues with twelve candidates. But the moderators from CNN and the New York Times didn’t use all of that time to discuss those issues. Instead, they dedicated the last 20 minutes of the debate to asking about Ellen DeGeneres.

“Last week, Ellen DeGeneres was criticized after she and former President George W. Bush were seen laughing together at a football game. Ellen defended their friendship, saying, ‘We’re all different and I think that we’ve forgotten that that’s OK, that we’re all different,’” Anderson Cooper said, about 2 hours and 40 minutes in. “So in that spirit, we’d like you to tell us about a friendship that you’ve had that would surprise us and what impacts it’s had on you and your beliefs.”

This captures the reaction pretty well:

When you’re eight hours into the debate and Anderson Cooper asks a question about Ellen pic.twitter.com/19orEhk50U

The question was frustrating in just how deeply it missed the point of the Ellen/Bush controversy in the first place. No one is mad that a liberal person is friends with a Republican. We’re mad that someone so influential, who claims to be so progressive, is friends with a war criminal who actively worked to strip LGBTQ people of their fundamental rights—and we’re even more upset that she defended this friendship as “kindness,” as if it’s unkind not to be friends with people who spent their career working to dehumanize you.

Julián Castro seemed to get this, as he made the distinction between being kind and holding people accountable, “especially public servants who have a record.”

He made his feelings on the question even clearer later, calling the question “journalistic malpractice” in an interview and posting this to Twitter:

Three hours and no questions tonight about climate, housing, or immigration.

Climate change is an existential threat. America has a housing crisis. Children are still in cages at our border.

Not one question about the climate crisis.

Not one question about LGBTQ+ rights.

Not one question about immigration.

These issues are too important to ignore. #DemDebate

As did former candidate (and current Washington Governor) Jay Inslee.

This is the existential crisis of our time. Not one single question, and that’s completely inexcusable. #DemDebate

In fact, a LOT of people had that thought. The Ellen question would have been bad enough on its own, but it came after the moderators spent the entire debate ignoring climate change, as well as a whole host of other really urgent issues.

CNN spent the last 15 minutes on a question about Ellen DeGeneres and friendships.

the world: [literally on fire]

My answer to this Ellen question is that Republicans are trying to take your health care away.

ANDERSON COOPER: Irreversible climate change is going to doom all mankind to a painful heat death if we don’t act soon. So, obviously, I’ve gotta ask: Who’s your shittiest friend and why

Don’t worry, everybody! We only have to go through this eight more times before the primaries.