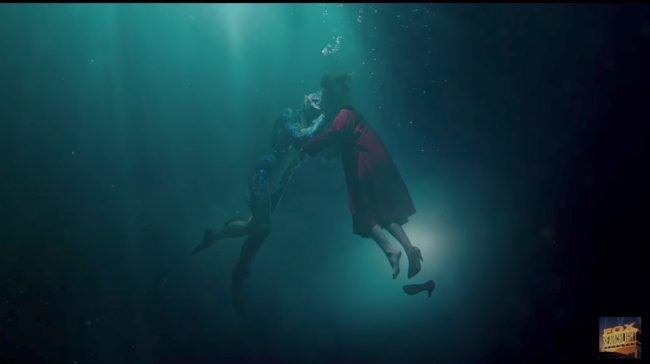 Guillermo del Toro’s filmography is nothing short of amazing with films like Pan’s Labyrinth, Cronos, Pacific Rim, and Crimson Peak. While we all have our favorite del Toro film, the director told Collider that his most recent work, The Shape of Water, is his favorite of the films he’s done followed by Devil’s Backbone and then Pan’s Labyrinth.

Shape of Water opens in December, but it’s already been making huge waves with reviews coming out of film festivals and headlines about the fish monster sex scene. Del Toro revealed recently that he would be taking a year off from directing because he wanted to travel with Shape of Water and spend time with it on the awards rounds and touring.

From what we’ve heard about the Cold War fairy tale, the director has emphasized many times that it’s an ‘antidote’ to the current moment and wants to promote hope. He says:

“I’ll tell you, it doesn’t get more personal than Shape of Water for me. I am the proudest of it. It’s my favorite movie that I’ve done. Just to be in the conversation is really, really great. You work very hard to get the movie out there and have it seen, and the movie does connect, beautifully, with an audience. It has an enormous heart. I’ve seen it 190 million times and I still cry in three or four moments in the movie. It’s even more than that. There are one or two scenes that I cannot even describe without getting moved. I cannot see the clip without getting moved. It’s a very personal movie. I love it. I call it ‘a fairytale for troubled times’ because it’s an ointment against the world, where we’re waking up every morning with worse news.”

It sounds like Shape of Water might soon be our favorite del Toro film too. The film opens in NYC theaters December 1st and will expand in following weeks.