The Shape of Water and Fish-Monster Sex | The Mary Sue 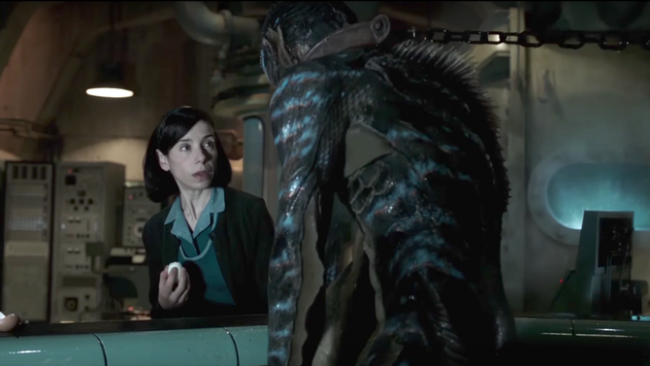 “Guillermo [del Toro] is the one director who can make a monster the leading man,” actor Doug Jones told The Hollywood Reporter in a recent interview. “In The Shape of Water he has created this fishman mutant, last of his kind, who becomes a sexy love interest. I don’t know anyone else who could’ve pulled that off but him.”

Jones, who plays the “sexy love interest” fishman mutant, known as The Asset, discussed the character’s development and very intimate, full-frontal sex scene in his interview.

“[del Toro] kept pushing the sexy,” Jones explained. “This character has to be sexy. When watching the film you have to believe that someone could actually fall in love with him and find him sexy and want to take their clothes off in his presence. So how do you create a monster who does that?”

Jones was first approached about the role back in 2014, and even then del Toro had “concern[s] about the intimacy that was going to be portrayed on film.” He wasn’t sure if Jones would be comfortable with the scene between his monster and Sally Hawkins’ character. “He was hesitating when he talked to me,” Jones said, “so I asked what were his misgivings. He said, ‘I know you’re a good Catholic boy, I just want to make sure it’s OK with you to play this.’ I asked what could possibly be the problem and he goes, ‘Well, there’s a fuck scene.’ (Laughs.) As only he could say.”

“When I asked him why this time does it need to involved full-frontal nudity — I mean, we’re going for it! — and he harkened back to the Creature from the Black Lagoon and Frankenstein and any of the classic monster movies that helped develop his love of monsters. There was always a romantic side to these characters and relationships on film that never got actualized all the way. Guillermo said this time, the monster’s going to actually fuck the girl. (Laughs.) A gentler way to say it is that this is the creature from the wet, black lagoon who actually gets the girl this time.”

Now, I find Jones’ woman-as-prize phrasing pretty problematic and reductive, but based on the early reviews, I think the film itself is more romantic. And I really like that del Toro and the cast are going for it with this scene. One of the many cool things that science fiction and fantasy can do is to craft alternate visions of intimacy and sexuality, and to make us think about sex as the weird, squicky, intimate, animal, and fascinating thing it is. I’m glad that they’re taking advantage of that – even if I still have no idea how they’re going to pull it off.

What do you all think, though?

(Via The Hollywood Reporter; image via Fox Searchlight Pictures)