Deinocheirus mirificus, the Weirdest Dinosaur Ever | The Mary Sue

Say Hello to Deinocheirus Mirificus, AKA the Weirdest Dinosaur Ever Discovered

Hold on to your butts—oh, wait. I guess you can't. 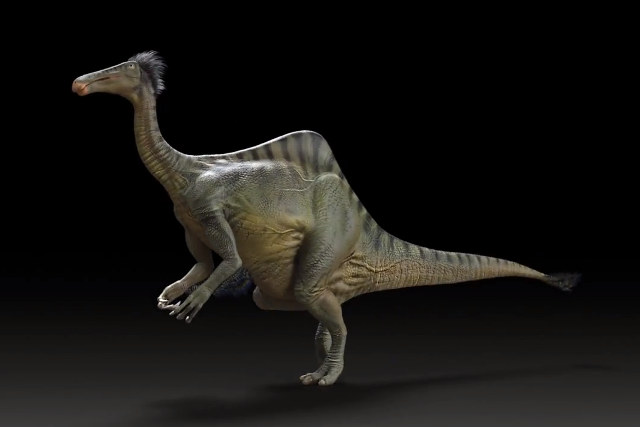 Just wait until you see it move.

First, a story: are you at all familiar with the Lion of Grispholm Castle? According to the tale, King Frederick of Sweden was given a lion as a gift in the 18th century, and wished to have it taxidermied upon its death. However, the taxidermist was only given the pelt and bones and, having no idea what a lion even looked like, constructed a nonsensical cartoonish nightmare. I’m just saying, maybe Deinocheirus mirificus was not as incredibly weird as researchers from the Institute of Geoscience and Mineral Resources in South Korea and the University of Alberta would have you believe. I sure hope he was, though. Just look at him. Look at how majestic he is.

The ridiculous 8-foot-long arms of the Deinocheirus mirificus—whose name literally translates to “unusual, horrible hand,” by the way—were first found in the 1960s, but scientists were not able to locate the rest of a body for the creature until recently, when a pair of skeletons were unearthed in Mongolia. Turns out that the arms were just the beginning: the dinosaur also had a beak, a humped back, hoofed feet, and measured about 36 feet long in length.

“It turned out to be one of the weirdest dinosaurs,” lead researcher Dr. Yuong Nam-Lee told the BBC. “It’s weird beyond our imagination.” I’ll say. It looks like one of those art projects where a little kid draws a made-up animal and then a professional artist has to recreate it as realistically as possible. It is a hunched over, parallelogram shaped, Dodo bird giraffe monster. Also, I love it.

Scientists believe that the creature was a slow moving herbivore; its three-toed claw were probably used for digging and gathering vegetation, and its giant hooves kept it from sinking into the ground around the wetlands where it lived.  But how did it move, exactly? The University of Alberta put together a 3D model based on research from the Institute of Geoscience and Mineral Resources, and it’s… uh… illuminating.

Bless you, Deinocheirus mirificus. You are the doofy dinosaur of our dreams.

(via Geekologie, image via the University of Alberta)