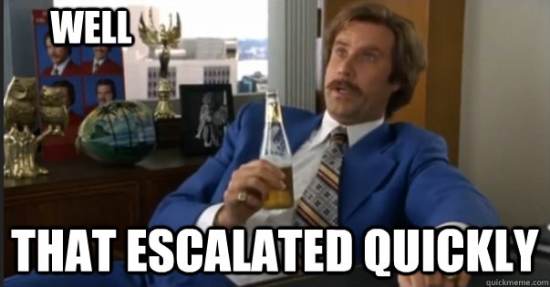 Sign language — specifically American Sign Language (ASL) — is one of those things where people that don’t have to use it tend to forget it even exists. That isn’t to say ASL doesn’t provide a meaningful benefit to society, and especially those that require it, but the general populace doesn’t exactly keep up with those things that don’t have a direct impact on their lives. Case in point, a 45-year-old deaf man in Burlington, North Carolina was stabbed several times earlier this week after a bystander mistook his communication with another deaf as a series of gang signs.

The two deaf men were conversing using ASL while walking down the street when another man happened to spot the two from his yard. Said man naturally assumed the deaf duo were throwing up a whole heap of gang signs — what else could they be doing? — and repeatedly stabbed one of the two with a kitchen knife.

Why did the assailant, Robert Jarell Neal, decide that attacking with a kitchen knife was the best course of action? It’s hard to say. Neal’s not in a gang, and the victim and he had no prior interactions. Whatever the reason, he’s been charged with assault with a deadly weapon with intent to kill inflicting serious injury as well as felony assault on a handicapped person.

If this all seems like a really bad joke, it’s worth noting that this isn’t the first time sign language has been mistaken for gang signs.