Subtitle Glasses Could Make Movie-Going More Practical for the Deaf 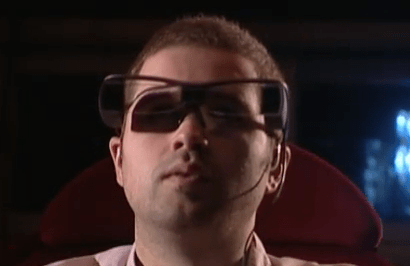 When was the last time you saw an ad for a showing of a new movie release with subtitles? Probably never, unless you’re actively looking for them. That might not be a big deal for you, but it’s something deaf people struggle with all the time. The majority of people with adequate hearing dislike subtitled movies (I count myself in the minority), so theaters have a vested interest in not “ruining” prime time showings with them. As a result, if you’re deaf, you have access to a handful of annoying alternatives like waiting for a DVD release or catching an awkwardly-timed showing.

Well, no longer, hopefully. Sony has been working on subtitle glasses that should allow deaf viewers to have their own personal subtitles without other viewers having to be distracted by them. While it seems like a pretty simple concept, the real trick is ensuring that the viewer doesn’t constantly have to switch focus from the glasses, to the screen, to the glasses, to the screen. These glasses manage to provide the subtitles in such a way that they appear to be projected on the screen, in the same field of view as the action of the movie.

The hope is that these glasses will start to be made available in theaters sometime next year. Even though the glasses have yet to make their first public appearance, other applications for the technology are already being brainstormed. One potential use would be to provide real time conversation transcription so that a deaf user might be able to use the glasses to follow along. Of course, the logical extension of that would be transcription and translation, and although it wouldn’t be perfect, it’d be a step toward the universal communicator I think we all want.

For the moment, the glasses look a little bit doofy, but considering they’d be worn in a dark theater where everyone is focused on the explosions and pretty women on the screen, that’s probably not a big deal. One can only imagine that they will become more and more sleek as time goes by and hopefully this kind of technology can be implemented in all matter of data presentation. Personally, I’d love it if my entire life was subtitled. It’s about time life got a HUD.