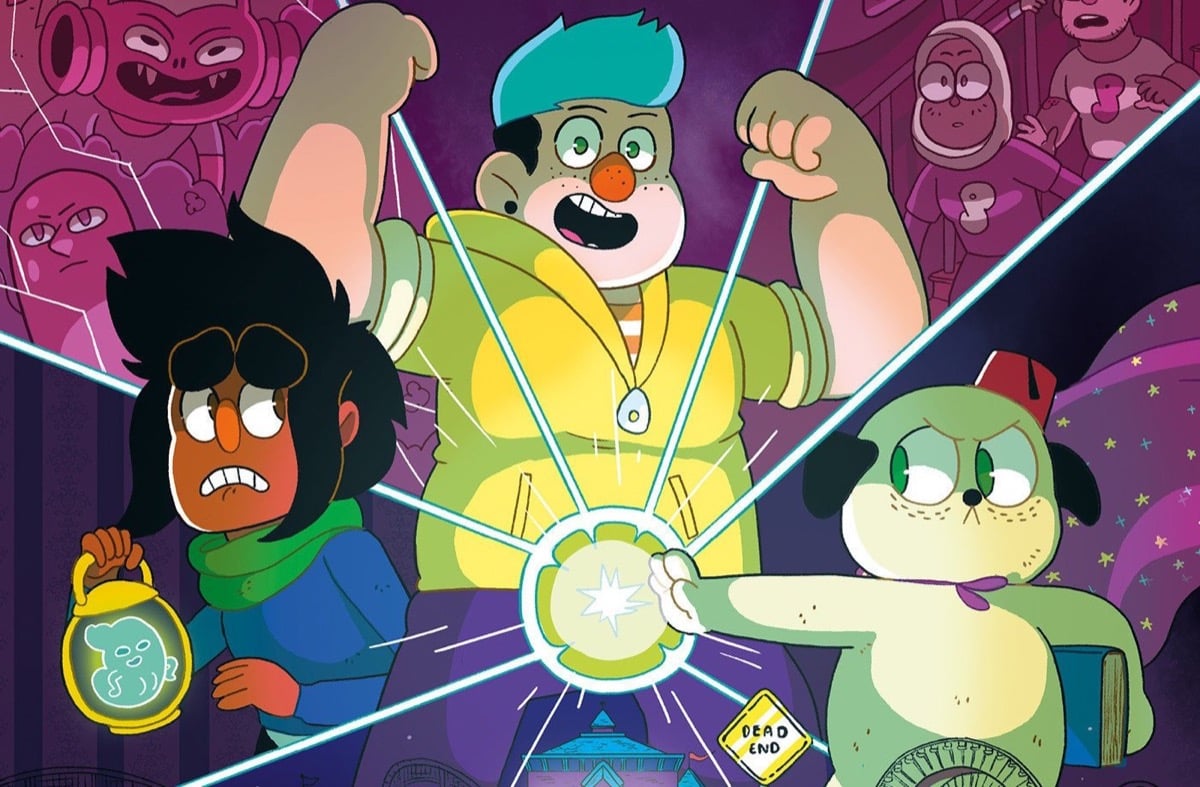 Back in 2014, Dead End, a five-minute cartoon about two friends (Barney and Norma) and a talking dog (Pugsley) who find their house is haunted, debuted on Cartoon Hangover. The cartoon proved but to a one-off, but in 2015, Dead End was reworked into DeadEndia, a comic book self-published by creator Hamish Steele. The haunted house setting was replaced with a haunted house theme park attraction (which was really haunted), at which the main characters work, with Barney (having run away from home) also living there. In 2018, it was remade into DeadEndia: The Watcher’s Test and republished by Nobrow Press.

Years later, with a followup (DeadEndia: The Broken Halo) already released, DeadEndia is set to have another crack at an animated series, courtesy of Netflix. Little has been revealed about the series beyond the 2021 release date, but what marketing material has been shown indicates that it’s based on the version of the theme park seen in The Watcher’s Test, rather than the original comic book.

In the wake of the series announcement, The Mary Sue spoke with series creator and showrunner Hamish Steele about the creation of the series and what fans could expect from it.

The Mary Sue: It has been six years since Dead End was released as a Cartoon Hangover short. How has the series changed on its journey to becoming DeadEndia? And how much has remained part of the show’s DNA?

Hamish Steele: Quite a lot has changed, but I think that’s mostly because I feel like a whole new person now. That original short was my first job in the industry, and I wasn’t sure how much I could ask for in terms of representation, etc. There’s one “joke” which alludes to Barney’s sexuality but nothing else, and as a 5-minute short, it had to just deliver the laughs without any deep plot or world building. But I truly think the core principles of the three lead characters have remained the same throughout every version.

TMS: Do you feel that it has become easier to pitch shows with LGBT+ characters since Dead End was released?

Steele: In my experience, absolutely. I am incredibly grateful to the showrunners who’ve come before me for fighting those painful battles. I have fought them too, although this is the first time successfully. That said, there’s been absolutely no pushback from Netflix about representation. I think it was actually a key reason they wanted it. 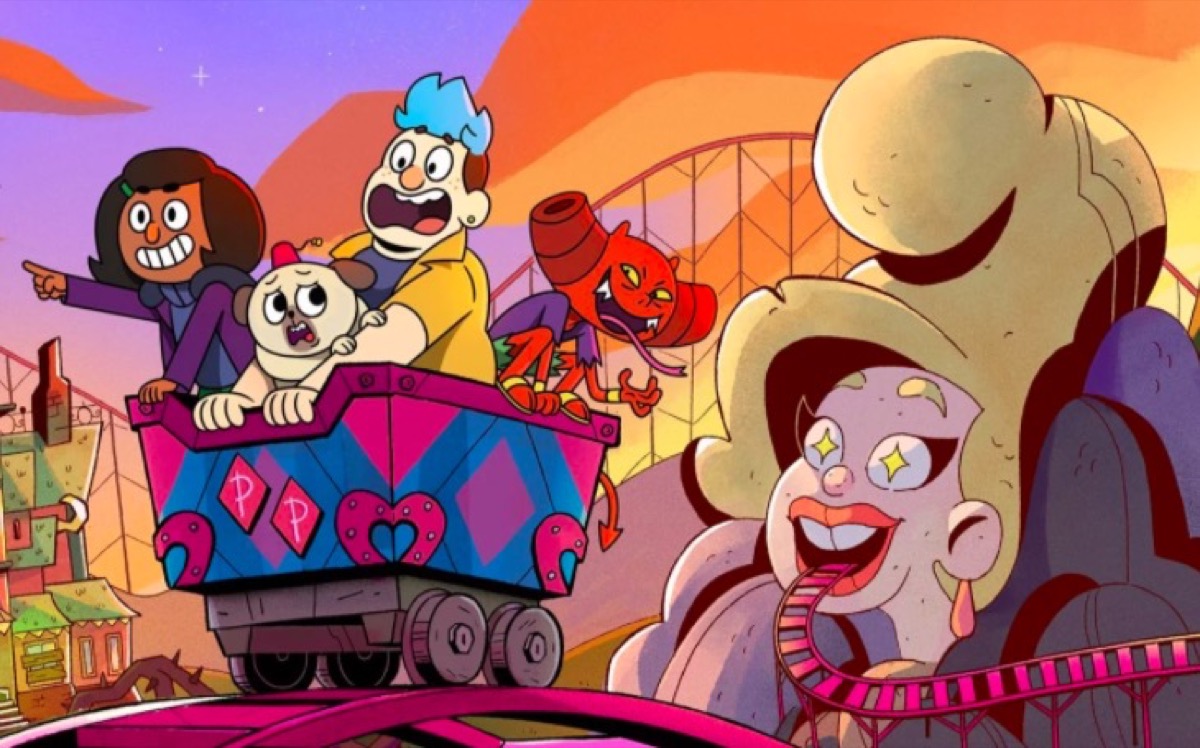 TMS: In the comic, the theme park the series is set in is themed around different characters, depending on the version. Why did you move away from Pauline in the original comic, and why did you bring her back for The Watcher’s Test/the series?

Steele: Honestly, in the original short, Pauline was pitched as “what if Dolly Parton was a serial killer,” and for some reason, I didn’t think of a way to include her in the webcomic version. Literally days after establishing in the webcomic that the park would be called Winslow’s Wonderland was I like, “OH CRAP! DOLLYWOOD IS A THING!” Pauline is just such a fun character to use, and she’s even more of a presence in the show than in the books.

TMS: You’ve received a lot of praise over the years for the way you’ve depicted Barney. When did you decide that Barney would be trans? And what went into that decision?

Steele: I wish I could remember. Barney was always queer, but in the early days, he shifted about as to which flavor. I remember needing a reason for him to be living in a theme park, and I had been reading a lot about the trans runaway rates, and I felt like I wanted there to be a heroic character who’d had to make that choice. The cast are all semi-based on the members of my own “found family,” so making him trans was never a big important decision in my head. It just felt natural.

TMS: As a cisgender creator, how have you walked the line of depicting a trans character without talking over trans people?

Steele: I think about this a lot. I think part of the way I’ve tried to walk the line is by making sure that this isn’t “a trans storyline” but Barney’s storyline. Ultimately, the story is about demons and ghosts and time travel and talking pugs, and it features a trans lead. I wouldn’t dare to write a full book about what it really feels like to be trans. Instead, I’ve just tried to tell the adventure story I want with a peppering of the real world in there.

And there’s loads of aspects of Barney I relate to and feel comfortable writing about. For books, I did employ sensitivity readers, and for the show, we’ve hired trans consultants, writers, story boarders, actors, etc. So, at every stage, I’ve tried hard to avoid making too many mistakes. But I accept Barney can’t be the perfect character for everyone, so I would just hope that this show will help out more trans creators getting their chance to tell their stories.

TMS: How similar to/different will the plot of the series be from the comics? Do you have surprises planned to keep longtime fans on their toes?

Steele: Obviously I can’t say too much but the show is a different beast. I love getting the chance to tell a slightly different story in this world, and the surprises might actually be the moments when we DO feature things from the books. The journeys might look different, but they have the same destination. If Netflix had just bought the rights off me and got another showrunner to run it, I might’ve asked them to stay closer to the books, but because I’m in charge, I feel like I have more freedom to make yet another version of the world (and yes, the theme park once again has a new name … but you’ll have to wait and see …) 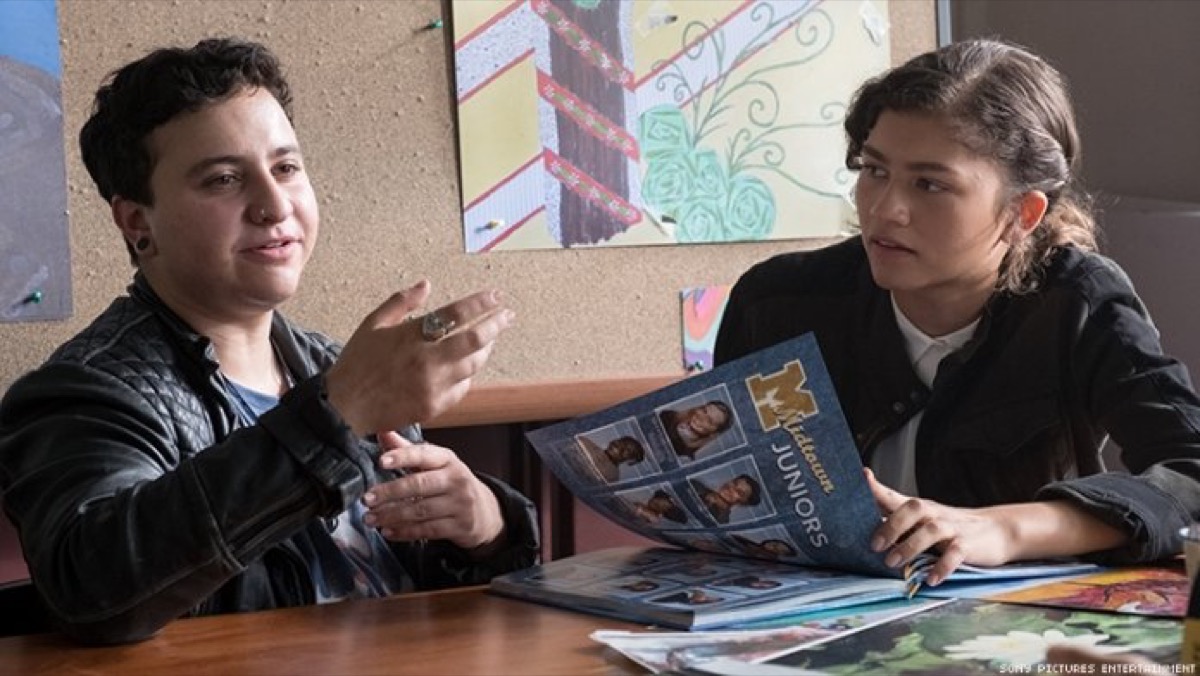 TMS: In terms of casting, was there anyone in particular you were excited you were able to get?

Steele: I was so excited by everyone—truthfully. Zach Barack was who I wanted before we even started casting. He really is like a real-life Barney! Whereas Kody Kavitha was a new face for me and absolutely killed it in the audition. Courtney was very hard to cast. We might’ve seen more people for them than anybody else, and we actually opened auditions up for people of all genders. But Emily Osment just felt so right, and I can’t wait for you to see her interpretation.

I’ve been a huge fan of Alex Brightman’s for a long time, and his Pugsley is quite different to the version I had in my head, but that’s the best kind of audition—when you find someone who makes you fundamentally reimagine a character and be excited by that. And finally, Miss Coco Peru is a true queer icon, and every single one of Pauline’s lines is hysterical. I know that sounds like I’m just not picking favorites, but it’s true. This cast is very special, and there’s even more amazing characters I can’t talk about yet.

DeadEndia is set to debut on Netflix next year!