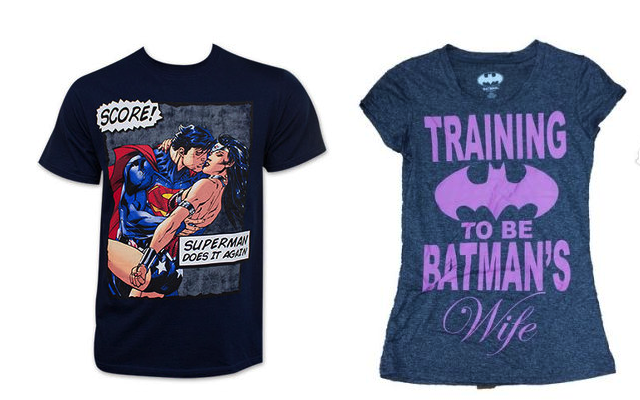 Say what you want about DC Comics and their various and sundry public marketing snafus, but they’re getting much, much better at quickly and graciously addressing fan concerns and apologizing for their involvement. Which, I guess they kind of had to when you think about it. Still, credit where it’s due, guys.

In case you disappeared from the Internet yesterday and don’t know what we’re talking about, yesterday several websites (including us, of course) pointed out that the above two t-shirts don’t exactly lend themselves to a positive and empowering atmosphere for female comic book fans. In light of the controversy, a spokesperson for DC told The Huffington Post the following:

DC Comics is home to many of the greatest male and female Super Heroes in the world. All our fans are incredibly important to us, and we understand that the messages on certain t-shirts are offensive. We agree. Our company is committed to empowering boys and girls, men and women, through our characters and stories. Accordingly, we are taking a look at our licensing and product design process to ensure that all our consumer products reflect our core values and philosophy.

Between this and the apology by Justice League: Axis of Villains board game maker Wonder Forge to writer Peter V. Brett, who recently recounted his poor experience playing the woman-less game with his young daughter, it seems like DC (and the companies they license their characters to, of course) are sloooowly starting to figure out we hate it when they do stuff like this. Which is great! That’s what we want, after all: for DC to help make comics a friendlier and more welcoming environment for everyone by championing diversity and equality, and maybe encouraging young girls to aspire to more than “Batman’s wife” or “Superman’s score.”

Oh, also, a Wonder Woman movie. But it’s all basically the same core concern when you think about it.