Dear DC Comics, This Is Why You Shouldn’t Leave Creative Little Girls Behind 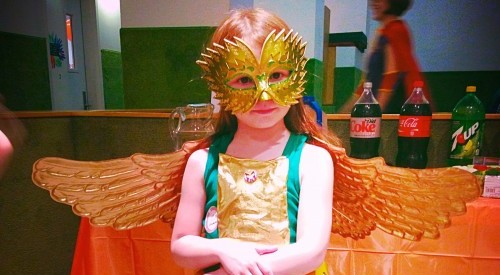 We saw the following on fantasy author Peter V. Brett’s blog and felt compelled to reach out and ask for permission to repost. The subject is something we feel strongly about: The exclusion of females from superhero merchandise. Take it away, Peter.

For my birthday a few months ago, my buddy Matt gave me Justice League: Axis of Villains, a superhero board game by DC Comics and game maker Wonder Forge. “It say ages 8 and up,” he tells me, “but I read the rules. Cassie’s smart. She can handle it if you play together.”

We’re old, so we don’t really get gifts for each other anymore, but we do buy stuff for the kids. A really thoughtful gift, it was a way to connect with my kid via something we both love, and simultaneously teach her gaming, math, and strategy. Hours of quality time with my kid. Geek dads FTW.

But then I looked at the box. There were plenty of DC heroes and villains depicted, but they were all male.

A decade ago, I might not have noticed. Or noticed, thought it was lame, shrugged, and moved on. But I look for these things now, because I have a little girl and I want her to feel included.

“Are there any girl characters?” I asked.

Matt had a flash of concern cross his face. He has two daughters himself, and understood immediately. He tilted his head to take a closer look at the box.

“They must,” he said at last. “It’s the friggin’ Justice League. They’ve got to have Wonder Woman, at least.”

It was a fair argument, but doubt niggled me. A few days later Cassie saw the game and asked to play it. I showed her the board and the dice, and explained how we pretend to be the Justice League, defending the Watchtower from bad guys.

She was way into the idea. She’s seen all the episodes of Justice League and Justice League: Unlimited. She knows the Watchtower and can name almost everyone even in the extended league. She’s especially interested in the women of the league. As those of you who read the blog regularly know, she has made costumes for many of them, including Wonder Woman, Hawkgirl, Batgirl (who isn’t in the JL, but Cassie says she should be), and even some of the villains like Catwoman and Harley Quinn.

But sure enough, we opened up the game to find four player heroes to choose from, and at least two dozen villains, and not a female in sight.

“What girl can I be?” Cassie asked, digging through the game pieces.

Cassie put down the game pieces. “I don’t want to play this, then.” She turned and moved to leave the room, and it broke my heart. In part for her, and in part because I love superheroes, and this should be something we can share.

“How about if we make our own girl pieces to play?” I asked. “It can be an art project.”

It was a nice save, but I was still pissed. I groused about it on Twitter moments later, and a reader came to my rescue, pointing to this gem at Derivative Crafts.

Someone had already encountered the same problem as me and fixed it.

Some days, I fucking love the internet.

The project fell to the wayside for a while. She had school and camp and playdates and what have you, and it was a low priority. But the last couple weeks have been the gap between camp ending and school starting back up, and I’ve been struggling to fill the days. So the other day we printed out the control pads, cut and pasted them to cardboard backs, and voila! We were ready to play, now with five different options for female players: Hawkgirl, Wonder Woman, Vixen, Zatanna, and Huntress. 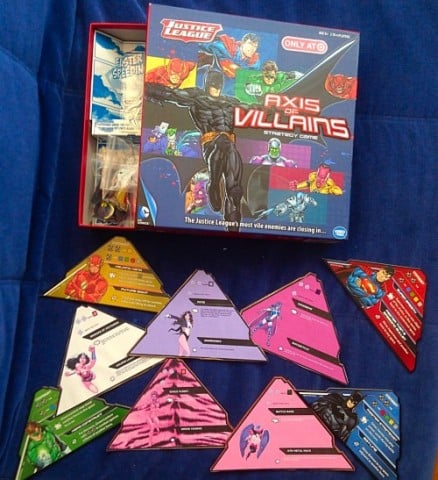 As a game, even apart from the appalling lack of female characters, Axis of Villains isn’t the best. The rules are vague in some places and unnecessarily complicated in others. The powers and options are lame, and the mechanics are tedious. This too is something others online have noted, and I’ve gotten good tips on how to tweak rules to improve gameplay.

But for all that, Cassie loves it and wants play every chance she gets. And this is why I am so pissed about the whole “no girls” thing. In addition to illustrating how they remain creatively stuck in the 60′s, DC is leaving money on the table by continuing to make their merchandise exclusive to boys.

And they are exclusive. I know many would argue that a kid should be able to handle playing a character that’s not their own gender sometimes. I agree! But why should that mean only the girls have to suffer that?

Because sure. Cassie could have played the game as Green Lantern, or the Flash, or whatever. But that’s all she would have been doing. Playing a game.

When you’re a kid, playing a game is only part of the experience. The game is a gateway into imagining that you are a superhero, fighting off villains as they try to destroy the Watchtower. It is that imagination that makes a crappy board game fun.

Don’t believe me? The first time we played, Cassie picked Hawkgirl. Then, as I was setting up the board, she ran from the room. A few minutes later she returned in her full Hawkgirl costume. Mask and mace and utility belt. Even the shoes.

She played the entire game in costume. Never took the mask off once, even as we drank and snacked and played for hours. I had to address her as Hawkgirl, and she would only call me Flash. She’s a method actor.

Today we played again. Cass picked Wonder Woman to be, and ran out, returning in her Wonder Woman costume and staying in character the whole time. 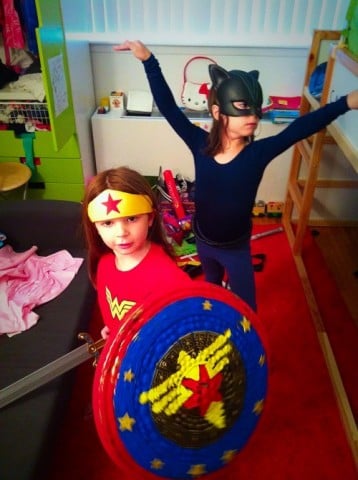 I try to understand why games might consider culling female characters. Sure, I could start shouting things like “sexism!” and “misogyny!,” and maybe that’s part of it, but I think businesses tend to make decisions based on more monetary concerns. Maybe statistically it’s more likely to be four boys playing, and they want to cater to that. But if so, it’s a self-fulfilling prophecy. If you market only to boys, don’t be surprised boys are your only market. And don’t be surprised if the boys with sisters and female friends end up playing something else entirely.

When comics and game designers exclude or otherwise diminish the role of female characters, they are really telling girls they are not welcome. That sure, they can play, but they can’t have full immersion. Full immersion is for boys only.

I fixed this shitty game, but I shouldn’t have had to. We have a right to expect (and demand) that comics companies and the game designers they license to do better. Sure, it’s a free country and they have a right to make boys-only games if they want, but we don’t need to support it, or stay quiet about it.

Peter V. Brett (www.petervbrett.com) is the internationally bestselling author of the Demon Cycle (The Warded Man, The Great Bazaar, The Desert Spear, Brayan’s Gold, The Daylight War, and the upcoming The Skull Throne) and Red Sonja: Blue and Unchained. Raised on a steady diet of fantasy novels, comic books, and Dungeons & Dragons, Brett has been writing fantasy stories for as long as he can remember. He received a bachelor of arts degree in English literature and art history from the University at Buffalo in 1995, then spent more than a decade in pharmaceutical publishing before returning to his bliss. He lives in Manhattan.