But Why, Though? DC’s New Licensed T-Shirts Suggest Some Terrible Things About Women

Must be a day of the week ending in "Y." 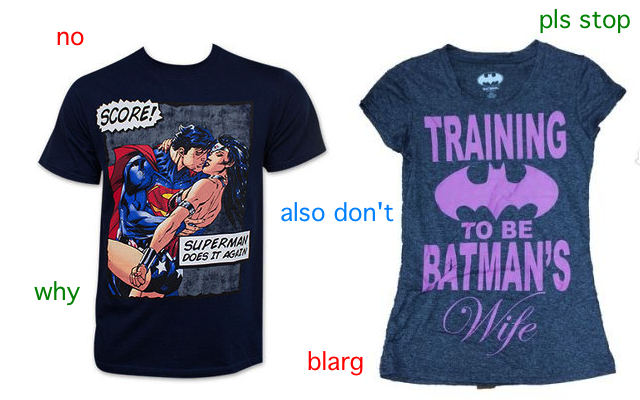 It’s Monday and we can only spend so many brain cells being frustrated with DC’s marketing and licensing department on a regular basis, so let’s try to ease you slowly into the annoyance you’re about to feel. Here is the good news: they made a shirt designed for young female wearers, and another shirt for men that has Wonder Woman on it! Let’s just bask in that vague knowledge for a second before actually looking at the shirts and aaaaaargh.

So let’s break it down, for people who aren’t able to view the images (or who perhaps temporarily lost their ability to decode visual stimuli due to anger). On the left, we’ve got a men’s shirt that depicts a scene inspired by Superman/Wonder Woman, which, you’ll remember, was a romance themed title developed last year to appeal to women since why would we ever want to read a comic book that’s not about kissing? (edit: it’s actually from a cover of Justice League 12, however, because DC does sure love their crossovers) The text reads “Score! Superman does it again!,” because as we all know, mackin’ on Amazon warriors is one of America’s national past times and we are required to assign the practice a points system just like we do in baseball.

Also, Wonder Woman’s a lasso-less “it” now, we guess. Yeah, that’s why her arm’s all weird at the bottom of the shirt; she’s supposed to be lassoing Superman in the picture. But why present a powerful female superhero using one of her trademark symbols as a marker of sexual agency when you can instead present her as a stiff, rigid board to be scored upon?

On the right is a shirt from the juniors department of Walmart, which says “Training to be Batman’s,” and then “wife” in a different more stereotypically feminine font. It’s a little known fact, but you are not allowed to spell the word “wife” in any font other than cursive. We are breaking laws for you right now, dear readers. Anyway, this is despite the fact that being married to the caped crusader sounds like the worst idea ever, regardless of what Jill Pantozzi glibly thinks (and by the way, you are going to have to fight her for him, so maybe that’s where the training kicks in). You would probably have a much deeper emotional connection to the man if you were actually training to become his sidekick instead, but if we’re going to cling to traditional gender roles that define women in their relation to wifely duties, at least the shirt should say “Training to be the mother of Earth-Two‘s Huntress.” Then you get to be Catwoman. Isn’t that nice?

Now on their own, devoid of context, these are not completely the worst. The “training to be ___” is a popular fad in non-licensed fandom-based athletic gear—although most shirts of this ilk usually want you to train to be Batgirl or someone similar, not to marry someone with terrible commitment issues. But together, these are licensed shirts. Somebody at DC decided that it was a really great idea to indirectly depict women as love-obsessed prizes, and then somebody else got the licensing rights squared away, and then they made these and are now selling them for real cash money.

You know what would be really cool instead, DC? Let’s have a bunch of t-shirts for little girls that depict Supergirl or Batgirl being a badass, or maybe a Justice League shirt for boys that doesn’t ignore the fact that Wonder Woman is a member. Given the number of messages we get from parents on a weekly basis, we’re gonna go out on a limb and say those would sell much better.

Previously in No Why Stop