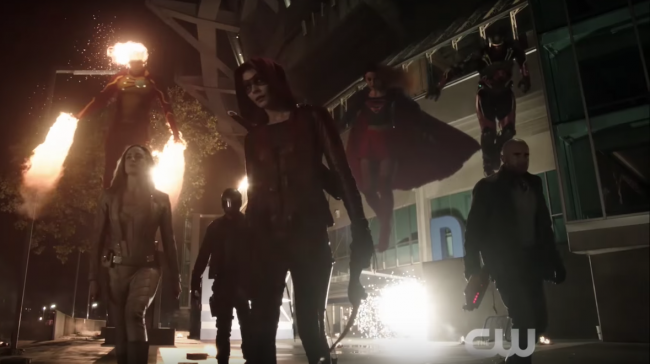 This new quick hit promo for the DC TV universe mega crossover should give you a proper, invigorating kick in the pants.

It’s got some interesting pairings, some old (Flash telling Arrow what’s up with the literal aliens coming to invade them) and some new (Heatwave verbally sparring with Supergirl, who isn’t having any of that). As you should already know by now, the crossover event takes place over four nights, with each show—The Flash, Arrow, Supergirl, and Legends of Tomorrow—taking on one part of the whole story. It’s just like a good old classic comic book crossover.

The crossover, titled “Invasion!” (yes, including the exclamation point), centers on the conflict that arises when an alien species called the Dominators come to Earth to eliminate the threat of meta-humans before they can spread. It’ll be up to the Flash, Arrow, Supergirl, the Legends of Tomorrow, and everybody they know to put an end to their, uh, domination.

So, you know, if you haven’t caught up on your DC TV superheroes, then now’s probably the time. You’ve still got room for some television watching after eating all that Thanksgiving food, right?