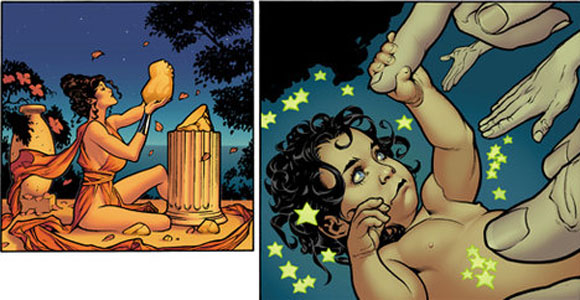 The spoilers won’t come until after the jump but you’re probably going to have a tough time steering clear of this one. Why? The big reveal doesn’t happen in Wonder Woman #2, out October 19th, it comes a whole month later in Wonder Woman #3, being released November 16th. Today, the DC Source Blog and the NY Post revealed that in Brian Azzarello and Cliff Chiang’s relaunched Wonder Woman title, the most famous Amazon would be receiving a new origin story.

In a move that is sure to enrage some of the fanbase, DC has decided to give Wonder Woman a father. And not just any father but the King of the Gods himself – Zeus.

When you first hear this, it tends to make a lot of sense. Wonder Woman’s origin story is one of the most bizarre in comics books. She’s not an alien, she didn’t get bit by a spider – her mom made her out of clay (with a little help from a goddess). Originally, Diana was just the best of the Amazons, blessed by Aphrodite, but eventually her origin story was tweaked to include the fact that her mother Hippolyta, desperate for a child on an island with no men, molded a daughter out of clay which Athena then made,  “beautiful as Aphrodite, wise as Athena, swifter than Hermes, and stronger than Hercules.”

It’s an origin many found odd and that non-comic readers had a tough time wrapping their heads around and one DC decided to finally do away with via their relaunch. “She’s going to learn she’s not who she was told she was,” Azzarello told the NY Post. “Everybody’s got a father,” he said. “Even if he’s not the nicest guy in the world.”

Wonder Woman #1 was the 12th DC relaunch title to sell 100,000 copies. The announcement comes way in advance of the issue hitting the stands (something that is a constant annoyance to regular readers) but the week of New York Comic Con, where the publisher is likely to be speaking about the big news and possibly other alterations of characters in this new DC Universe.

Azzarello told the newspaper he went back to the original myths we’re familiar with. “There are going to be some family issues,” he said of the Gods, “They’re pretty nasty people,” but “they can also do a lot of good. They’re like a mirror of human beings, turned up to 11.” The writer also referred to the Olympians as the “original crime family.”

I’m not exactly sure what to make of the changes yet, especially not having read the issue, but I see this both as a good thing and a bad thing. It’s a good thing because an origin where Wonder Woman has a father who is a god makes a lot more sense in the scheme of things and will be easier for new readers to comprehend. It’s a bad thing because if, as Azzarello states, he’s going back to the original myths well…lots of Greek Gods raped women (Hercules and his army did as much to the Amazons in the 80s) which in turn created half-gods and the like. We don’t know if that will be the case yet with Wonder Woman but if it is you can imagine the implications of doing such a thing to the feminist icon.

Even if they don’t go that route, even if Hippolyta and Zeus were in love, this is huge. Tying a group of women known for their strength and independence to a man is a major issue. Imagine discovering Bruce Wayne was adopted by Thomas and Martha Wayne and that his real parents are still out there or that Superman was really a human stolen from Earth and brought back to Krypton to be experimented on. The DC Blog says, “She remains Wonder Woman. Strong. Proud. Fearless.” I’m sure we’ll be hearing lots more about this in the days to come.