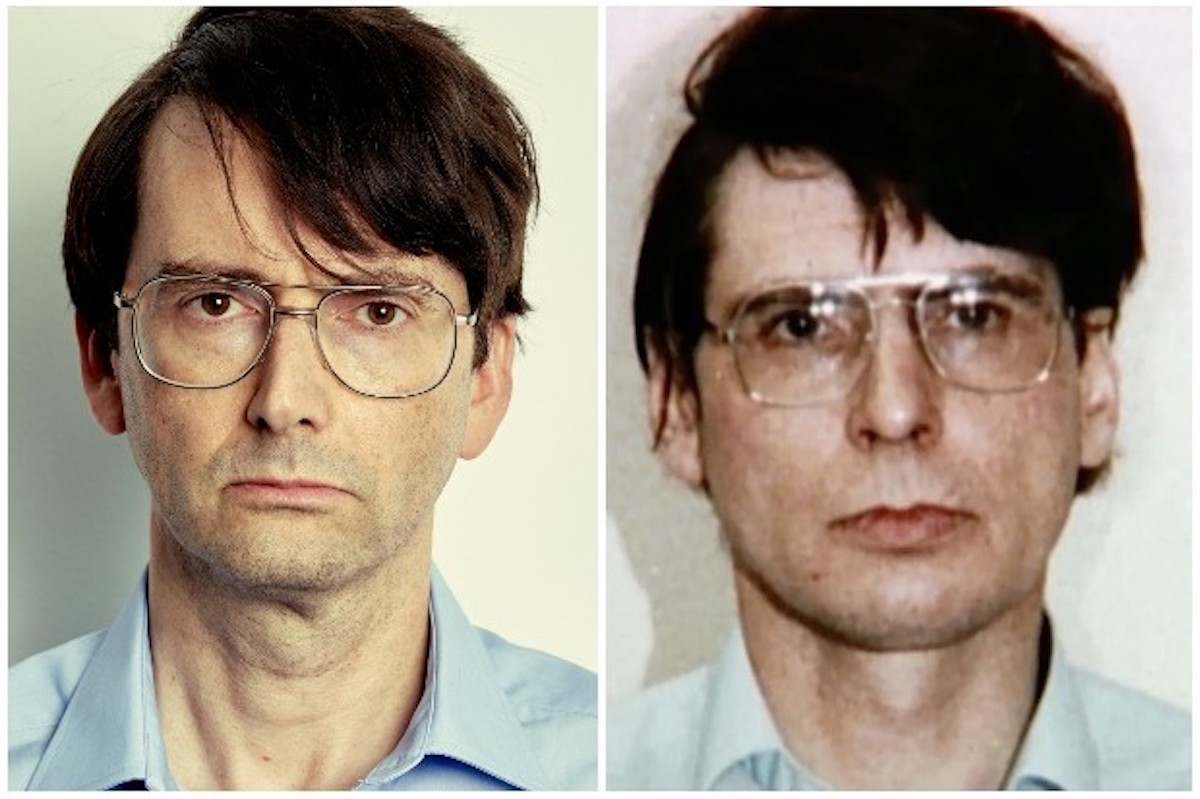 David Tennant is incredibly good at playing deranged villains. For such a nice-seeming guy and father of five, the Scottish actor—who rocketed to stardom as the soulful Tenth Doctor on Doctor Who—has played the hell out of some creepy characters. Continuing the trend is his role as the eponymous killer in Des, a true crime three-part miniseries that grabbed huge ratings in the U.K. and is set to drop stateside on October 15th, 2020.

In just the last few years, Tennant has had murderous turns on Criminal, Deadwater Fell, and of course his terrifying Kilgrave on Jessica Jones. Even his casting as the antihero Crowley in Good Omens demonstrated that Tennant is a natural fit for demonical parts. As the featured role in Des, Tennant embodies something far more frightening than a fallen angel: he’s Dennis Nilsen, a withdrawn civil servant who also happens to be one of Britain’s most famous serial killers.

Nilsen, who was Scottish, killed at least twelve young men and boys between 1978 and 1983 in London, and attempted to murder at least seven more. He often preyed upon young men who were homeless, down on their luck, and grateful for an offer of shelter. While he’s not as well-known in America, Nilsen “cast a long shadow over British culture,” as Tennant put it in a recent interview.

The dire socioeconomic conditions in Margaret Thatcher’s Britain during this period contributed to Nilsen’s having a pool of ready victims; Des shows this by opening with real-life footage from that era of people sleeping rough and desperate for employment. Actual footage is intercut occasionally throughout the dramatic miniseries, grounding us in the realities of the story being told. That so many were slipping through the cracks can also help explain why Nilsen was able to kill for such a long period of time without being found out. The majority of his victims were homosexual, like Nilsen, and homophobia also played into why police were dismissive about some reports of Nilsen’s behavior and in investigating missing persons.

Nilsen worked as a police officer himself in 1973, a fact that the detective investigators in Des uncover to their dismay. Later settling into a position at a job center, Nilsen was known as “a quiet, conscientious employee,” and went under the radar until his arrest after human remains were found in the drain outside his house. Nilsen seemed like such an unlikely murderer that we learn his coworkers at first refused to let police search his desk, not believing he was capable of such acts.

The crimes committed by Nilsen are beyond horrific, and did not stop with murder—he was also a necrophile who kept the bodies of his victims in his flat until too much decay forced him to burn and bury them. But what makes Nilsen so frightening—and Tennant’s performance so brilliant—is how utterly bland and humdrum of a man he seems to be. No one appears less likely on the surface to commit these atrocities than Dennis Nilsen. And Tennant disappears into the role, making you forget that you’re watching a star at work.

Reserved and matter-of-fact, Nilsen lists off ruthless crimes and confesses to multiple murders with as much emotion as a man reciting his grocery-list. You watch Tennant as Nilsen, describing everything he’s done with calm detachment, and think to yourself, “This shouldn’t be possible.” Nilsen is the starkest reminder I’ve seen onscreen that monsters can wear the most mundane of masks.

Des has a setup unlike any true crime or murder mystery I can recall. There is zero violence, killing, or “action” actually shown. It kicks off with Nilsen’s arrest and subsequent interrogation and trial, rather than the approach of searching for the killer. This is due to the timeline—Nilsen was not on the police’s radar at all prior to the discovery of human remains on his property. And Nilsen’s actual behavior sets up the perfect frame for the man to reflect upon his past. When body parts were first found at his flat, Nilsen told officers:

“It’s a long story; it goes back a long time. I’ll tell you everything. I want to get it off my chest. Not here—at the police station.” He was then arrested and cautioned on suspicion of murder, before being taken to Hornsey police station. As he was escorted to the police station, Nilsen was asked whether the remains in his flat belonged to one person or two. Staring out of the window of the police car, he replied, “Fifteen or sixteen, since 1978.”

Interwoven through scenes of Nilsen’s confessions, interrogations, and later jailtime visits with his biographer Brian Masters are the police’s efforts to uncover Nilsen’s long-buried victims as well as tie him to the crimes. They’re lead by one of my favorite British actors, Daniel Mays (so ferocious on Line of Duty), who plays Detective Chief Inspector Peter Jay with dogged intensity.

Des does an excellent job with its aesthetic backdrop, making you feel like you’re watching something straight out of the ’80s only in perfect high definition. The costumes and attitudes—not to mention an almost exclusively white male power structure—are on point, and everyone is constantly chain-smoking cigarettes like they’re about to go out of style (they are).

We get a few hints of life outside of Dennis Nilsen’s bleak charnel house and later cell. DCI Jay has a troubled marriage, which causes the case to consume him all the more. The aesthete Masters (played pitch-perfectly by The Crown’s Jason Watkins) seems to occupy a sort of posh, protected gay identity unavailable to either Nilsen or his victims. Masters, a wealthy author, is shown sometimes with the trappings of luxury and a loving, handsome partner. He’s drawn to the case by the desire that a queer writer be the one to relay Nilsen’s story. Masters’ resulting 1985 book Killing for Company: The Story of a Man Addicted to Murder was the inspiration behind Des.

Watkins’ scenes with Tennant—the writer’s unease, disgust, fascination, and even occasional sympathy for the killer—really propel the narrative forward. As Masters concluded of his subject, Nilsen is “not a stranger amongst us,” but rather “an extreme instance of human possibility.”

If anything, I wish Des could have shown even more of the personal lives and socioeconomic realities of this era, but considering all of the “characters” are actual people, it’s understandable that dramatic liberties would be curtailed. And there’s more than enough “story” to be told considering the length and appalling nature of Nilsen’s killing spree. His trial in the third and final episode of the miniseries is perhaps the most compelling chapter, raising questions about who gets to be counted as a victim and the role of media in high-profile cases. And you may wonder, as Masters seems to, whether a man who can calmly boil a victim’s head on his kitchen stove and then make himself some tea can really be classified as “sane,” premeditation or not.

Tennant recently spoke to The New York Times about the role. His performance has garnered many accolades, with The Times of London declaring that “to make a character simultaneously dull and mesmerizing takes quite some talent” and The Daily Mail calling it “career-defining.” Tennant thinks that viewers are drawn to true crime and Des in particular because “We all just want to understand how these things are possible.” He continued:

And telling these stories is an attempt to understand them, to possibly exorcise the demons of them. And it’s also to memorialize those victims. There were people who really slipped through the cracks in society — that’s who he preyed on — people who didn’t have the means or ability to look after themselves. It’s an interesting time to be doing this in a way, as we’re entering another phase of economic turmoil where you sense the number of people who aren’t supported by society is growing again.

Tennant also notes that the narcissistic Nilsen, who died in 2018, likely would have loved such a high-profile series about him. But he would have hated that it wasn’t told from his perspective. In Des, we’re always on the outside looking in, and though Nilsen often tries to psychoanalyze himself, in the end, there’s no real explanation or any conceivable “excuses” for his crimes. And that may be the scariest realization of all: that people like Dennis Nilsen aren’t made, but simply are, and are closer to home than we’d like to imagine. As Tennant observes:

I think that’s the thing with all these stories, those tiny moments when your own life has a similarity: How close are any of us from stepping into an abyss from which we can never get over again? It’s impossible to ever know, but I think it’s one of the duties of drama to try and unpick why we do what we do.

Proximity to a killer who is both stunningly “normal” and capable of such outrageous actions, coupled with strong performances, make for a TV-watching experience you won’t soon forget. Ultimately, Des doesn’t provide answers for why Dennis Nilsen did what he did, but it brings you to the awareness that some mysteries are simply impossible to solve, even when the culprit is apprehended.