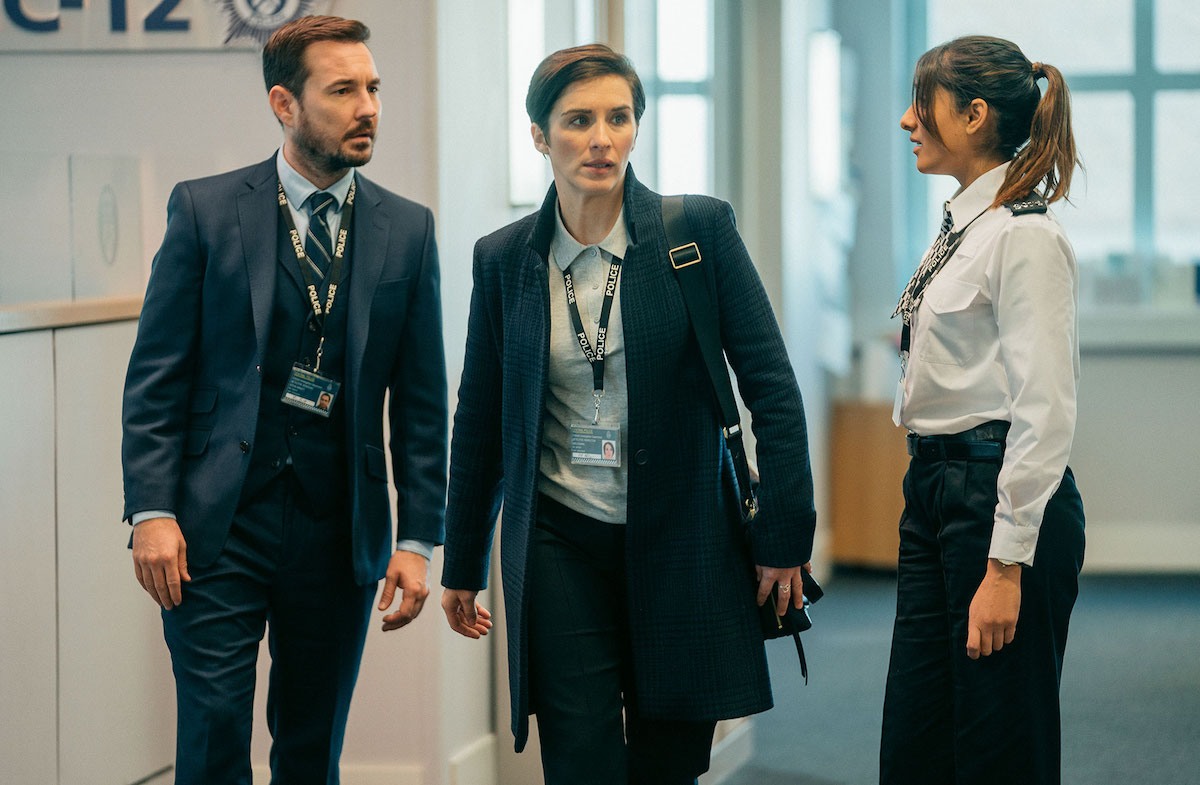 I’m several years late to the party, but in the last week and a half my only occupation at night has been to binge-watch the popular drama Line of Duty on Acorn TV’s streaming service, which is like Netflix for prime British content. I was tipped off to the show when Acorn TV sent a press release about a Line of Duty season 5 episode winning the prestigious Edgar Award for its teleplay from the Mystery Writers of America, and decided to check it out. I haven’t been heard from since.

The premise of Line of Duty is simple, considering the show’s trademark gotcha complexity. In an unnamed British city (based around Birmingham in the first season, which began in 2012), the police anti-corruption unit AC-12 investigates incidents of possible police misconduct. After the events of the first season, they’re especially interested in “bent coppers” (that’s a crooked cop for my fellow Americans) and their links to the organized crime gang that’s always popping up around town with balaclavas and assault rifles.

The show can be totally over-the-top, but it’s also compellingly watchable and often thrilling, a masterpiece of misdirection that keeps you guessing. I like nothing more than surprise twists I didn’t see coming yet still feel earned, and these are the foundation upon which the plots are built. I’m crushed that season 6’s filming was paused due to the pandemic. I need more Line of Duty.

There are three main characters—Steve Arnott (Martin Compston), the righteous-to-a-fault detective who came out of counter-terrorism after he refused to lie about a mission that killed an innocent man; Kate Fleming (Vicky McClure), the unflinching undercover specialist who infiltrates corrupt units; and their “gaffer,” Superintendent Ted Hastings (Adrian Dunbar), a stickler for the rules (except when he’s not). Line of Duty does a great job of letting us into little bits of the characters’ personal lives so that we come to care about them, without ever derailing from the main mystery at hand.

Each season revolves around a new AC-12 case and often a featured bold name guest star who is at its heart, like Lennie James (season 1), Keeley Hawes (season 2), Thandie Newton (season 4), and Stephen Graham (season 5). We usually go deeper into the headspace of the guest leads’ characters than the AC-12ers, so each season has a different feel and flavor. The acting from everyone on Line of Duty, from seasoned movie stars like Newton down to the smallest walk-on role is excellent, rendering even the most convoluted situations convincing.

I’m usually not a big fan of shows about police officers, but Line of Duty takes pains not to glorify that position. In fact, AC-12 is there because so many cops are either actively corrupt or have gone rogue to hide their own questionable actions. Consider that AC-12 is only one anti-corruption unit of many in their city, and that’s a whole lot of bent coppers. There’s a certain catharsis to watching Line of Duty right now—both the satisfaction of resolving a crime, and the idea that sometimes institutional corruption and bad leaders can be exposed to the harsh light of day.

The show also encompasses themes around racism, sexism, nationalism, sexual violence, exploitation of immigrants, for-profit prisons, and other hot-button issues, sometimes literally beating the characters over the head with them, other times building up a problem to come to a head after years of slow boil. There’s a truly impressive through-line of continuity; actors who appeared in passing in season 1 are suddenly back in season 5, the events of season 2 become the hinge-point of season 3; a simple statement made seven years ago is suddenly crucial to solving a brand new case.

Where Line of Duty gets you is that you’re never on solid ground. As soon as you think you know what’s really going on or have guessed the culprit or the motivation, everything changes. Each season kicks off with a wildly dramatic first episode that sets up the mystery to be unraveled, and appearances are almost always deceiving.

My favorite season is season 3, which begins with a firearms officer named Danny Waldron (played ferociously by Daniel Mays) seeming to act with chaotic brutality, but—of course—it’s a much larger game that brings us back to the systematic police corruption established in the show’s beginning, and a wider conspiracy that’s somewhat “ripped from the headlines.” I think I held my breath for most of it.

I was still just barely recovering from Keeley Hawes’ show-stopping season 2 performance as a detective accused of setting up an ambush and subject to degradation in prison. There’s quite a bit of violence and disturbing subjects on Line of Duty, yet the presentation isn’t overly gratuitous—for example, there’s an episode where immigrant women are being trafficked into sexual slavery, but the show doesn’t feel the need to show us that happening. The women’s reactions when they realize where they’ve been lead is enough, and I won’t soon forget it.

There were many times when Line of Duty made me so nervous that I had to look away, but I could never stop watching. It can be difficult to take in; innocent people suffer and results are often unfair, but this provides a realism that grounds the show despite some high-flying action that ramps up over the years. With each season running six episodes in length, I have spent more than 30 hours watching this show in recent days, and I’m not really sure what to do now that I’ve made it through to the end of season 5. Maybe go for more content from its creator?

Line of Duty comes from creator/director Jed Mercurio, who was behind the nail-biting Bodyguard series starring Richard Madden and Keeley Hawes (who is really tearing it up). While I’d seen Bodyguard on Netflix after a lot of positive hype, forgive me for not knowing about Line of Duty. The show is hugely popular in its native Britain, but only just started airing in the US on AMC (which owns Acorn TV, where you can stream it in full). Mercurio also created the shows Bodies, The Grimleys, and Critical, all of which are now going on my watch-list.

Acorn TV gave me press access to the show, but if you want to check out Line of Duty and many, many, many more shows and movies out of Britain, Ireland, Canada, New Zealand, Australia, Mexico, Spain, and more on the service, I highly recommend it. A lot of this content hasn’t been available to us stateside, and I’ve found it comforting as of late. The programming on Acorn runs the gamut of every conceivable mood, from cuddly shows about English villages to all the murder in the countryside you could want to solve.

Acorn TV has extended its free trial offer to 30 days during our trying times, which you can test out if you go to http://acorn.tv and use the code FREE30. After that it’s $4.99 a month to stick around. Please join me in my newly discovered Line of Duty fandom so that I have someone to talk to about the latest twist I couldn’t see coming.

(via Acorn TV, image: BBC One)