Now it Can Be Told: What David Said to The Engineer in Prometheus 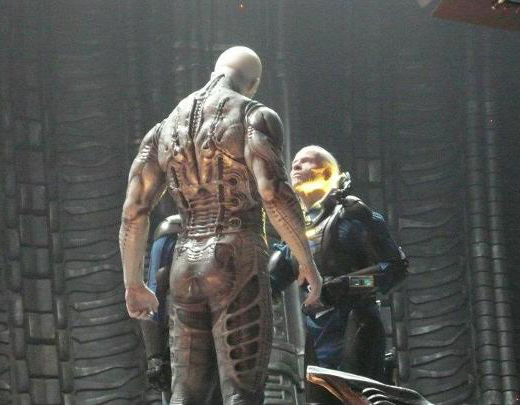 I’m going to work really hard not to drop any spoilers from Prometheus, but those who have seen the movie will remember a particular scene between David (Michael Fassbender) and a certain milk-skinned alien. Fassbender’s speech is untranslated and indistinct, but an expert who worked on the movie confirmed that he said, “/ida hmanəm aɪ kja namṛtuh zdɛ:taha/…/ghʷɪvah-pjorn-ɪttham sas da:tṛ kredah/.” Did you get all that?

Spoilers from here on out.

For those who have seen the film, I’m of course talking about the scene where David speaks on behalf of his creator Peter Weyland to what is ostensibly Weyland’s creator. As you will recall, the Engineer then flips out and murders everyone in the room — presumably for daring to speak to him. If this behavior wasn’t perplexing enough, what David said was left untranslated.

Earlier in the movie, David is shown studying Proto-Indo-European — the ancient tongue which linguists believe spawned a great many of today’s modern languages. The conceit presented in the film is that the oldest human language should be similar to what the Engineers speak.

In fact, David’s holographic language tutor is real, live linguist Dr. Anil Biltoo from London’s SOAS Language Centre. In an interview with The Bioscopist, Biltoo finally translates this mysterious bit of the film:

The line that David speaks to the Engineer (which is from a longer sequence that didn’t make the final edit) is as follows:

A serviceable translation into English is:

‘This man is here because he does not want to die. He believes you can give him more life’.

Apparently. the script called for David to have a much longer conversation with the Engineer that was filmed but ultimately cut from the theatrical version of the film. However, Biltoo says that he’s eager for a director’s cut which he believes will restore the entire back-and-forth. There might even be subtitles!

That clears up one minor mystery. Now, what can we do about the rest of the movie?

(The Bioscopist via Badass Digest, image via Collider)