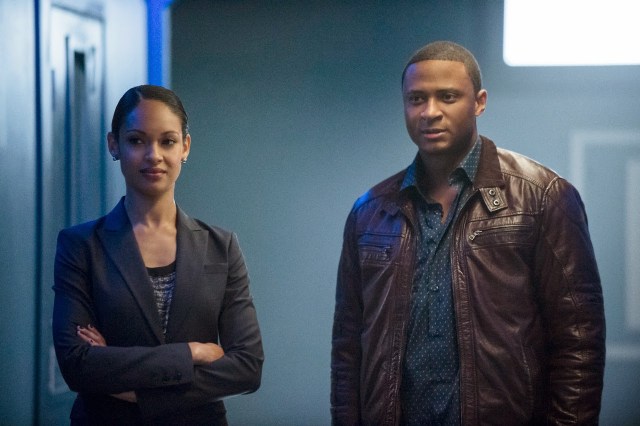 The CW’s Arrow was a bit of a slow burn for me, but once I caught fire, that was it. So I was thrilled to get to speak with the cast and creators at San Diego Comic-Con recently and get a little dirt on what’s to come in Season 3. Thankfully, David Ramsey (aka John Diggle) was more than forthcoming dropping names like John Stewart and phrases like “Suicide Squad spinoff.”

Speaking with a group of journalists, The Mary Sue included, at the show, Ramsey was asked if he’s ready for his own superhero costume. He cautiously and jokingly responded, “Um, no… I’m good.” He continued:

I mean, there’s been discussion about who John Diggle really is in the DC universe, and they’ve thrown around John Stewart if you guys know who he is. Well there’s been talk about all that, but right now, moving forward, what they really want to get involved in this whole A.R.G.U.S. thing and Suicide Squad and the investigation of H.I.V.E.—the organization that hired Deadshot to kill Andy. We’ll be seeing that in some flashbacks of who Andy was because Andy wasn’t the guy that John Diggle thinks he was. He was actually the mark, so we have to get into some of that and his relationship with A.R.G.U.S., because that will be fleshed out.

Ramsey also replied to a question about his particular involvement in Season 3 in which he said you can expect to see Diggle kicking some more ass. “In this third episode, actually, there’ll be some because we go away. We go away someplace—I can’t tell you where—but it’s a big Diggle episode in Episode 3,” he said. “I had one the first season, had two last season, this year, I think I’ll have more, so who knows? Suicide Squad, I mean, they’re talking about spinning Suicide Squad off as a whole thing. I don’t know if they’re really going to do it, but they’ve been talking about it. But we’ll see.”

When pressed for more info on that particular train of thought, Ramsey explained to the group:

Yeah, people really respond to the Suicide Squad, and they responded to Deadshot a lot, and Harley Quinn and Bronze Tiger. The kind of consensus is that, the writers and producers, they see this stuff in social media. They see this stuff on the boards, and they don’t completely bend their will to it, but they answer the questions, and the curiosity leads the writing to a certain degree. Suicide Squad is no different. So some of the talk has been kind of connecting the tissue of the last season to the beginning of the next season with maybe some Suicide Squad during the hiatus. Perhaps. That’s been one option. The other option has been having it as two or three episodes during the season. So it’s just been conversations at this point. It’s just a whole lot of tape with DC and who you can bring. You guys know they just got Ray Palmer – they wanted somebody else – so there’s a lot of approval that has to go into who comes with this stuff. So it’s all talk at this point.

Sounds very similar to what Marvel Entertainment is planning with their Agent Carter TV show airing between the winter break of Agents of SHIELD but obviously, as Ramsey said, it’s all talk at this point. However, we can expect more of team-ups for Season 3.

“[Diggle] has both a role with Suicide Squad and A.R.G.U.S., and that’s going to be clear—very clear in the beginning part of this season—that A.R.G.U.S. will play a big role in assisting the team, and Diggle and Lyla, Lyla who is now the head of A.R.G.U.S., will be a big part of that,” he said. “And who knows? She may not be the head of A.R.G.U.S. by the time the season ends. I’m just saying. Somebody else might be. I’m just saying.”

More from the Arrow crew at Comic-Con later this week!