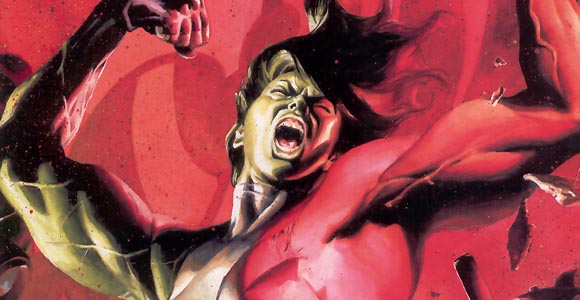 Last night, a podcast called Scriptnotes interviewed a panel of screenwriters before a live audience. “The Summer Superhero Spectacular” panel included Andrea Berloff (The Legend of Conan), Christopher Markus and Stephen McFeely (Captain America: The Winter Soldier), and David S. Goyer (Man of Steel). Podcast hosts John August and Craig Mazin asked the screenwriters a few questions on how they approached the genre of superheroes and mythical warriors. As expected, Goyer answered some questions but avoided giving away spoilers on his upcoming projects bringing the DC Comics Universe to live-action. But it’s the way he spoke about a Marvel Comics hero which got our attention.

If you don’t know, Goyer has been announced as a writer and producer on The Sandman and the writer for Justice League. He’s also credited with co-writing the story for the still untitled Man of Steel sequel [Editor’s Note: It got a title just a few hours after we posted this story!] featuring Superman, Batman, and Wonder Woman in her first big screen, live-action appearance. Goyer became more open about his thoughts when the hosts randomly assigned each a superhero and asked them to discuss how they’d go about adapting the characters for film or television. This led to some interesting and confused discussion, as the hosts’ knowledge of the comic characters turned out to be inaccurate or vague at times. The Hulk came up as a reboot possibility and then the discussion veered into the topic of Jennifer Walters aka She-Hulk, the gamma irradiated cousin of Bruce Banner aka the Hulk.

As She-Hulk was the topic of my most recent Agent of S.T.Y.L.E. column, my ears perked up. Markus joked that She-Hulk “has the worst, most demeaning character name possible. You’re just a female version.” This is definitely a discussion I’ve had myself concerning how often female superheroes are given feminized names of an already existing male character. I’m sure many of you have as well. Then things got gross.

Host Mazin explained his own view of the character and Goyer tossed in his two cents, which we’ve transcribed here:

Craig Mazin: The real name for She-Hulk was Slut-Hulk. That was the whole point. Let’s just make this green chick with enormous boobs. And she’s Hulk strong but not Hulk massive, right? … She’s real lean, stringy…

David S. Goyer: She’s still pretty chunky. She was like Chyna from the WWE.

Mazin: The whole point of She-Hulk was just to appeal sexistly to ten-year-old boys. Worked on me.

Goyer: I have a theory about She-Hulk. Which was created by a man, right? And at the time in particular I think 95% of comic book readers were men and certainly almost all of the comic book writers were men. So the Hulk was this classic male power fantasy. It’s like, most of the people reading comic books were these people like me who were just these little kids getting the shit kicked out of them every day… And so then they created She-Huk, right? Who was still smart… I think She-Hulk is the chick that you could fuck if you were Hulk, you know what I’m saying? … She-Hulk was the extension of the male power fantasy. So it’s like if I’m going to be this geek who becomes the Hulk then let’s create a giant green porn star that only the Hulk could fuck.

Just to clarify some points, She-Hulk was indeed created in 1980 by men: Stan Lee and John Buscema. And generally, She-Hulk is not portrayed as the only woman the Hulk can have sex with because first and foremost, they’re cousins, and the Hulk has had several romantic interests in the comics. Also, we’d be remiss if we didn’t add it’s an extremely offensive thing to say about a female character. Since her introduction, She-Hulk has been a woman of agency and strength, one who quickly took control of her mutation to become a hero and who has never let herself be held back by sexist double-standards and the expectations of others who can’t handle her power, intelligence and sexual confidence.

But then the hits kept on coming as the conversation turned to a fan-favorite DC Comics character. Goyer was asked how he would translate the J’onn J’onzz aka Martian Manhunter to film. As Goyer is one of the people in charge of bringing the DC Universe to live action, this was definitely a topic where his ideas carried weight. In response to being asked about the hero, Goyer asked, “How many people in the audience have heard of Martian Manhunter?” After hearing some light applause and cheers, he added, “How many people that raised their hands have ever been laid?”

Way to fall back on outdated stereotypes of your core viewing audience.

After this, Goyer explained his take on the hero: “Well, he hasn’t been rebooted but he’s a mainstay in the Justice League. He can’t be fucking called the Martian Manhunter because that’s goofy. He can be called Manhunter… The whole deal with Martian Manhunter is he’s an alien living amongst us… So he comes down to Earth and decides, unlike Superman who already exists in the world now, that he’s just going to be a homicide detective… So instead of using super-powers and mind-reading and like, oh, I could figure out if the President’s lying or whatever, he just decides to disguise himself as a human homicide detective. Dare to dream!”

To clarify, the Martian Manhunter has actually been rebooted if you include television. Even if you ignore the unaired Justice League TV-pilot, there have been a couple different versions of him across DC’s cartoon range and a live-action version with a notably different origin and nature who appeared in Smallville, played wonderfully by Phil Morris. It’s true that in the comics the Martian Manhunter did adopt the human identity of homicide detective (and later private detective) John Jones. But he did actually use his powers to solve cases and stop crimes in this capacity, he just did it clandestinely, and he continued to spend half his time operating as a costumed hero. So he actually didn’t choose to simply ignore his powers and just be a human being.

Goyer went on: “I would set it up like The Day After Tomorrow. We discover one of those Earth-like planets… So maybe like… we get the DNA code from that planet and then grow him in a petri dish here… He’s like in Area 51 or something and we’re just basically… doing biopsies on him. Then he gets out and he’s really angry and he fucks She-Hulk.”

So to recap. She-Hulk is just a sex power fantasy rather than a character with agency who from the beginning went down a different path than her cousin, The Hulk. Martian Manhunter being the last survivor of a race which died out on Mars over a thousand years ago is goofy, but putting him Area 51 and using the same plot as many alien visitor movies is not. And God forbid superheroes embrace some goofiness and absurdity.

We have a feeling we know what J’onn would say to all of this, but what do you make of Goyer’s comments?

[Note: Hey, here’s an interesting thing! As of this morning, the podcast episode in question “144: The Summer Superhero Spectacular” has been removed from the Scriptnotes website. But you can still find it on iTunes and listen for yourself.]

[UPDATE: The podcast is back up on their website.]

Alan Sizzler Kistler (@SizzlerKistler) is an actor and writer who moonlights as a comic book historian and geek consultant. He is the author of Doctor Who: A History.