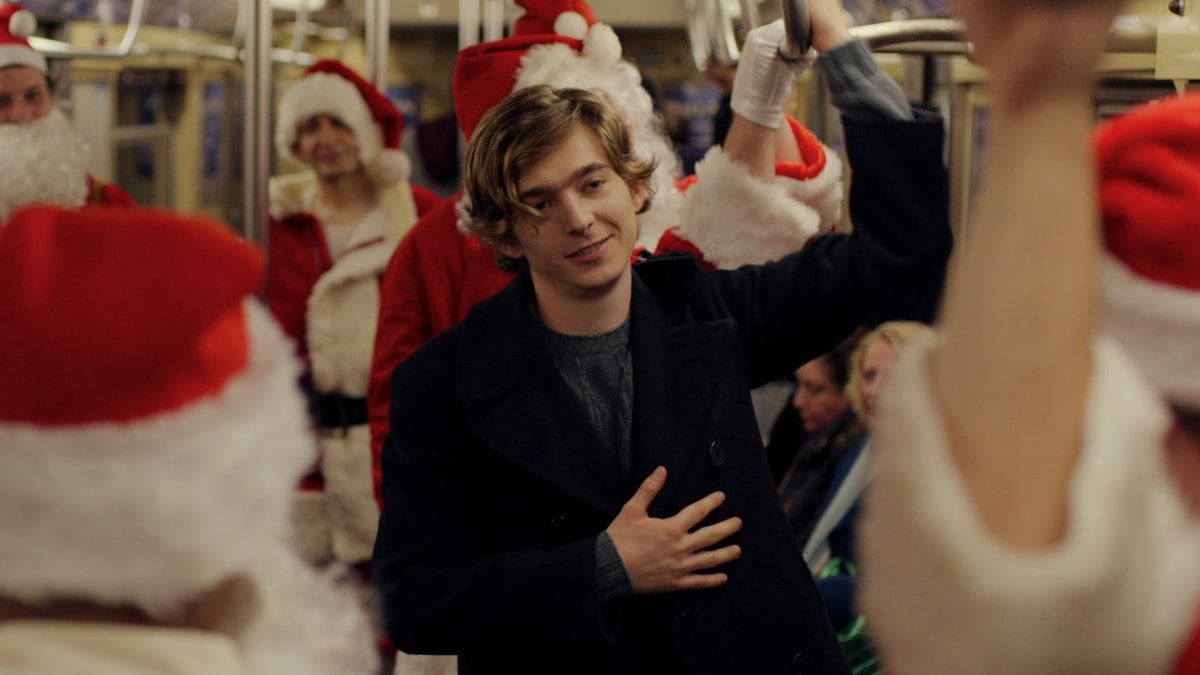 **Spoilers for Netflix’s Dash & Lily lie within and honestly go watch it first it’s so cute (but then come back).**

The holiday season in New York City is something that makes the city a truly magical place, and Dash & Lily takes that idea and runs with it in the most beautiful way.

From the writers of Nick & Norah’s Infinite Playlist (the novel), David Levithan and Rachel Cohn, comes yet another love story that is also a love letter to New York City. What I loved about Nick & Norah was the understanding of New York and the magic therein, and while Dash & Lily is giving me that same emotional connection, it also has one advantage: It’s coming at a time when we cannot physically experience New York in the way that we’re used to.

The minute I turned on Dash & Lily and watched as Dash (Austin Abrams) walked through the aisles of Rhe Strand and found a journal left by Lily (Midori Francis), I remembered the joy of wasting time near Union Square. I thought of the Union Square Holiday Market and how (for the first time since living in New York) I won’t be getting fun gifts for my family and friends there this year. (It is sadly canceled this year anyway.)

And yes, it hurt me specifically because Dash has to do a live reading of the song “River” by Joni Mitchell, a personal favorite of mine, and he goes to the top floor of The Strand and has to perform it as part of the dare that Lily leaves for him.

Dash & Lily hurts for many reasons but this feels like a personal attack pic.twitter.com/yxjiBF3PVE

The movie’s presmise is simple: Dash finds a journal in the middle of J.D. Salinger novels. When he goes to complain to Mark (Patrick Vaill) at the information desk, he’s encouraged to look at the journal.

Each new page has a different riddle he has to solve or a dare he has to complete, from filling out a series of blanks that ask if he’s going to be alone on Christmas to the reading of “River.” He does it all and leaves his own series of questions for the owner of the book.

As the show goes on, it turns from that holiday nostalgia I’m going to miss this year into completely understanding the character of Lily.

As someone who has always felt lonely in regards to romantic relationships and hated how people view me, Lily meant a great deal to me. The journal she left in the book store comes from an idea her brother Langston (Troy Iwata) and his boyfriend Benny (Diego Guevara) have. Lily’s dream had always been to fall in love in the aisles of The Strand, to the point where she’d aggressively come up to men in the Salinger section and start asking them questions. As a fan of Franny & Zooey, I respect the move.

But Lily, who was too afraid to put herself out there, finally listened to her brother and used her cousin Mark (the man at the information desk) to help her pull this off.

With each new twist, the show takes us on a different New York City path. From Dash’s uptown apartment (he’s staying at his father’s) to visiting Boomer (Dante Brown) at Two Boots, the show does an incredible job of showing New York and the logistical side of getting from place to place, even if Dash did take a train when he could have just walked somewhere.

But what I love most about Dash & Lily is that it also feels like a love letter to New York City during this time of year, which I understand completely. NYC is often so busy and frantic that we forget to appreciate the city we live in. We’re so constantly on the move and running from place to place that those little bits of magic that brought us here in the first place (or keep us in this city) are often pushed aside.

At Christmas, it just feels like everyone stops to appreciate that little bit of beauty together. We all make unnecessary trips to Rockefeller to see the tree. We go to Union Square or Bryant Park even though we know it’s going to make us angry or we’ll spend too much money. We get hot chocolate and freeze just to be outside and see everyone together.

So, for me, watching Dash & Lily gave me that little bit of New York I love so much because, this year, it’s more important to keep everyone safe and stay inside. So I’ll miss the snow, and I’ll miss the weird gifts that only I can bring home from the city, but I know that I’ll have this time again. When the world is somewhat back to normal, I can have that winter love story I dreamt of, just like Lily. And that’s why this show is so emotional and cute right now. (Honestly, I probably would have cried no matter what, but it just hits differently in 2020.)

Anyway, I’m going to need the world to figure itself out so I can go to our next company holiday party dressed like this: