Thor’s Roommate Darryl Might Be Back for Thor: Love and Thunder, Thank the Asgardian Gods. 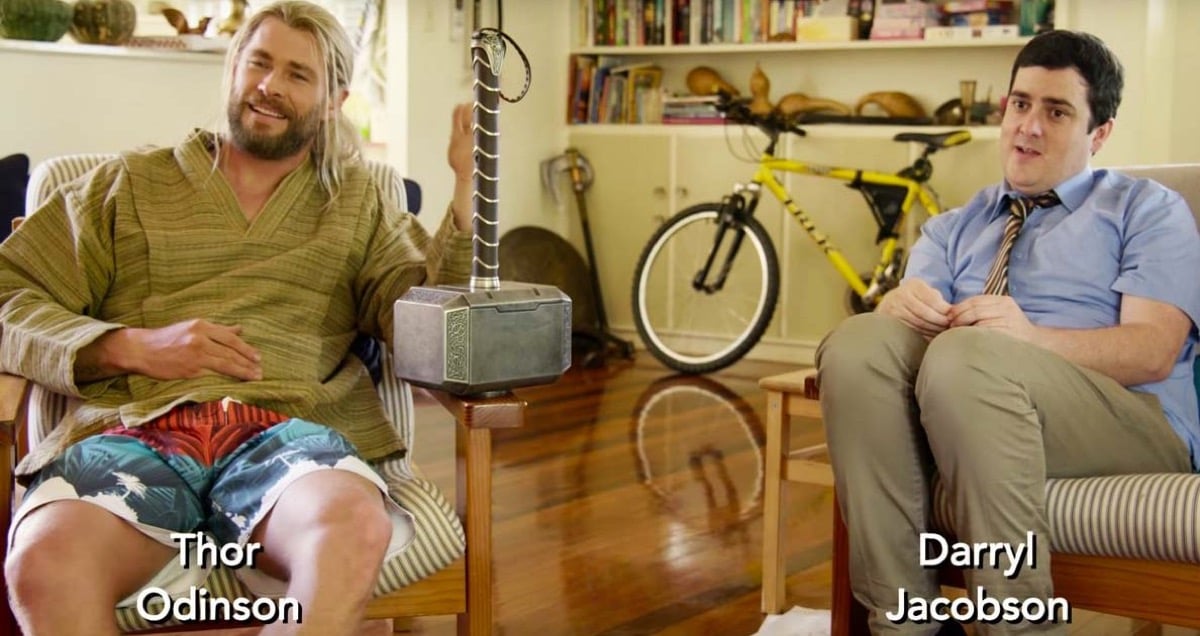 Remember when Thor was nowhere to be found during Captain America: Civil War and we all wanted to know why he wasn’t fighting? Well, if you remember that, then you might also remember Darryl ahead of his (possible) reappearance for Marvel’s Thor: Love and Thunder.

Thor decided he needed some “me time” and moved to Australia for a bit, where he roomed in a very nice flat with Darryl Jacobson, a man who worked a normal job and would try to clean but couldn’t vacuum around Mjölnir and would send emails for Thor since … well, Thor didn’t bother to learn how to do it. And while he’s just a fun little part of Thor’s overall story, we might still have more Darryl coming our way.

In an interview with executive producer Brad Winderbaum for /Film, he was asked if we’d get another short film about what Thor was doing between Avengers: Endgame and Thor: Love and Thunde:

You mentioned you’re executive producing Thor: Love and Thunder. One of the fun things that came out of Thor: Ragnarok were the short films showing what Thor was up to during the events of Captain America: Civil War. Is there a chance that Taika Waititi has put together another short to create a bridge between the events of Avengers: Endgame and Thor: Love and Thunder?

Are you talking about Darryl?

Are you saying you want more Darryl?

I think everybody wants more Darryl.

Well, maybe you might get more Darryl. It’s possible.

Sadly, their relationship clearly got cut shot when Thor had to go back to Asgard, and then Thor: Ragnarok happened. But at least Darryl and Thor got to bond, and Thor had someone who was there for him when none of the Avengers really wanted his help, even when he was sitting at a table with Bruce Banner and trying to just talk to Tony Stark to see what was up. I’d like to think that Darryl was there to give Thor some ice cream and listen to all his problems with the Avengers and his brother.

But if Darryl does, in fact, come back into the Marvel Cinematic Universe, I hope it’s because Thor needs to room with Darryl for a bit—maybe this time, with Korg.

What we know is that Thor left to go travel with the Guardians, and that’s where we last saw him. Who knows? Maybe they come back to Earth and get stranded and need a place to stay for the night, and Thor says he “knows a guy.” After all, they did film all of Thor: Love and Thunder in Australia, where Darryl lives.

From Matt Damon coming back as Loki and Melissa McCarthy as Hela joining the cast as the fun theatre troupe who would do productions of Thor and Loki’s story for Loki-disguised-as-Odin’s amusement, who actually knows what this movie is going to be.?I hope that Lady Thor (a.k.a. Jane Foster) has to meet Darryl to figure something out, or maybe Darryl seeks them out for help. Whatever it is, I would take an entire movie about Darryl and his day-to-day life and how he ended up somehow living with Thor for a while.