Military Explains DADT In World’s Most Boring Comic Ever 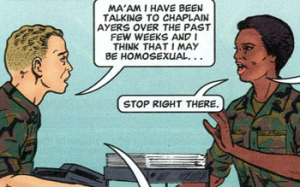 Now that we’re preparing to say goodbye to Don’t Ask, Don’t Tell (or at least we hopefully are), it’s a good time to look back on this controversial policy. And what better way to do that than by reading ahilarious nine-year-old comic book created by the military to explain the rules of neither asking or telling to our soldiers? Give up? I’m not surprised because there is literally no better way.

>>>Read some of the ‘highlights’ at Mediaite.