The Cast Helps Us Break Down the Big Twists in #TheFlash100 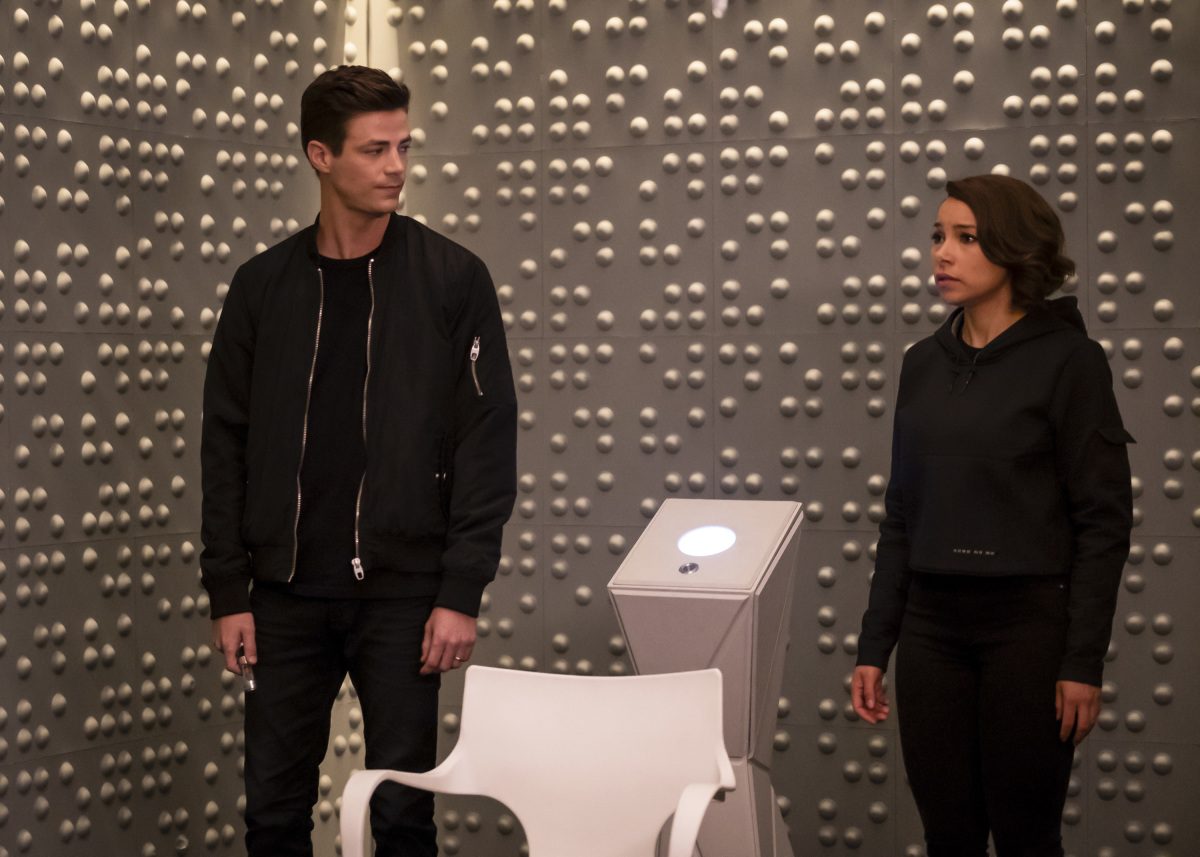 Last night’s one hundredth episode of The Flash, entitled “What’s Past Is Prologue,” was both an emotional walk down memory lane and huge turning point for the show and the season. Team Flash came up with a plan to defeat Cicada (Chris Klein) that involved Barry (Grant Gustin) and daughter Nora (Jessica Parker Kennedy) running to various pivotal points the past—Hi, Zoom! Bye, Zoom!—to put together a weapon to defeat the meta-killing menace.

But, as with literally every plan Barry has ever made, there were a few hiccups that might have massively altered the timeline. Whoops. After a not-so-successful battle with Cicada and a surprising save by Killer Frost, the team retreated back to Star Labs to lick their wounds, and the audience was treated to not one, but two giant twists.

One, Sherloque Wells (Tom Cavanaugh) might not be all he appears—in fact, he might be ultra-villain Eobard Thawn hiding in plain sight again. Two, a (possibly?) different version of Thawn is being held prisoner in the future by Nora. Oh, and there was also that little tag scene with the Monitor killing all the DC heroes aside from John Wesley Ship’s Flash, but that one is going to get addressed in a few days on the Elseworlds crossover. (Here’s everything we know about that.)

For now, let’s run down what the cast and producers had to say about the episode, Nora’s secret, and the return of the Reverse Flash on the red carpet of their 100th episode party.

If there’s one actor we met on the carpet who is one hundred percent nicer than their onscreen counterpart, it’s sweet Texan gentleman Chris Klein, who talked about why Cicada is so different from other members of The Flash’s rogues’ gallery: The loss of his adoptive daughter to meta-linked violence is a kind of valid reason for his anger.

“I think every villain has a reason for their evil,” said Klein. “Cicada’s is just a bit down to earth.” The respiratory-inhibited bad guy has “nothing to lose.” Klein added, “He doesn’t want power … he just wants metas to be gone,” but one meta in particular is going to make that very hard for him: Caitlin Snow (Danielle Panabaker), a.k.a. Killer Frost.

As we finally learned a few weeks ago, Killer Frost wasn’t created by any dark matter, but instead by her own father. Not only does that get Barry off the hook, who previously blamed his Flashpoint shenanigans for her meta-abilities, but it means Killer Frost isn’t vulnerable to Cicada’s dagger. “The reveal is fantastic that Killer Frost is immune to Cicada’s dagger,” Klein said. “It’s really gonna complicate Cicada’s life a lot.”

And those complications might show up a lot sooner than we think, especially with Thawn on the horizon. Unlike previous seasons of The Flash, which showcased a single big bad all season, season five sounds like it will have a different structure, according to showrunner Todd Helbing: “This year, we really tried to do a sort of first-second-third act. So Cicada is the first act; there’s going to be something else that you don’t know about that’s going to happen; then you’ll see how Thawn ties into everything.”

I’m sure it will be stressful, but it will also be entertaining as hell to see the Man in the Yellow Suit back in the mix. Thawn is (perhaps literally, if you were paying close attention) the gum on Barry Allen’s shoe that he just can’t shake. “He is the thorn in his side,” said Helbing. “He is the guy that Barry will never be able to get rid of.” Helbing also shared, “Thawn for me, personally, is my favorite villain, and a lot of that has to do with Tom.”

Tom, of course, being Tom Cavanagh, who not only played five or so different versions of people with his face in the 100th episode, but he also directed it. It turns out Cavanagh, who has helmed two other episodes of The Flash, prefers directing himself.

“The more I’m in it when I direct, the more comfortable it can be … I don’t have to yell at you to do what I want you to do when you’re me,” Cavanagh laughed on the carpet. He has played nearly a dozen different characters since starting the series, but he seems very excited to be slipping back into Thawn’s nefarious skin.

It’s “wonderful,” Cavanagh shared. “You can’t really have a light without a dark. Grant Gustin is so winning as The Flash; he’s such a light. That ethos is helped by sticking it in the dark, and that’s where I come in.” Much like the Joker and Lex Luthor help their heroes shine, “having Reverse Flash … is a good thing for our show.” 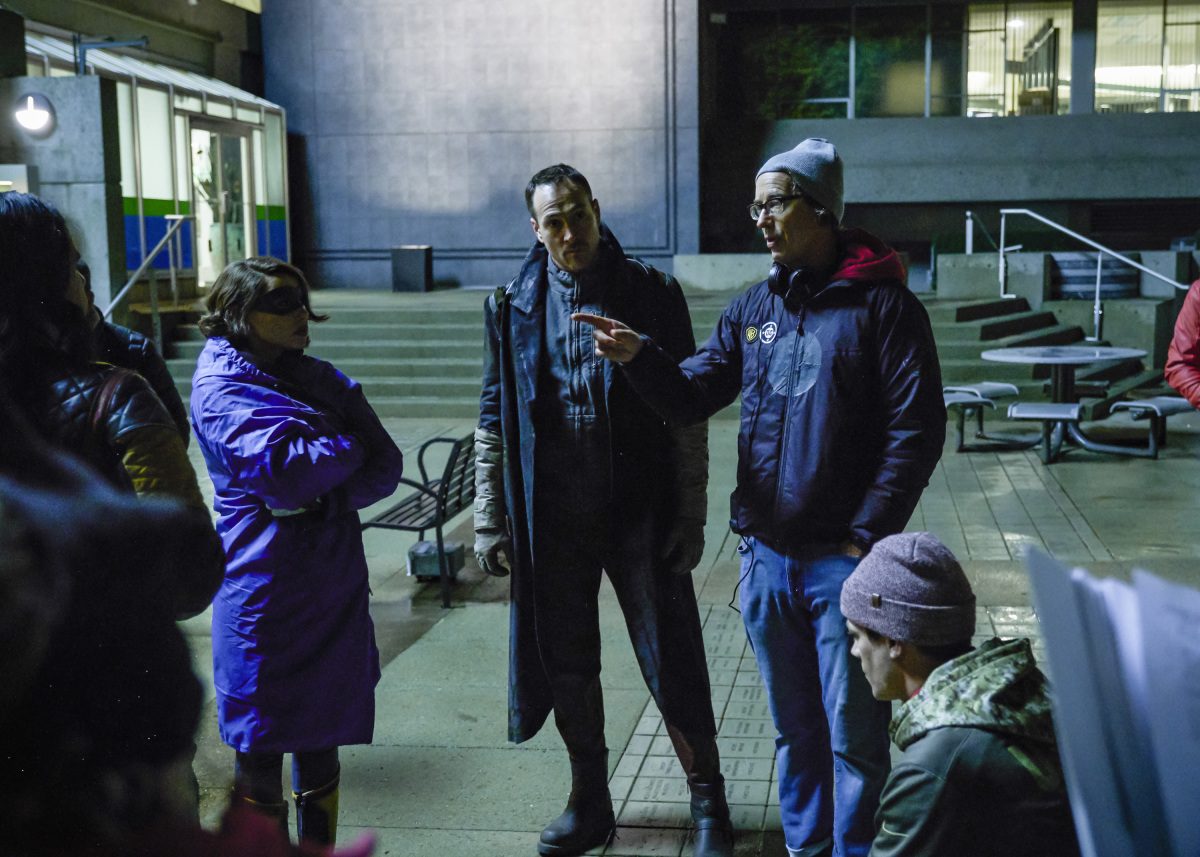 Grant Gustin feels the same way: “I, Grant Gustin, am thrilled that Thawn is back. I’m sure Barry will feel differently.

As Helbing also hinted, it may take a while for them to get to that revelation, because according to Gustin, as of episode eleven, the gang still doesn’t don’t know the secret yet. “I don’t know how that’s going to go down yet, but I can imagine it’s not going to be great,” Gustin said.

And how about the girl behind all the secrets, Nora West-Allen? “It’s kinda like worrisome, right?” said Parker-Kennedy, but “from Nora’s perspective, I think she … always thinks she’s doing the right thing.” That sounds a lot like her father.

When the truth about Sherloque comes out, one person I’m sure will be crowing “I told you so” is his rival detective, Ralph Dibny (Hartley Sawyer). “You’re gonna have to wait and see, but Ralph is never one to shy away from strong opinions,” said Sawyer of his elongated alter-ego’s reaction to the news.

Along with Parker-Kennedy, Sawyer is one of the newer additions to the Flash family but hinted that there’s a lot in store for his character as he continues to evolve from uncouth jerk into a real hero (including introducing his love from the comics, Sue). “He’s found his family. He’s part of the team …and I think having that support system really allows him to come into his own,” Sawyer shared. “Now he can blossom.”

Sawyer himself expressed deep gratitude to be part of such a beloved show and to join in the 100th episode and the celebration. “I’m extremely lucky to be here,” Sawyer mused. “I haven’t been here from the beginning, but I wish that I had been now, more than anything. But I love that I’m here now. Honestly, it’s a privilege and an honor … there’s not much more that I can ask for.”