Things We Saw Today: A Pallbearer at Elijah Cummings’ Funeral Snubbed Mitch McConnell and It Was Exceptional 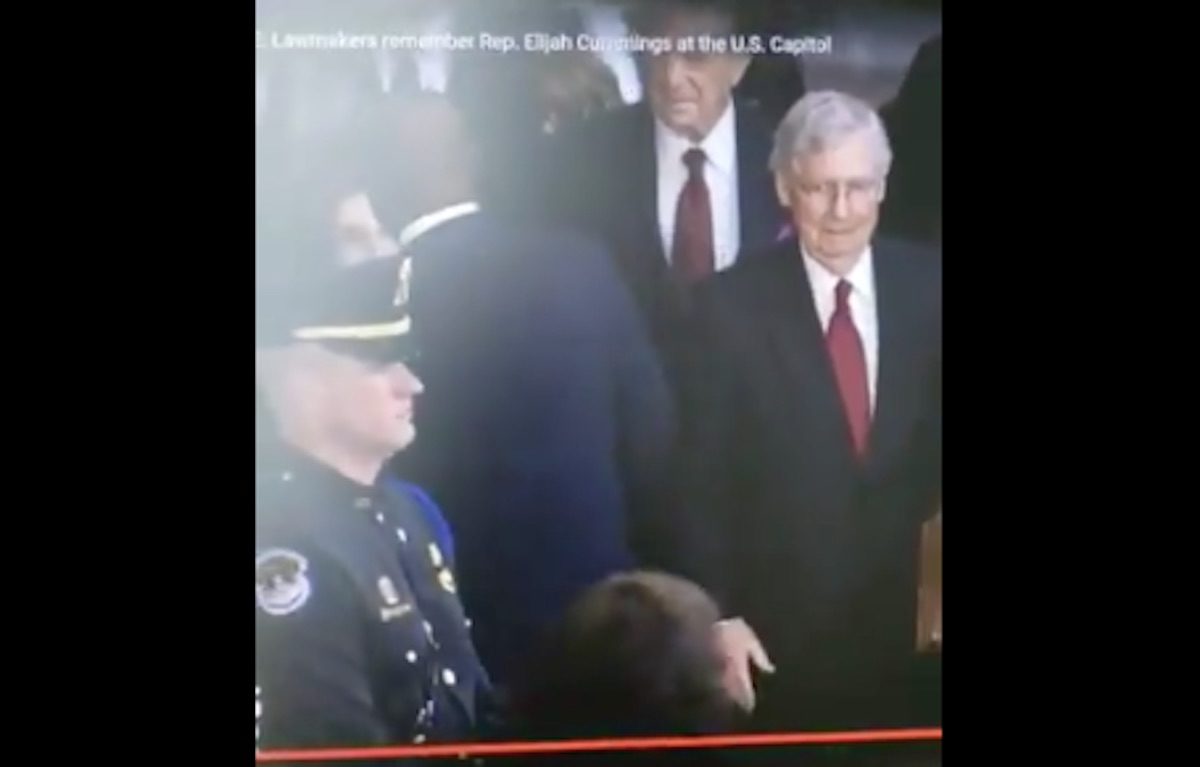 A true American hero emerged today at Elijah Cummings’ funeral. One of his pallbearers, going down the line of distinguished statespeople and shaking their hands, passed right by “Moscow Mitch” McConnell.

The look between McConnell and Schumer when the brother doesn’t shake Mitch’s hand 💀💀💀👀 pic.twitter.com/UbRXLhtW36

A clip of the moment, which fast vent viral, has since been viewed more than 2 million times on Twitter. After the man moves past McConnell without a handshake, McConnell turns to Senate Minority Leader Chuck Schumer in apparent surprise.

I would like to buy this pallbearer a bottle of wine and give him a trophy. This is what the kids would term a 2019 mood.

Senate Majority Leader Mitch McConnell is often said to resemble a turtle but I will not disparage turtles in such a fashion. His very real, horrific actions go far beyond reptilian resemblance. The damage McConnell does to America on a daily basis by allowing for Donald Trump’s crimes, and refusing to pass bills like the bipartisan election security bill, among others, is incalculable. McConnell should never know peace.

The man who did not shake McConnell’s hand is reported to be Bobby Rankin, who is listed as a pallbearer for Cummings’ funeral on Friday, October 25.

The incident occurred during the service for the late Oversight Committee chairman, who became the first black lawmaker to lie in state at the Capitol.

Elijah Cummings, the widely respected Baltimore Democrat and powerful House Oversight Committee chairman, was a frequent target for Donald Trump—Cummings had always boldly pushed back against the President’s corruption and outlandish behavior. He was so dedicated that he was still signing subpoenas on his deathbed that concerned Trump’s attempt to bar severely ill immigrants from seeking treatment in the United States.

Mitch McConnell is not only single-handedly holding back bipartisan bills that are gathering dust on his desk, but continues to legitimize Trump’s cruel (and often illegal) actions. If the Senate derails Trump’s ultimate impeachment, it will be because of Mitch McConnell. He’s also the reason why we have Neil Gorsuch on the Supreme Court instead of Merrick Garland, after McConnell hijacked President Obama’s rightful appointment.

Bless the hero who was able to convey the utter contempt so many of us have for Mitch McConnell with the mere act of not shaking his hand. He didn’t need to call out McConnell or say anything. An elegant and effective protest. He simply passed right by McConnell as though he did not matter, and it was beautiful to see.

History will one day skewer Mitch McConnell. May that day come quickly—and in the interim, let him continue to suffer the public repercussions of his indefensible choices.

“This was a man of the utmost integrity. Do you hear me? He had integrity! And he cared about our democracy!” https://t.co/EcNqCrt8Nz pic.twitter.com/Ov9bei3qCe

We would die for Cinderblock.

U ARE DOING GREAT CINDERBLOCK https://t.co/7JIM1F6vJ5