And The Flash too! 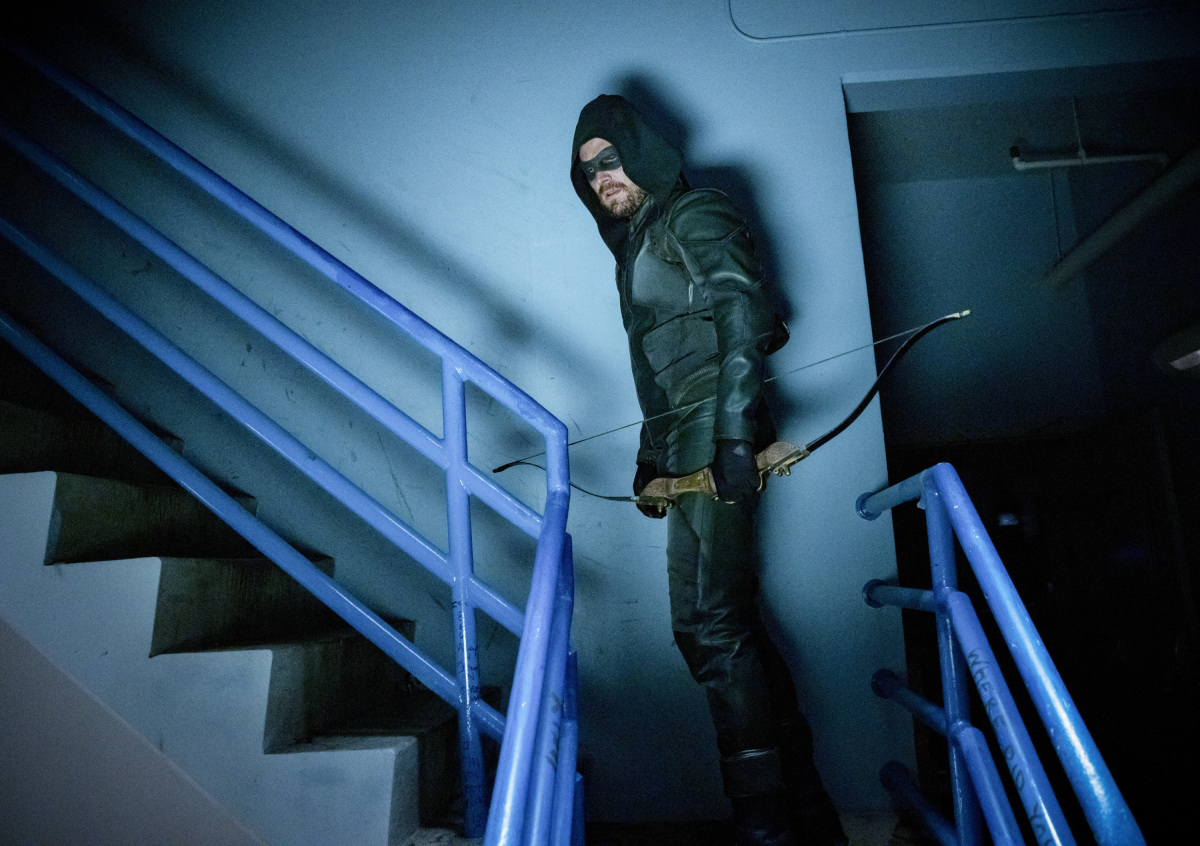 Warning: This post contains major spoilers for last night’s episodes of Arrow as well as The Flash.

Wow, guys. We knew going in that the final season of Arrow was going to be emotional, but the season eight premiere pulled absolutely no punches, as it brought back beloved faces from the past and then ripped them away in a manner that would make Infinity War proud. Yes, after connecting with the Earth two versions of his dead mother and dead best friend, Oliver had to watch as all of them were vaporized in a red, anti-matter wave as the entirety of Earth 2 was destroyed before his eyes.

Earth-2 has a long history in the Arrowverse. It was first introduced over on The Flash back in their season 2 as a sort of mirror universe of Earth-1. It’s the home universe of Hunter Zoloman (aka Zoom), Harry Wells and Jesse Quick. And I guess Harry and Jesse are dead now which is … a bummer. Along with Barry Allen’s visit to Kara Danvers Earth 38, Earth-2 was the Arrowverse’s first introduction to the multiverse, something that’s become an integral component of the shared universe of series. There are, theoretically, well, Infinite Earths. And so it’s actually pretty poetic that Earth-2 is the first alternate world that we see destroyed. The only remaining earth-2 resident now is Laurel Lance aka Black Siren. 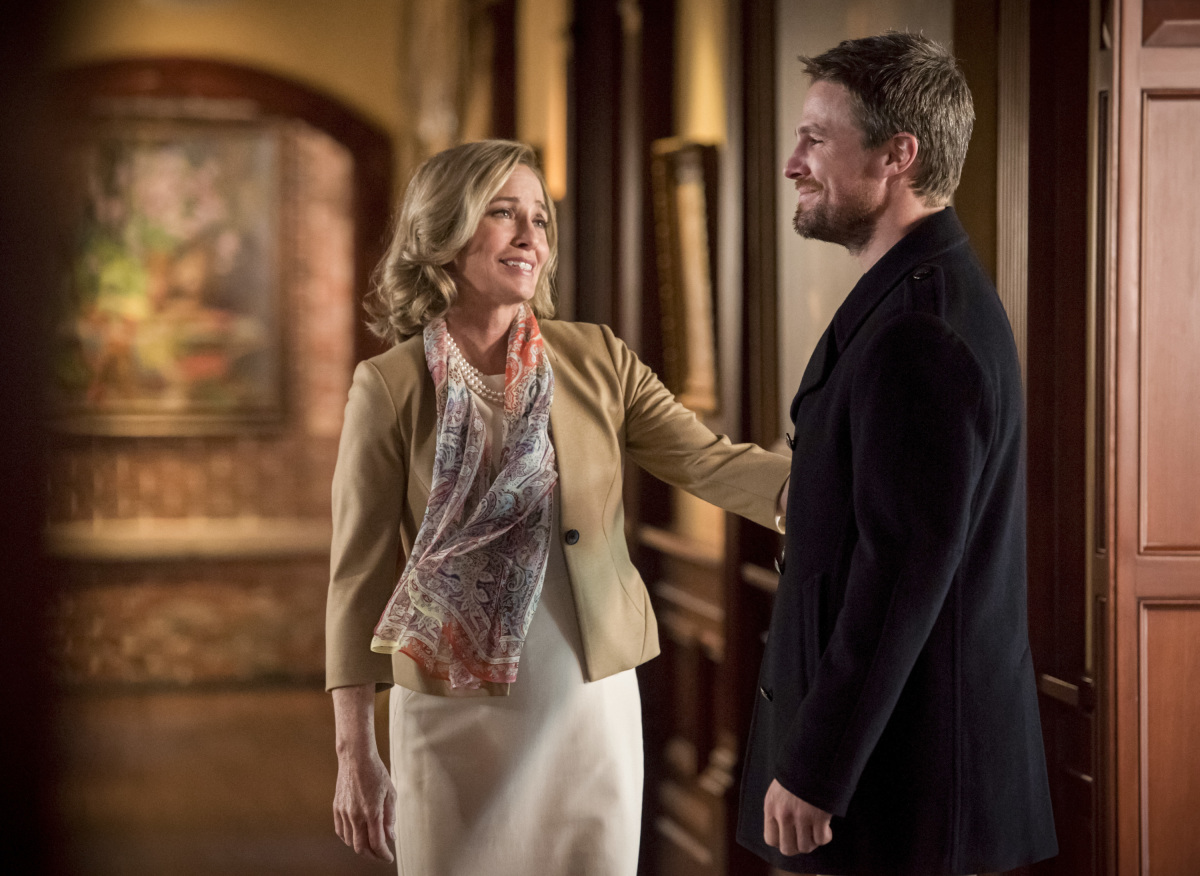 But let’s talk first about what happened before the shocking destruction of an entire realm of the multi-verse. The season eight premiere started with a pretty brilliant recreation of the first-ever episode of the series, with a rugged Oliver Queen rushing through the jungles of Lian Yu to signal a fishing boat to get rescued.

It was a great callback to the start of the series but we knew from the get-go things were different. Instead of seeing Deathstroke’s mask on the beach, we saw Batman’s (!) so we knew something was up. The big blows came however when Oliver was met in the hospital by his mother, Moira (Susanna Thompson), who was killed in season two of the series. The second emotional punch came when Oliver reunited with Tommy Merlyn (Colin Donnell), his best friend who died at the end of season one, and who in this reality was his step-brother … and also a villainous Dark Archer.

I’ve got to say, the trip to Earth-2 was a brilliant twist. It was gut-wrenching to see Oliver interact with versions of the people he loved so much and has lost, as well as a way to bring in old favorites for long-time fans of the show. It was a re-do of the pilot in a lot of ways, with many little callbacks—including Oliver trying to ditch Diggle and getting thwarted, because this Digg was actually from Earth-1 and had popped over to smack some sense into Ollie.

The journey to Earth-2 – which Oliver took on at the behest of the Monitor (LaMonica Garrett) – was about getting some specific particles from Earth-2, but it also was a sort of It’s a Wonderful Life journey for Oliver, who got to see what a difference he made, for better and for worse, in his own world. And it allowed him to be a hero in a different way that fighting – by inspiring Tommy to put down his bow and let go of his quest for revenge. Oliver got to make some peace with the people he lost…and then to see them evaporate before his eyes? Ouch. 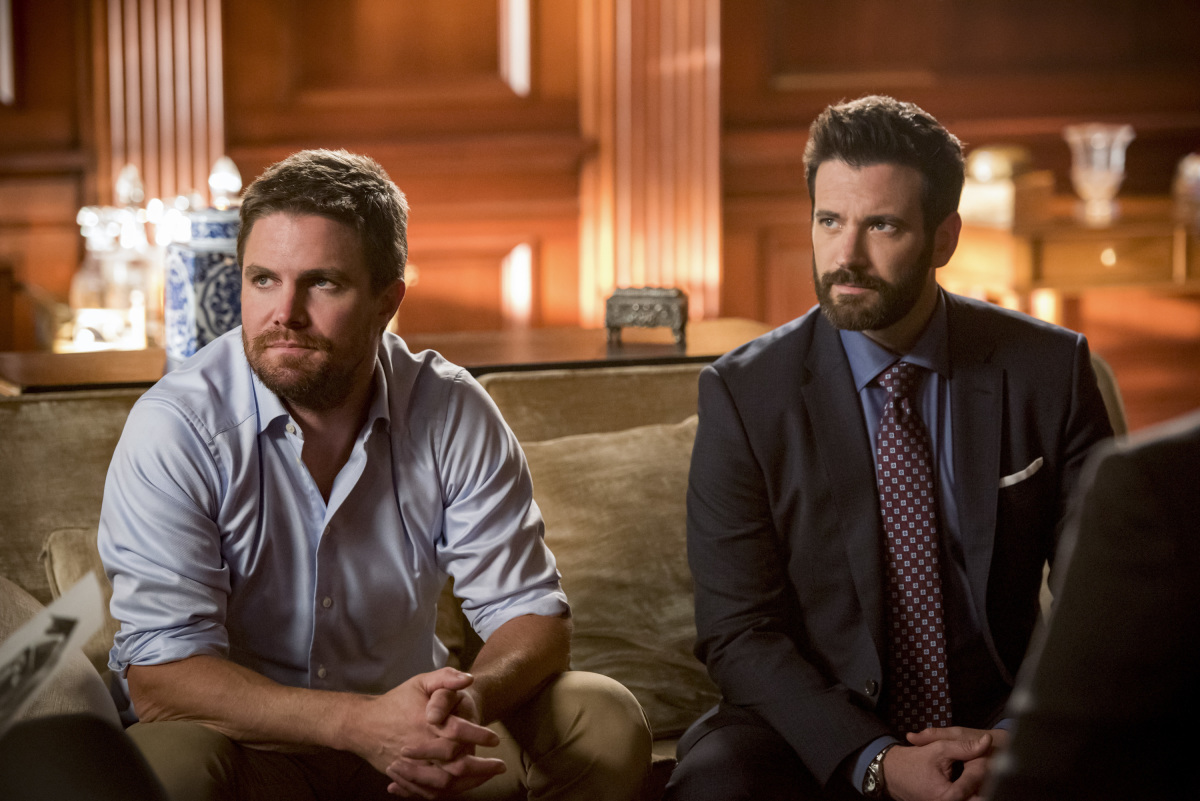 The visit was also a great contrast to what happened this week over on The Flash as well. Barry traveled to Earth-3 to visit Jay Garrick, to doppelganger of Barry’s dad, who happened to be dating a woman who looked exactly like Barry’s mother. I was pleasantly surprised that Earth-3 didn’t get roasted as well (at least this episode). But seeing Oliver Queen and Barry Allen get to hug their almost-moms and say thank you and goodbye on the same night? My heart was no ready.

Nor was I ready for Barry’s vision of the future. In another Infinity War-esque moment, Barry Allen saw billions of possible futures, including seeing his friends and loved ones, including Iris, be destroyed by the red anti-matter wave. Unlike Doctor Strange somewhat dispassionately telling Tony Stark that this was the only way, we were treated to a tearful Barry confessing to his wife he had to die to save billions. And when Barry Allen cries, I cry.

Both these episodes are huge for setting up the rest of the seasons, the lead up to Crisis on Infinite Earth, and the emotional core of that story built around Barry and Oliver. We’re watching a connected narrative between all these shows in a way that’s never been done on television before and it’s really quite amazing. I have no idea where it’s going next, but I’m sure there’s more emotion and destroyed planets to come before we make it out on the other side.