Watch, as it stubbornly blends into its surroundings. 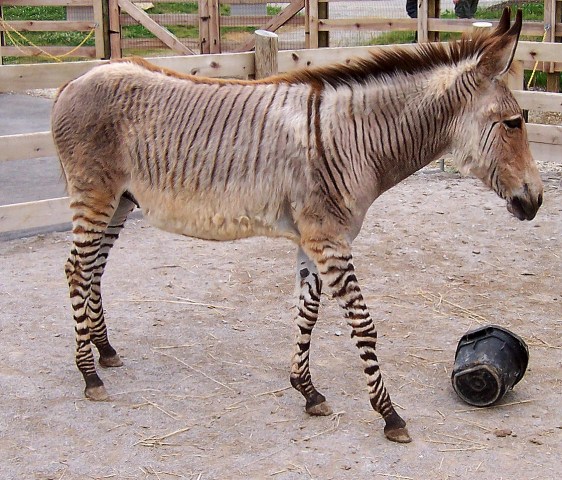 A Crimean zoo has a new addition after the recent birth of a zonkey named Telegraph. Telegraph is a cross between its zebra mother and donkey father. The zonkey is already a popular attraction at the zoo, but not everyone’s happy about it.

Some critics say cross-breeding animals like this is not the purpose of a zoo. Anna Kachurovskaya of the Moscow Zoo calls the practice unjustified and unscientific, adding that it’s not something that happens at “civilized zoos.” Kachurovshaya says one of the primary purposes of a zoo is to preserve wild species.

But Oleg Zubkov of the private and apparently uncivilized Crimean zoo where Telegraph was born said the breeding occurred as a result of Telegraph’s parents’ “affection for one another.” Telegraph’s mother, a zebra, was unhappy in her own enclosure according to Zubkov, so at the advice of other zoologists, they moved her into an enclosure with other hooved animals. Zubkov says she took a liking to the donkey. Next thing you know, boom, baby zonkey.

Zonkey’s aren’t unheard of, and cross-breeding similar horse-type animals happens, but it does raise an ethical question of the zoos where such breeding takes place. Should zoos be producing zonkeys? What about zeagles? Zebears? Zengaroos?