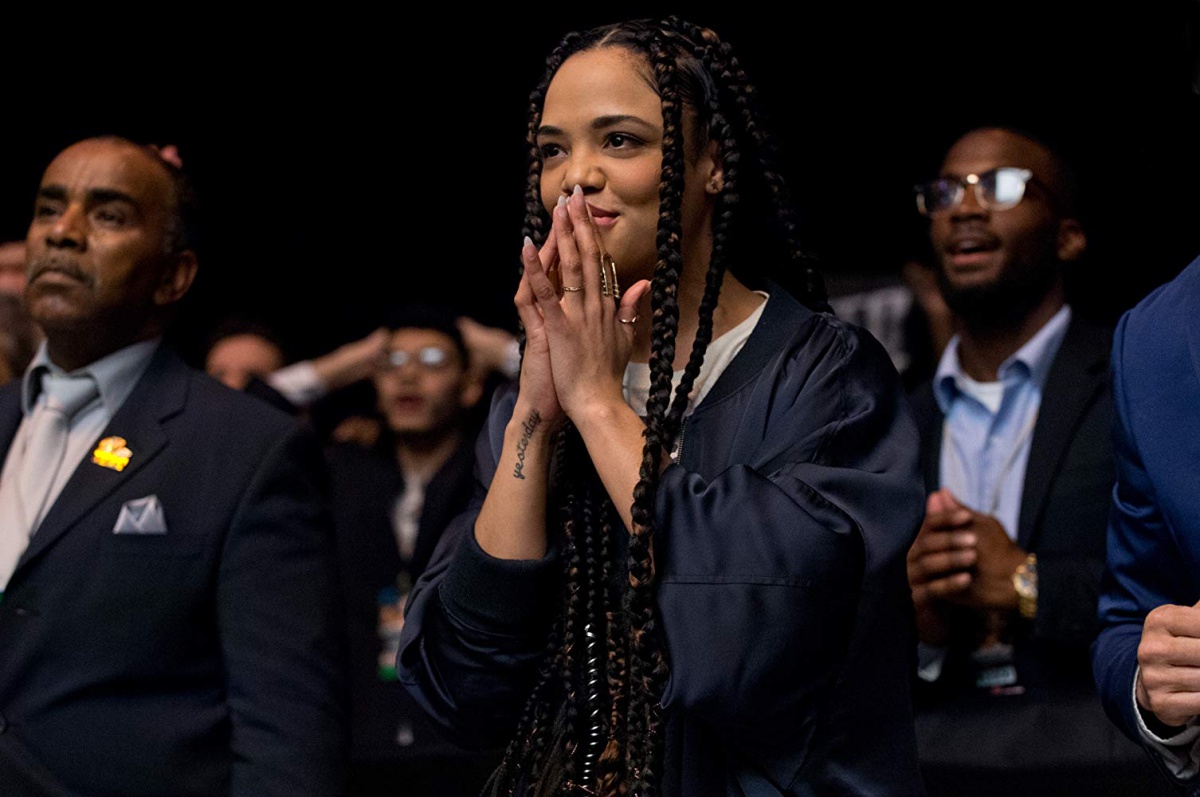 Creed II, along with the entire Creed spinoff, has managed to be an incredible revival of a beloved franchise, a black movie that is proud of its blackness, and also a good romance.

Creed II continues this as a really solid sequel despite director Ryan Coogler and writer Aaron Covington not returning to the franchise. I greatly enjoyed it, and it gave me a new thirst trap in boxer Florian Munteanu as Viktor Drago. Still, that doesn’t mean that there isn’t one element of the film I wish could be more defined, and that is the role of Bianca Taylor, as played by Tessa Thompson.

When we meet Bianca in the first movie, she’s an aspiring musician with progressive hearing loss who becomes the love interest for Adonis. She’s a supportive partner and a really good friend to Adonis. Their chemistry is natural, and even in Creed II, when Bianca uses sign language to make jokes with Adonis or they just lie together, it feels like they have a lived-in relationship, even though we’ve skipped a lot of time watching them grow.

That being said, as we go deeper into the blood-feud match between Adonis and Viktor, the movie really becomes all about the daddy issues that these two men have developed due to their interwoven legacies. It’s an interesting story, but it also pushes the needs and desires of Bianca, Adonis’ wife and the mother of his child, and Mary Anne Creed, his mother and Apollo Creed’s widow, to the side.

As Candice Frederick writes in her review for Cosmopolitan, “It’s clear that [Adonis’] relationships with men are a greater motivator for him than both Bianca and Mary Anne, who are given no choice but to honor his commitment.”

When Adonis tells his mother that he’s going to take the match, he talks about how he needs to avenge his father and brings up that the fight left her a widow. Mary Anne makes it very clear that she’s not going to cosign Adonis’ actions on the idea that he’s some sort of avenger. This is about him.

But after that point, Mary Anne sort of fades off into the distance as a character expect to be supportive as needed. That’s interesting to me because Mary Anne is also a Creed. She was there, and just like Rocky, she knows very much what Apollo died for.

There’s a great scene when Adonis is recovering from the ass-whupping he got from Viktor and becomes emotionally distant from Bianca, and she goes to Mary Anne to talk about how to deal with this. Mary Anne says she has to be there for him, but also realize that he needs to heal himself.

It was reassuring to hear Mary Anne tell Bianca to make space for her own needs during this process, but it also reminded me that she doesn’t have an onscreen support system aside from her ties to Adonis. She has totally faded into his world and his legacy.

It doesn’t mean that they aren’t supportive of each other. The issue is that, from a narrative standpoint, Bianca has no people. She’s like Thumbelina, just born as this fully formed beautiful woman who is the perfect person for Adonis. She mentions her mother once, but when she’s giving birth, no one is there with her from her side of the family—not even a cameo—and that strikes me as significant because it makes her seem like just an extension of Adonis’ needs, rather than her own person.

After two movies and a possible third, I know that I really like Bianca as a concept, but she still doesn’t feel like a fully fleshed out person because there isn’t enough time spent to give her that extra personhood. We so rarely have depictions of black women with disabilities in the media not being treated like a joke or desexualized, and Bianca is so driven to succeed because she doesn’t have a lot of time left, but she’s always so mellow that you never feel like she’s hustling as hard as she clearly must be to have a record deal.

Why no quiet moment to show Mary Anne mourning her own husband and talking about what they lost together in a movie that is all about that loss? Especially considering that she has her own biological children with Creed, as well. Even considering the scene where Rocky and Adonis are talking about Amara Creed’s potential hereditary hearing loss, where is that conversation with Mary Anne or Bianca?

These are minor complaints about a movie I deeply enjoyed, but I think as we congratulate Creed on all the things it does right, it’s fine to address something that could make it stronger.