Giant Touchscreen Tablet Could Be Used By Military Commanders 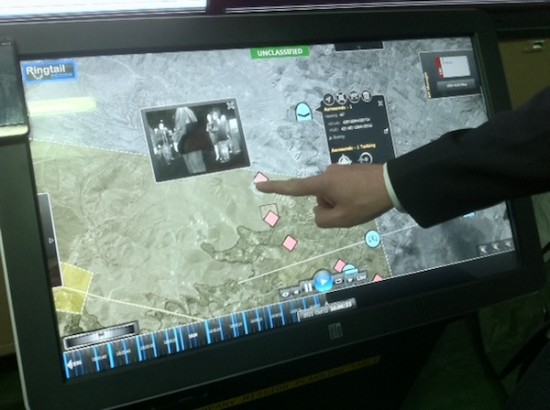 In an attempt to replace the stereotypical map-table with figurines and one of those little, miniature push-broom thingies, the company AAI has developed a giant touchscreen tablet that could allow commanders to give orders to troops on the ground the same way you pick the angle at which you want to launch your bomb bird.

The tablet is two feet by three feet and uses collected surveillance information to show a map of the war-zone that is as accurate and up to date as possible, including simple stuff like terrain and structures, but also the location of friendly and enemy troops. The enemy troops part won’t always be perfect, of course; the tablet does not allow you to disable the fog of war function.

Obviously, since this isn’t a computer game, the battlefield assets aren’t being directly controlled by the commander’s finger, but upon arrangement, orders would be sent out to the appropriate personel whether they are soldiers, tank operators, or pilots in charge of drones. Upon recipt of the orders, the units would apparently confirm by instant message before moving, sort of like playing Command and Conquer on a really laggy computer.

Now this tablet isn’t in use yet, and there’s no telling if it ever actually will be. AAI is in the process of trying to sell the system to the Army who have, in the past, been wary about the security of wireless communications. Nonetheless, Marine top brass recently launched a program to get iPads into the field, so this wouldn’t be much of a stretch. If this does become the norm, it’d be interesting to see what kind of simulations this might lead to. It seems like the RTS genre might start bumping up against realistic simulations pretty fast. I wonder if there’s a real-life military equivalent to the six pool rush…