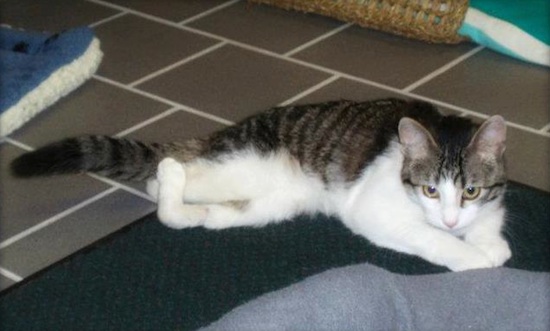 This is Corky, a seven-month old cat with crisscrossed, backwards legs — a condition called Bilateral Arthrogryposis. Found in Fargo, North Dakota, the stray feline was due to be put down due to the severity of his condition. However, Gail Ventzke and Carol Stefonek with the CATS Cradle shelter stepped in with a bold plan to save the cat with a radical surgery. Now, after two weeks of recovery, the cat is up and about and trying out his right-round legs for the first time.

To give you an idea of the severity of Corky’s condition, here’s a before and after X-Ray from CATS Cradle. 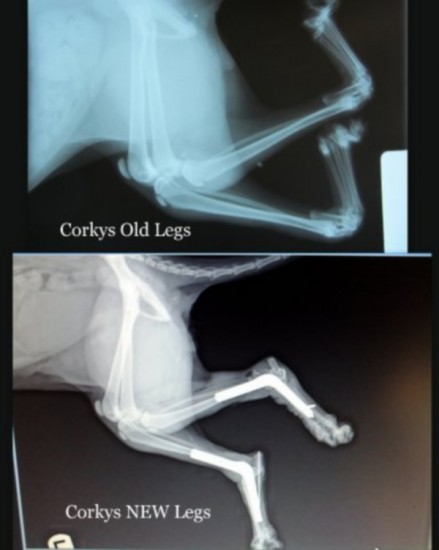 Getting Corky’s legs flipped around was no simple feat. The surgery was carried out on April 5 by Dr. Dan Burchill, who used a technique employed to solve a similar problem with dogs. It took five hours of surgery to not only turn Corky’s legs, but reinforce them with steel pins. Burchill also had to cut Corky’s achilles tendon, in order for the cat’s toes to unclench and spread apart.

Though his limbs are all sorted out, Corky still has a hard road ahead of him. He’s been doing hydrotherapy, physical therapy, and other recuperative exercises to get him back on his feet. Despite having never walked normally before, Corky seems to be taking to his new legs pretty well, but it will surely be some time before he’s fully confident walking. That said, he seems to be enjoying some newfound freedom.

Corky’s story has already been picked up by several news outlets, inspiring people the world over to donate money for the cat’s recovery. If you’re keen to keep up on Corky’s story, you can get the latest news from the CATS Cradle Facebook page.