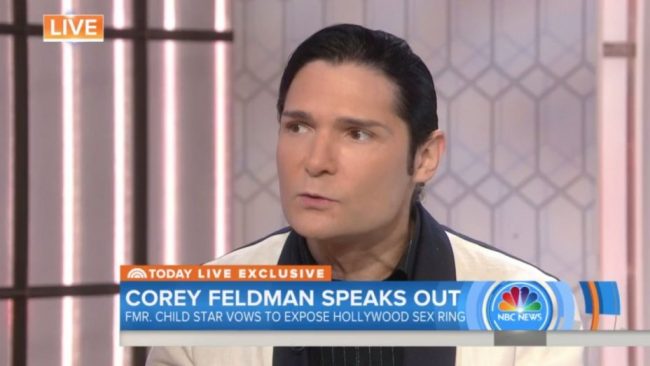 Corey Feldman has been outspoken about the prevalence of sexual harassment and assault within Hollywood for years, detailing the abuse that he and his late friend Corey Haim suffered at the hands of pedophiles within the industry. It’s an upsetting and devastating fact that Feldman has never gotten justice, and instead has been met with efforts to silence him.

With the news about Weinstein and countless other figures abusing their power coming to light, more and more survivors are coming forward with the stories. We’ve seen many survivors cite the women who came forth about Weinstein as inspirations, and actual consequences result from their bravery. However, the culture of silence and shame is not easy to dismantle overnight. Feldman, in an interview with NBC’s Today spoke about a fundraising campaign for a movie he called “most honest and true depiction of child abuse” and explained why he still is not naming names.

It’s been incredibly frustrating to see survivors talk about their experiences with harassment and abuse on Twitter or other platforms, and then to see responses like “name them or you’re complicit” without any consideration of that individual’s circumstances. Certainly, we should hold people like Quentin Tarantino who admits he could have done more, but there are plenty of victims who don’t name their abusers because they don’t want to deal with the scrutiny, threats, and even retaliation that often accompanies these brave acts. His statement is a sobering reminder that plenty of survivors might not have the protections they require to name their abusers:

“I need a team of lawyers and I need a team of security to be around me at all time to keep me safe so I can get this message done…I vow that I will release every single name that I have knowledge of, period. And nobody’s going to stop this.”

Feldman also states that he had gone to the police previously, specifically in 1993 to the Santa Barabara police department before being told that the list of people he “believed to be pedophiles” “wasn’t its jurisdiction.” He also says:

“There are thousands of people in Hollywood who have this same information. Why is it all on me? Why is it if I don’t release the names in the next two months, six months or a year, I’m a bad guy? I’m a victim here. I’m the one who’s been abused. I’m the one who’s trying to come forward and do something about it. There are thousands of people out there who have this information, Matt. Any one of those child actors who went to the teenage soda pop clubs with me when I was a kid know who those people are and who ran it.”

Feldman’s story shows that not only do we need to listen to survivors and believe them when they come forward with their abuse, we need support how each person defines and handles their own trauma.