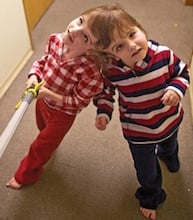 A pair of conjoined twins named Tatiana and Krista Hogan, who were born four years ago in Vancouver, partially share brains: There’s a bridge between each girl’s thalamus, which could allow them to share sensory information and more.

One scientist who conducted tests on them concluded that “Their brains are recording signals from the other twin’s visual field … one might be seeing what the other one is seeing.”

Their grandmother is convinced that they can even share thoughts:

Adding to the conundrum, of course, are their linked brains, and the mysterious hints of what passes between them. The family regularly sees evidence of it. The way their heads are joined, they have markedly different fields of view. One child will look at a toy or a cup. The other can reach across and grab it, even though her own eyes couldn’t possibly see its location. “They share thoughts, too,” says Louise. “Nobody will be saying anything,” adds Simms, “and Tati will just pipe up and say, ‘Stop that!’ And she’ll smack her sister.” While their verbal development is delayed, it continues to get better. Their sentences are two or three words at most so far, and their enunciation is at first difficult to understand. Both the family, and researchers, anxiously await the children’s explanation for what they are experiencing.

Full fascinating profile on the Hogan twins and the implications their case has for neuroscience at Macleans.ca.

(Macleans.ca via Kottke via Boing Boing. pic via Macleans.ca)