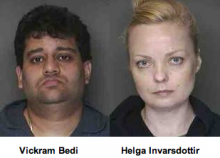 “Over time, prosecutors said, Mr. Bedi told Mr. Davidson about an elaborate international conspiracy that had attacked Mr. Davidson’s computer and was threatening Mr. Davidson and his family. The conspiracy allegedly involved a mysterious hard drive in a remote village of Honduras and a plot to infiltrate the United States government by Polish priests linked to Opus Dei. Mr. Bedi persuaded Mr. Davidson to pay the computer shop not only for data retrieval, but for personal protection, the authorities said.

It was, of course, a fraud, officials said. For more than six years, the computer shop, Datalink Computer Products, regularly charged Mr. Davidson’s credit card accounts. The charges totaled more than $6 million, according to the office of the Westchester County district attorney, Janet DiFiore.”

–After composer and oil heir Roger C. Davidson took his computer in to a repair shop six years ago due to virus troubles, employees Vikram Bedi and Helga Invarsdottir allegedly scammed him for millions. And you thought those fake antivirus ads were bad.