Completely Unnecessary Technology of the Day: A Box That Blinks at You 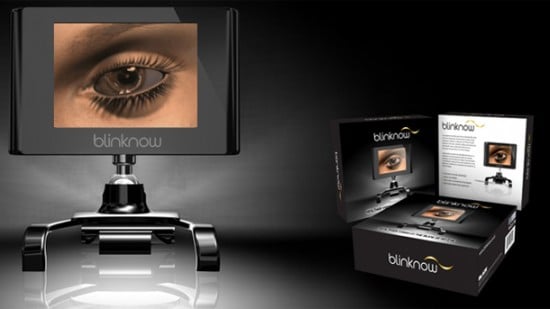 Eye strain remains relevant to many in our increasingly technological society.  How many of us now stare at screens for the majority of the day?  Well, actually, Geekosystem doesn’t stare at screens.

We hang suspended in a clear nutritive ichor that facilitates the machine-transmission of raw kilobytes directly into our visual cortexes; waking from our android-dreams only to tap out the occasional post on keyboards that are laser projected onto the liquid at the tips of our fingers.

But surely there are others who still navigate the internet with their 2-dimensional ansibles, and they may be blinking less often than they normally would.

Clearly, the solution is a box that blinks at you.

Fortunately, Blink Now has created one of those.  Research states that when the eyes are focused on an object for a long time, a person’s blink rate slows down by around 50%.  Blink Now attributes eye strain to this lack of blinking, and their solution is, literally, a box that blinks at you.  Over and over again.

I guess technically it’s winking at you, since there’s only one eye.

This would all be neither here nor there, except for two things, the first of which is that, according to GameInformer, it costs $47.  And that’s when it is on sale. The full price is nearly $80.

For a box that blinks at you every six seconds.

Which brings us to the second thing about this: why does it have to be a box?  You are already sitting in front of a screen.  Why are you buying another screen?  Blink Now could just sell a little piece of software.  This could be an app.  An app that costs a dollar.

Also: you are now aware of how often you are blinking.