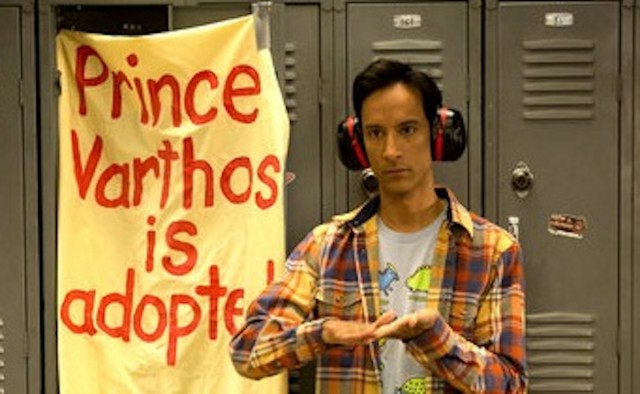 This week was Community‘s first post-Troy episode, and it was a good one. They soothed the loss with a bit of John Oliver, which I always appreciate, and there was a surprise reappearance (if you avoided spoilers) of a past character. Speaking of which, this episode was kind of about spoilers, so here’s what happened—now with 100% more GIFs!

The “Save Greendale Committee,” which you’ll remember from “Repilot,” is finally getting to work on a long list of school improvement projects. Of course, Abed quickly connects their current situation to a TV show called Bloodlines of Conquest (Game of Thrones), and for once everyone else is already super into the show he’s talking about.

They get the incest just right.

Britta quickly plays killjoy and tries to force everyone to live in a fantasy world where dragons don’t exist, because she’s three seasons behind and doesn’t want any spoilers. Abed then drops some additional spoilers on her, and their plot line for the episode is set up when Britta tells him she’s going to teach him a lesson by reading all of the books and spoiling the show for him.

That’s something an insane person would do.

So, Annie partners the two up to complete the student census, so they can hash out their differences, and assigns everyone else a task that needs to get done. For every task they complete, a star goes on the task wall!

Britta, being an insane person, because she’s on this show, actually does read ahead in the books and attempt to spoil them for Abed, but he wears a giant set of earmuffs for the rest of the episode, so he can’t hear anything she says. He also runs into a girl named Carol, who is deaf, in the course of completing the census, and they hit it off, which is nice for Abed. He even tries his hand at sign language, though she can read lips. Turns out, he’s great at it.

Hopefully, he doesn’t have “another intense burst of compatibility with a girl we never see again.”

Annie is displeased with Hickey’s inability to get a bulletin board hung back up by the janitorial staff, so she leaves planning a school dance to everyone else and teams up with him. She winds up working her way through the school’s bureaucracy doing a favor for each department to get what she wants out of another one. (By the way, did anyone else watch Parks and Rec and notice the similarity here?)

Hickey pretty much bets her she can’t get it done, which Annie accepts despite his continued misunderstanding of fist bumps.

Probably everyone in the universe made this GIF today.

Abed continues to avoid Britta’s attempts to spoil his show, and he’s interested in Carol, which he demonstrates by learning how to say this in sign language:

Meanwhile, Chang convinces the team working on the school dance to make it bear and birthday themed with the slogan “Bear Down for Midterms,” which he accomplishes by weeping uncontrollably when they tell him it doesn’t make sense.

Annie winds up in the Dean’s office, and she, corrupted by the system, is trying to get the Dean to appoint the head of parking to oversee bulletin boards so he can get rid of ride sharing, because Annie has created a long labyrinth of favors without any David Bowie. Hickey ruins the whole thing, because he won’t say, “Easy peasy lemon squeezy,” for the Dean.

He lays everything on the table and tells Annie pretty much that he thought better of her than to tarnish the impartiality of bulletin boards, because this show is bonkers and amazing.

The dance organizers find out that Chang accidentally (maybe) chose a dance theme that he didn’t realize he’d gotten from a horrible news story that morning about a bear mauling a child’s birthday party. So, they change the theme to “fat dog” and try to make that a thing, which isn’t quite streets ahead, but I’ll take it.

At the dance, it turns out that Carol became involved in a long-game play by Britta to get Abed interested in her so he would learn sign language, and then she could spoil Bloodlines of Conquest for him despite his earmuffs, which she does.

When he leaves the dance brokenhearted, Abed runs into Rachel, the coat check girl who he really hit it off with last season and somehow never showed up again (damn you, gas leak year), and finally asks her out. Hopefully, this will be a new relationship for Abed now that he’s missing Troy.

Hickey puts a bulletin board up for Annie himself to redeem the whole situation, and after she fights off the Dean’s goons who don’t appreciate him taking matters into his own hands, everyone feels a lot better.

Then everyone learns the fat dog, because it’s not made up.