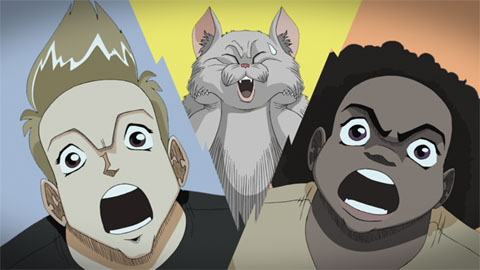 And once again, NBC‘s most neglected show Community is going above and beyond the realm of deep awesomeness and is set to feature an anime sequence in tonight’s episode. I can barely even stand how exciting this sounds, but even more than that, I am just so deeply heartwarmed that this show and its showrunner Dan Harmon clearly don’t bow to the lowest common denominator and basically do whatever they think will be cool, funny, and unique. And as a result, the show grows a passionate fan base while simultaneously confounding NBC executives who don’t seem to know what to do with this glorious, glorious show. I’m sorry, what was I saying? Oh, right! The anime sequence! More about that after the jump!

While we only have basic plot information on this episode, entitled “Foosball and Nocturnal Vigilantism,” there isn’t anything really about how an ’80s-style anime sequence (like Voltron and Robotech) will tie in to the story. But here is that basic plot info:

Jeff and Shirley bond over foosball; after breaking Abed’s limited edition “Dark Knight” DVD, Annie claims that someone broke into the apartment and stole it.

By looking at the pictures, it’s definitely Jeff (Joel McHale) and Shirley (Yvette Nicole Brown) getting the anime treatment. And that means that this is going to be one insanely badass game of foosball. I mean, there’s a cat. A screaming cat. We don’t know why it’s there. Maybe Jeff and Shirley don’t even know why it’s there. But it’s gonna be crazy. Here are two more pictures from Cartoon Brew: 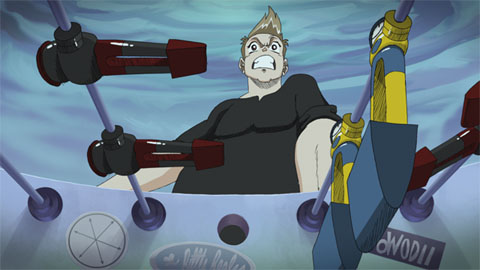 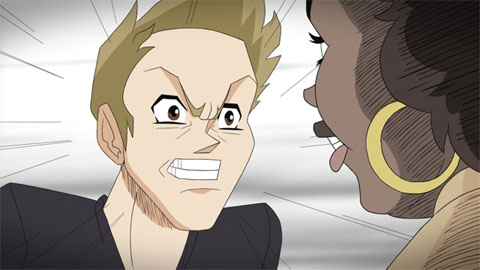 The company behind the animation is none other than Titmouse Inc., who are responsible for several shows on Adult Swim, including the upcoming season of The Venture Bros. and Metalocapypse. The sequence was directed by Grif Kimmins, animated by Parker Simmons, and produced by Ben Kalina.

If you want to see this before it hits the web — and also in context, and also in order to be one of those viewers who really wants to support Community by actually watching it when it’s on the teevee — the episode airs at 8:00 PM on NBC. It’s the second-to-last episode before it disappears from the NBC mid-season schedule, and a really nice early present for the show would be some big ratings numbers!