In a related story, we have always been at war with Oceania. 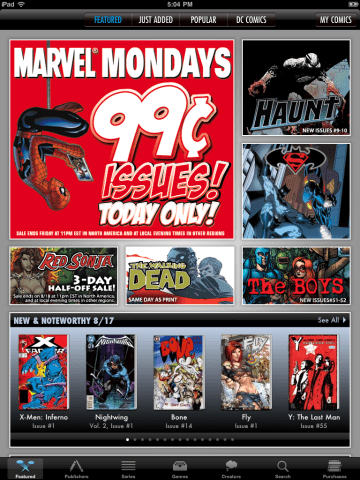 Not more than a month after comiXology faced criticism for preemptively removing a installment of the critically acclaimed series Saga from their iOS app to comply with Apple App Store policies, they’ve now rejected 56 other titles, including a few that were revisited and approved last month. To put it lightly, this bums us out real bad.

After it was reported that it was comiXology, not Apple, who made the decision to preemptively remove Saga #12 from the App Store due to its sexual content, the Internet made its displeasure very clear. The heads of comiXology changed their minds, Saga went back up, and while we were all pretty skeeved out that it was so easy to censor the content from the App Store, we thought the matter was pretty much settled.

Apparently not, because in a statement on the comiXology blog, VP of Marketing Chip Mosher writes, “In order to comply with the Apple App Store guidelines regarding adult or inappropriate content, some new releases were rejected for our iOS app this week. In addition, certain previously released titles that fall outside of these guidelines were also rejected and will be removed from sale.”

In the aftermath of the original controversy, comiXology revisited and re-approved a few other Image comic titles, including Black Kiss II, XXXombies, and SEX. However, these titles are now no longer available, as well as 53 others.

All the titles in question are still available to download and purchase from the comiXology website, but they will no longer be available on the app. A full list of what’s been removed can be found here — it includes titles like Omaha the Cat Dancer, The Boys: Herogasm, and the Eisner-nominated gay-centric anthology No Straight Lines. The latter certainly won’t do comiXology any favors, since they were accused of rejecting Saga #12 for homophobic reasons in the first place. Sigh.