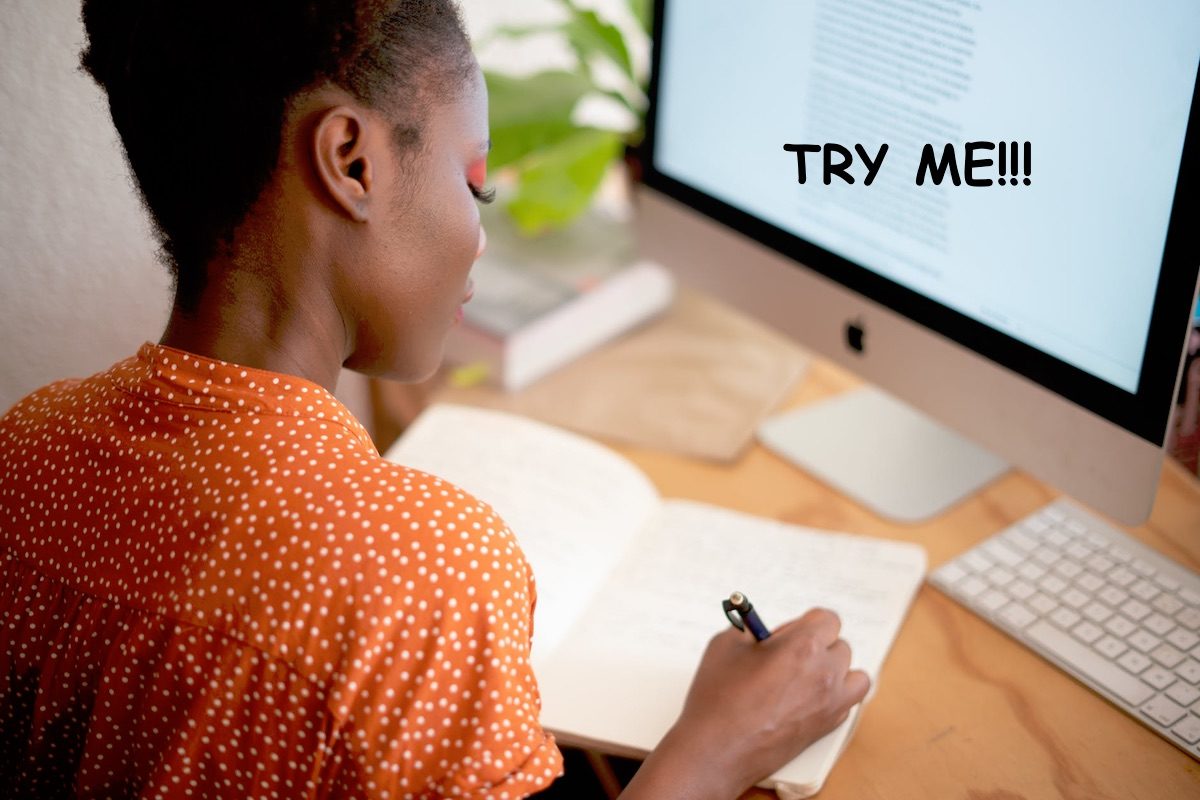 I saw an intriguing post go by on Tumblr, wherein the poster claimed that switching their font to Comic Sans—arguably the most derided font in existence—had helped unblock their writing. The post was reblogged more than a hundred thousand times, with additional users adding that they had tried the Comic Sans trick and, amazed, found that the font worked wonders for them, too.

The idea that a mere font-change could alter the way one writes, and indeed help spark creativity, fascinated me. I went digging, and it turns out the Comic Sans phenomenon has been explored before. In a December 2018 post on Lifehacker entitled “Get Over Yourself and Start Using Comic Sans,” A.A. Newton explained why the font-swap clicked for them as a compulsive self-editor:

The entire point of Comic Sans is that each letter is totally distinct from the others. It’s why people who have dyslexia love this font: the irregularly-shaped letters make it easier to break words down into their component parts and properly interpret them. If all the b’s look kinda like p’s, which also resemble q’s and d’s or maybe even g’s, that’s much harder to do.

Even though I have the opposite problem—I don’t need any help scrutinizing my writing at the syllable level, thanks—writing in Comic Sans has helped me break inefficient habits I’ve clung onto since college. The words all melt into a cohesive mass that I’m able to consider as a whole, rather than immediately needing to pick apart, so I write faster and more fluidly. As a freelancer, that’s never a bad thing.

Dolores Toner, in a Medium post, “Yes, Really: Comic Sans Is Making Me a More Productive Writer,” takes a similar tack as Newton in describing her experience trying out the Sans. Something about this silly-looking, less-pretentious font enables us to let go of overly obsessing over our writing while it’s in progress.

Seeing one’s own work stripped of pretension down to its most basic level, language wearing children’s clothes, is a powerful thing. By the second or third day of writing in Comic Sans, I found myself feeling freer than ever to make silly mistakes, take risks, and explore stranger territories.

In result, the word count of my novel has doubled in the past week.

There is no magical solution to writer’s block, but sometimes even the smallest changes of habit can remind us of our own meek position as artists.

As we head into NaNoWriMo, or National Novel Writing Month in November, I thought other writers out there might want to hear about this potential creativity hack. As an experiment, I’m using Comic Sans to write this very post, and it feels … fine? It definitely seems less like “work” on the screen, and flows nicely. I’ll report back when I make an attempt with a fictional piece; I’ve been feeling blocked in that respect lately. If Comic Sans does work for me, is there really some inherent psychological magic in the font, or will it be a sort of placebo effect? The honest truth is that I don’t care, if I can banish this particular block.

Fast Company has a fascinating story from 2014, “The Science of Comic Sans,” in which they explore the emotional response people have to various fonts, as well as the importance of typeface across the ages. It’s worth a read, and especially interesting for our Comic Sans purposes here:

Amare, the South Alabama scholar, included [Comic Sans] in one of her recent studies on the emotional effects of typeface. Whereas most fonts trigger one emotion more sharply than others, Comic Sans produced spikes across the emotional spectrum–from agitation to calm. It’s basically a rollercoaster of emotions wrapped in a few playful curves. People either love it or hate it.

[…] Just for fun, she recently changed part of a website that she helps manage to Comic Sans, to observe reader response. And then received emails requesting the type be changed back immediately because it was unprofessional. Interestingly, once she switched the text to Times New Roman, other users told her they kind of missed the “fun” type, and now found the site “somehow duller, boring, and more mundane.”

Of course, if we were to complete a project, I don’t think anyone is rushing to print a finished work in Comic Sans. Can you imagine reading an entire book in the wayward font? Yet as I type these words right now, there’s something increasingly liberating about seeing them appear in a sort of non-conformist configuration.

Have you ever attempted this font-changing trick before? Intrigued enough to try it? Let’s talk typeface in the comments.