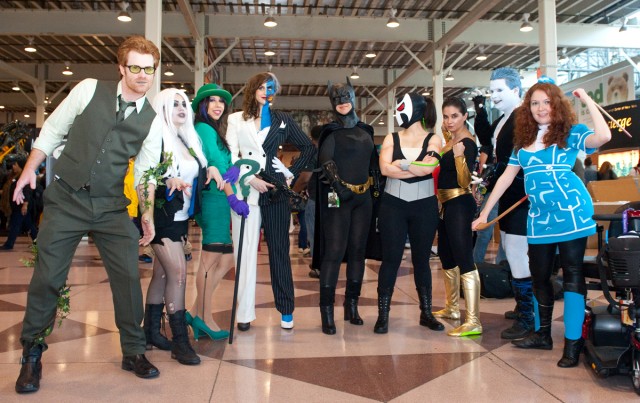 Is cosplay to blame for creators not making enough money when they exhibit at conventions. We’d have to say no, but one creator’s wife poses such an argument.

As a longtime nerd, fan, and cosplayer, I hate to see creators badmouthing what amounts to enthusiasm for media. Of course there’s times when some fans are too enthusiastic; but without them, where would creators be? I found it hard not to have flashbacks of that time artist Tony Harris went on a rant about “cosplay chix” while reading a blog post by Denise Dorman, wife of Dave Dorman, famed comic artist.

But today, I have something on my mind…something most comic book artists would never publicly reveal. However, I think it finally needs to be said aloud. We need to–as comic book convention exhibitors and comic book wives–finally crack the seal on this conversation. I invite any of you following me to respectfully discuss this issue.

Privately, famed comic book industry personalities everywhere are discussing with each other whether to stop exhibiting at comic book conventions. There’s a fine line between being accessible to and pleasing the fans vs. LOSING MONEY at these conventions.

She goes on to describe a few recent examples of terrible sales, most recently at Wizard World Chicago  and San Diego Comic-Con 2014. Now, if you’ve ever attened a Wizard show, you’d know they absolutely prioritize celebrity appearances over comic book creators. Very few creators are listed on their highlights section from the recent show. SDCC of course is the largest pop-culture convention out there these days, and is more a Hollywood announcement vehicle than anything else. But the first reason Dorman gives as to why their sales are low recently is cosplay.

I have slowly come realize that in this selfie-obsessed, Instagram Era, COSPLAY is the new focus of these conventions–seeing and being seen, like some giant masquerade party. Conventions are no longer shows about commerce, product launches, and celebrating the people who created this genre in the first place. I’ve seen it first-hand–the uber-famous artist who traveled all of the way from Japan, sitting at Comic-Con, drawing as no one even paid attention to him, while the cosplayers held up floor traffic and fans surround the cosplayers–rather than the famed industry household name–to pose for selfies.

The hard-working artists and creators who are the very foundation of this industry…the reason there even is an industry….those creatives who have busted their asses and spent money they perhaps didn’t have to spare in order to be there exhibiting for–and accessible to–the fans…have been reduced to being the background wallpaper against which the cosplayers pose in their selfies. At what point do you start to wonder if–other than your faithful, loyal regulars who are like family and who find you every time–the general fandom population even gives a shit about the creators more than they care about their Instagram profiles?

I’ll be the first to admit I revel in the amazing, visually arresting costumes. I snap photos. I have cosplay friends who dedicate their lives to it. I admire the creativity, the expense, the time investment, and the sacrifice–especially the imaginative Steampunk cosplay. I just float the idea that maybe we’ve reached a tipping point. Have the expenses of dressing up, rising ticket prices, price gouged hotels, and parking costs to attend these costly conventions made it financially unfeasible for people to actually spend money on exhibitors anymore?

I don’t want to be too hard on Dorman as I feel her concern is a very real and certainly scary one for comic creators, but I think she’s looking at it all wrong. While she does go on to say rising prices involved in attention cons could also be a factor, how does cosplay actually factor in? It seems overly critical for a hobby (or sometimes occupation) which bases itself around creators’ work.

In the comment section on the blog, Dorman goes on to write, “I agree with you in that I never meant to ascribe cosplay as the REASON for the downturn in earnings – I was just pointing out there’s a palpable shift between the show being commerce-driven and now social gathering-driven, which isn’t financially sustainable for anyone involved,” as well as, “Actually, I did not blame the cosplayers. What I did was note a trend, which is the shift from a commerce-centric show to a social gathering-centric show, and an ancillary trend of people attending no longer giving a shit about the artists, writers and creators in favor of posing with pop culture/TV/film icons and cosplayers rather than the comics industry legends.”

Again, I think her heart is absolutely in the right place; but she also absolutely blamed cosplay, and did not mention the social aspect of cons in her original piece at all.  Writer/artist Jim Zub took to twitter last night to explain his thoughts on the post.

Zub certainly has a good point about the collector nature of comics and how the medium has changed the last few years. I’d also wager “geek” becoming more mainstream and all-encompassing is actually the biggest factor. More people went to see Captain America than read it monthly, so of course fans are going to spend their money on an autograph or photo op with Chris Evans rather than original art.

“My two cents: blaming cosplayers for a downturn in convention sales is a gross simplification of a complex situation,” creator Ron Marz tweeted and continued, “Cons are increasingly diverse in both audience and guests. A wider audience is great; comics have to figure out how to get their attention.”

But Dorman isn’t wrong about creators struggling, and not just with convention sales. I hear it from my friends and see creators talking about it on Twitter/Facebook often. The industry as a whole is suffering, which is one of the main reasons The Mary Sue and countless others are always asking for better representation for comic characters and creators. More people need to be reading comics before they come to a convention to spend their hard-earned money on them. Then again, I know creators who do nothing but travel to cons across the country because it’s their biggest source of income. Either way, I find the connection between cosplay and poor sales tenuous at best. What are your thoughts?