Comet ISON Went out in a Blaze of Glory, NASA Investigating Its Remnants

Giant balls of ice should probably steer clear of the sun. Just saying. 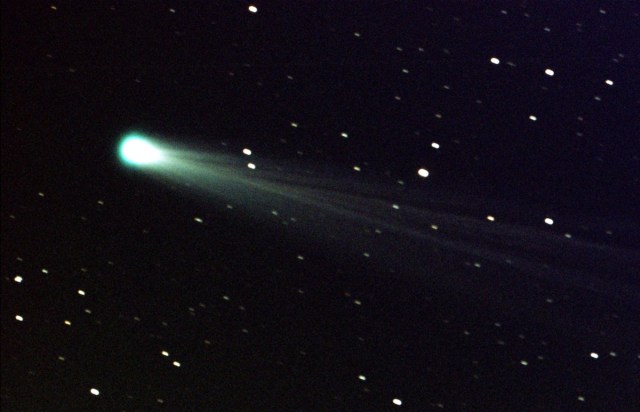 Something has survived comet ISON’s close brush with the sun — in a good and non-ominous way. When ISON passed extremely close to the sun on Thanksgiving, no one was sure if it would survive, and for a little while it completely disappeared. Eventually, something emerged on the other side, and NASA is still trying to figure out what.

In the video from NASA below, you can see exactly what happened as ISON rounded the sun on its journey back out into the universe:

While the comet is sadly no longer visible as a bright streak in the sky, NASA is still trying to figure out exactly what part of it survived its trip. By now, it’s likely that, even if the comet’s icy core had survived, it has since completely dissolved into a cloud of flying debris.

#Comet #ISON: Is it simply debris or does it have a nucleus? We’re still investigating: http://t.co/JsKeVEEcEQ  pic.twitter.com/Mr4GJo1D9v

Either way, the comet’s surprising behavior didn’t disappoint scientists. ISON originated from the Oort cloud, which is a distant cloud of debris left over from the dawn of the solar system. With that in mind, NASA can extrapolate data on the formation of the solar system from ISON’s brightening pattern, because they’ll learn about its composition from the rate at which different materials burned off of it. Seriously, scientists are crazy-smart.

That, along with what investigations into remnants the of ISON reveal, will provide plenty of information on where we all come from. Thanks, ISON. You will be missed.

(via NASA, image via NASA Goddard)