Slugworth is going to lose his mind. 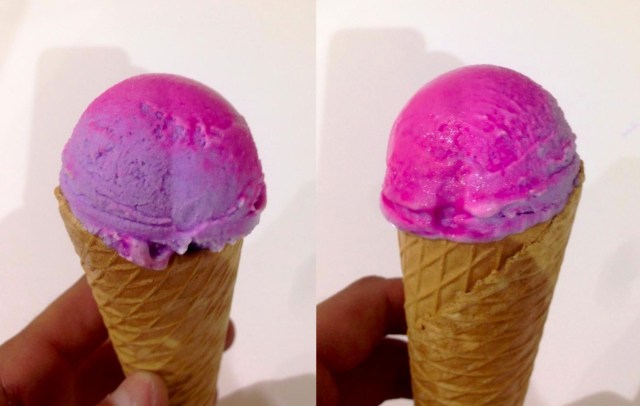 Not that ice cream needed improving, because it’s ice cream and therefore already one of the best things in history, but someone went ahead an improved it anyway. Spanish physicist Manuel Linares created Xameleón, an ice cream that changes color as you lick it—and he’s not stopping there. Magic is real, everyone.

Linares, a physics professor, decided to pursue what he calls a “Masters Diploma in Creating Artisan Ice Cream” on the side after seeing a type of ice cream that changes color under fluorescent light. Impressed, but not content, Linares decided to develop and ice cream that reacts to temperature and acid found in saliva.

After about three weeks in a self-funded lab working with some friends, Xameleón was born. It has a flavor similar to tutti-frutti according to Linares, but perhaps more importantly, IT FREAKING CHANGES COLOR.

Linares hasn’t revealed the secret to his magic ice cream, but some suspect it’s the fruit being used. The reaction doesn’t happen on its own, though. The ice cream starts as a light blue color, and once it’s scooped into a cone, it gets sprayed with a mysterious “love elixir” that Linares says accelerates the process. That causes the ice cream to turn pink, and it changes to purple as it’s eaten.

The fact that Linares hasn’t revealed the secret ingredients responsible for the color change may make some folks suspicious, but he insists they’re all natural. Of course, lots of things are natural but still dangerous.

If you’re interested in trying the ice cream or some of Linares’ future creations, he’s opened a shop in Blanes, Spain called IceXperience. If you can’t make it to Spain, you can follow the shop’s Facebook page.

Previously in ice cream is magic