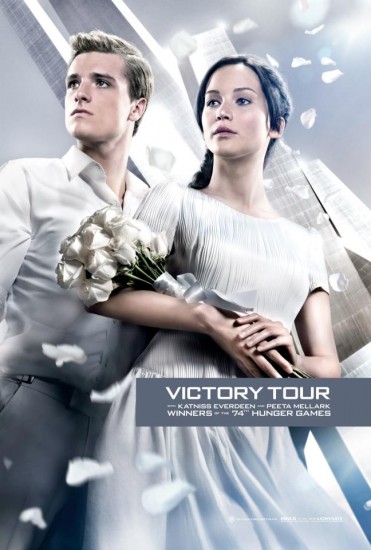 “I’m thrilled with the work Tim Palen and his marketing team have done on the film. It’s appropriately disturbing and thought-provoking how the campaign promotes ‘Catching Fire’ while simultaneously promoting the Capitol’s punitive forms of entertainment. The stunning image of Katniss in her wedding dress that we use to sell tickets is just the kind of thing the Capitol would use to rev up its audience for the Quarter Quell. That dualistic approach is very much in keeping with the books.” – The Hunger Games series author Suzanne Collins speaking to Variety.

It’s an interesting statement from the author considering the conversations that have come up specifically in relation to the marking for Catching Fire. For instance, this Catching Fire TV spot brought to us by Subway (or this one), the Cover Girl campaign, or the nail polish released in tandem with the first film. Fans seem to fall anywhere from, “this makes sense,” to “this is so wrong.”

What do you think of their approach? Do they not go far enough to make the point shared in the novels?