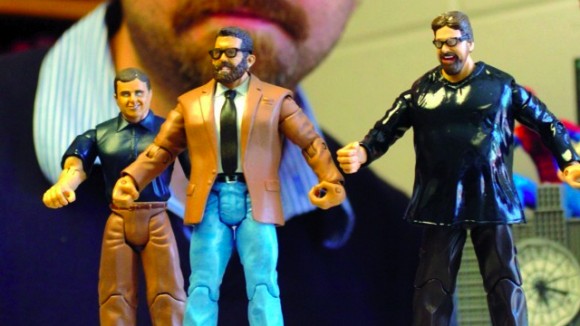 In the midst of a slew of movie releases for classic fictional superheroes and all the merchandising that comes with them, have any of us stopped to think about the real heroes in our lives who might deserve their own action figures? Maybe those who inspired us and encouraged us academically? The University of the Ozarks in Arkansas did, and one professor — Dr. Jesse Weiss — had a bunch of action figures created for his colleagues. And that’s why he is going to be the coolest guy in the faculty lounge.

An action figure junkie, Dr. Weiss’s hobby is customizing action figures from the manufacturer Jakks Pacific. And it dawned on him that he thought the guys he worked with were kind of awesome and warranted their own tiny plastic replicas. He explains:

“All it takes is a dremel tool, model paint, and Sculpey modeling compound for the hair, beards, glasses -– and time.”

He also makes action figures out of his own family! Among the lucky, immortalized faculty members: Ozarks President Dr. Rick Niece, Associate Professor of Biology Dr. Sean Coleman, and Assistant Professor of English Dr. Brian Hardman. These are most excellent, but we’d like to take this moment to make a humble request that Dr. Weiss consider some of his kickass female colleagues too so they can form a more well-rounded, brainy fighting force. May I suggest a few of the ones I had at Hofstra University?