Stephen Colbert Tore Into John Bolton About His Trump Book, and It Was Glorious 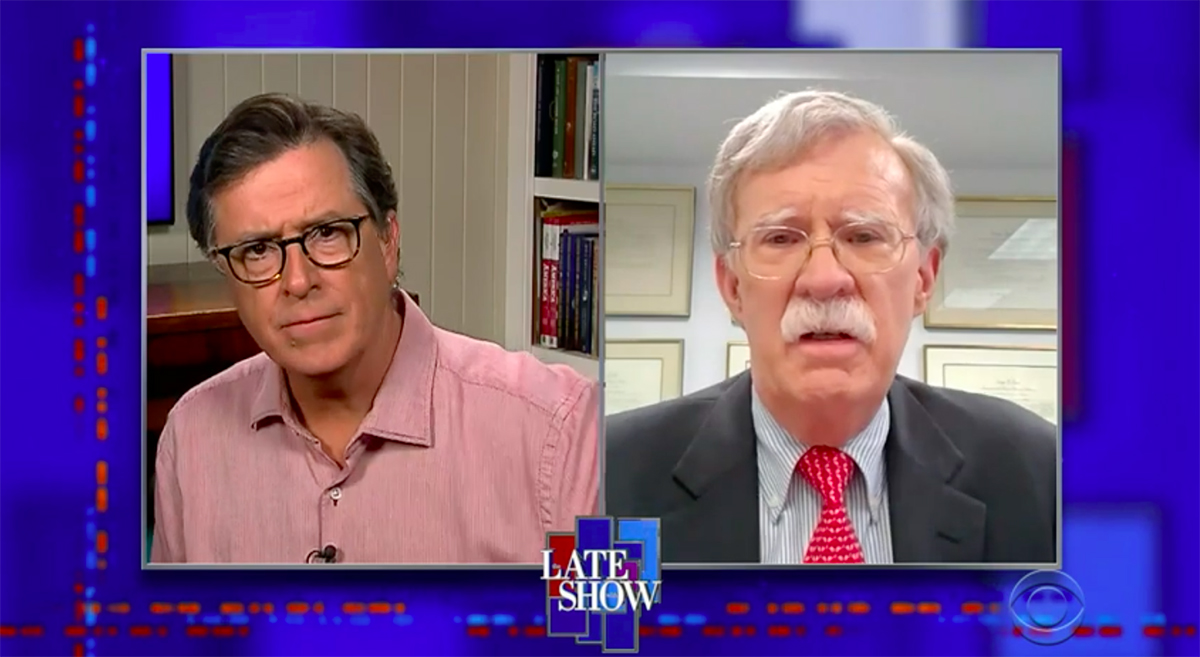 Stephen Colbert, with his political comedy roots, has never shied away from his feelings on politics and Donald Trump in his new Late Show gig. It’s one of the reasons he’s great, and so, when John Bolton took to The Late Show to talk about his new book about his time as Donald Trump’s national security advisor, the late-night host made it clear that he wasn’t going to go easy on Bolton and jumped right in.

Filled with Colbert asking hard-hitting questions, making fun of Bolton, and criticizing his involvement with the Trump administration at all, the interview shouldn’t have been surprising. To be honest, if Colbert had been nice to Bolton and just asked what it felt like writing a book, that would have shocking.

Instead, he tore into him about why he held all this information for his book, why he ever thought it was okay to support Trump if he doesn’t now, and more.

“Did you think the chaos was a ladder that you could climb and do the right thing?” Colbert asks at one point in the first half of the interview, and it’s the truth. If Bolton somehow thought he could fix Donald Trump or stop him, he was woefully mistaken in a way almost anyone could have told him he would be, and he’s not even taking credit for that. He’s just saying he wouldn’t vote for him again.

Bolton went on to say, “I entered, I think, aware of the problems but optimistic that they could be overcome and the book is the story, perhaps, about how I was wrong about that”—meaning he basically thought that a Trump administration was better than a Democratic one, and now, in 2020, that’s truly laughable.

When Colbert asked point-blank about how lifelong conservatives feel about Donald Trump behind closed doors, Bolton spoke in his evasive way:

Well, look, I think many of them, in fairness to Trump, look at the comparison (as I did in 2016, with Hillary Clinton) look at the comparison with Joe Biden, and say “Whatever we think of him, he’s not going to be a Democrat subject”—especially these days—to the pressure of the left. Look, I bought that argument in 2016.

It’s the moment when Colbert finally breaks from asking questions in a seemingly calm manner and tears into Bolton in a delightful turn because, let’s be honest, this excuse from Republicans, of empowering Donald Trump just because he won’t be a pawn for the left, is truly exhausting. It’s even more so with the Trump administration where, as Colbert points out, he’s all but selling us out to hostile foreign leaders for his own personal gain, because it’s clearly more important to him than the American people.

As Colbert points out, there is nothing that Trump has done that is shocking. We’ve all said, from the start, that he’s a monster, and a lot of our fears have just slowly become realities. So, Bolton acting like it got too bad for him, as if Trump having any kind of power wasn’t always a bad idea, is baffling.

The interview went on, with Bolton talking about his decision to not testify in Trump’s impeachment and Trump’s dealings in Ukraine.

I listened to Bolton for exactly 58 seconds (most of which was Colbert’s lead up into Bolton speaking) and then instantly groaned when he started to talk about the impeachment trial and how it was all the Democrats trying to make it a partisan issue.

No offense to walls, but it seems like talking to John Bolton is about as interesting and easy as talking to some bricks. He talks about how impeachment was a “huge strategic failure” on the part of the Democrats because they made it so it was a party vote in the House and then the Senate, and here’s the thing: Republicans could have also realized a monster was in the White House and voted to impeach him.

This idea that it is all the Democrats coming for Trump, as if Trump isn’t targeting the interests of Americans and trying to tear them down, is so frustrating. Is Bolton so lost in his Republicanism that he cannot see how terrible Trump is for America? If not before, how about now that he is responsible for the deaths of over 120,000 Americans because he refuses to take a GLOBAL PANDEMIC seriously?!

It’s also hilarious to me that Colbert asks Bolton twice how he feels about knowing he was the person who could have connected Trump to his impeachable offenses, and Bolton says that he wanted the American people to hear it but not at the impeachment hearings, as if all of America was not watching those but … would read his book? It would be hilarious if it weren’t so infuriating.

Colbert comparing Bolton not testifying to someone not testifying in a murder trial just because a serial killer was only getting tried for one murder is truly perfect. And then Bolton’s answer is about some divide between House Democrats and House Republicans, making his own excuses for not participating in the impeachment of a president he thinks he would vote to remove from office, if he were a senator, exactly the kind of partisan nonsense that he projects onto the impeachment proceedings.

Then, the final aspect of the interview is … well, just as frustrating as the rest.

Rather than focusing on Colbert’s question, Bolton nitpicks his feelings on the American people wondering who is for or against the monster in charge:

Sure, but … Bolton just continues to be part of the problem. It currently is an issue for Trump or against Trump, because that is literally what we will vote on in November (among other things), and if you still support the President, then that’s all I need to know about you as a person.