Food You Can Make in a Coffee Maker | The Mary Sue

10 Foods You Can Allegedly Make In A Coffee Maker 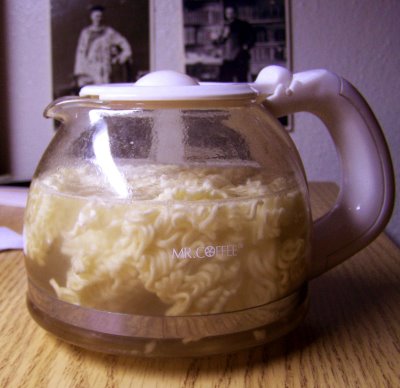 Like so many before me, I was once hungry in college. With term papers looming and the dining hall already closed for the night, food had to come from somewhere. That was the night I learned to make ramen in my coffee maker. At first I was nervous, pouring the hot water over noodles in my bowl, covering them, and letting it steep. Eventually, I became more adventurous: cooking the noodles in the carafe; putting the seasoning packet in the basket that normally holds the filter; adding an egg.

This was cheap food prepared in as cheap a manner as possible. But I had touched just the tip of the iceberg. It turns out there are plenty of foods you can whip up with a Mr. Coffee and some bravery. Our favorites are below. Keep in mind that when cooking with unconventional methods, you run the risk of producing sub-par food and maybe exposing yourself to the dangers of undercooked food. Attempt at your own risk, read with an open mind.

A dead simple recipe, but with the twist of adding a tea bag for flavor. Clearly, whoever wrote this coffee maker recipe is a stone-cold pro. He’s been there, he’s seen things, he’s lived to tell about it, and he needs some orange flavored oatmeal to do it.

Fill a coffee filter with six broccoli florets. Load into the coffee maker. Run six cups of water through for tender but still crisp veggies.

Clever coffee maker cooks will find a way to whip up a cheese sauce to go with this. When you’re cooking in a coffee maker, health food is the least of your concern.

Put 1/2 cup of instant rice per person in the coffee maker. Run the appropriate amount of water (check the box for instructions) through the coffee maker, then leave the machine turned on for 5 to 10 minutes until the rice is fully cooked.

Rice cookers are for squares.

Place the eggs in the coffee pot. Drip hot water over them. Let them cook for a few more minutes.

Several commenters observed that if it is possible to poach eggs in a coffee maker, other foods could easily be poached. Fruit in warm wine or bologna were also recommended.

Place chicken breast in coffee maker. Add enough water to cover about 1/4 of chicken. Sprinkle with lemon pepper seasoning. Turn on maker and cook about 15 min per side. Add milk and butter to remaining liquid, allow to heat for about a minute, and add potato flakes for a quick side of mashed potatoes.

I know what you’re thinking: the thought of cooking meat in a something as low-powered as a coffee maker is completely unappealing. However, Gizmodo adapted this recipe for couscous and chicken and recorded the results. Of note is their choice of side dish, which would probably cook up better than mashed potato flakes, and their advice about steaming vegetables in the chamber that normally holds the coffee grounds. Also, they note that while the chicken does not brown, it does cook well enough.

A bit of a riff on the classic “ramen in the coffee pot,” this clever recipe has you cook thin-cut chicken breasts on the heating element, cook the noodles in the carafe, then whip up a quick pesto in a coffee grinder.

Of note is that, once again, the chicken doesn’t appear to to brown. Cooked is cooked, though. Right?

As mentioned above, if you can poach an egg, you should be able to do a lot more. Here’s the rundown on how to tackle a fish steak. Some commenters noted that trout would work well for this recipe.

Not a meal on its own, but you’ll need something to go with that fish, rice, chicken, or veggies.

Dice one small shallot into the coffee maker. Load two to four sprigs of fresh thyme into the filter basket without a filter, then run 1 cup of cream and 1 teaspoon of lemon juice through the coffee maker together. Season with salt and pepper, and allow the sauce to reduce over the hot plate for 15 to 20 minutes. Just before serving, add 1 tablespoon diced butter and swirl to melt. (Note: Coffee maker will require heavy cleaning afterward.)

Recipes 3, 4, and 8 come from a larger article on how to prepare a meal in your hotel room, which contains such pearls of wisdom as recommending you use a safety razor to sprinkle black truffle shavings over your finished meal. Genius.

The perfect dessert for your shifty, coffee-maker meal.

Pour cream in glass decanter and heat for 15 minutes. Add broken candy bars to cream and heat for 10 minutes. Stir to create a smooth, rich sauce. Heat for an additional 5 minutes, then remove decanter from heat source. Spear fruit with forks and dip in chocolate sauce to coat. Serves three.

This sounds insane, but bear with us. Southern Fried Science has produced the definitive article on “how to brew beer in a coffee maker, using only materials commonly found on a modestly sized oceanographic research vessel.” They recommend using cereals for grains, vegemite for malt, and seaweed for hops. Amazing.

So the next time you’re in a hotel and reaching for the phone and steeling your nerves to fork over $30 for a crappy pizza, go for the coffee maker instead. And if you’re willing to throw the clothes iron in to the mix, it opens up all sorts of possibilities. Now go out there, and cook some dinner in the most backward way imaginable.