And just a perfect film in general 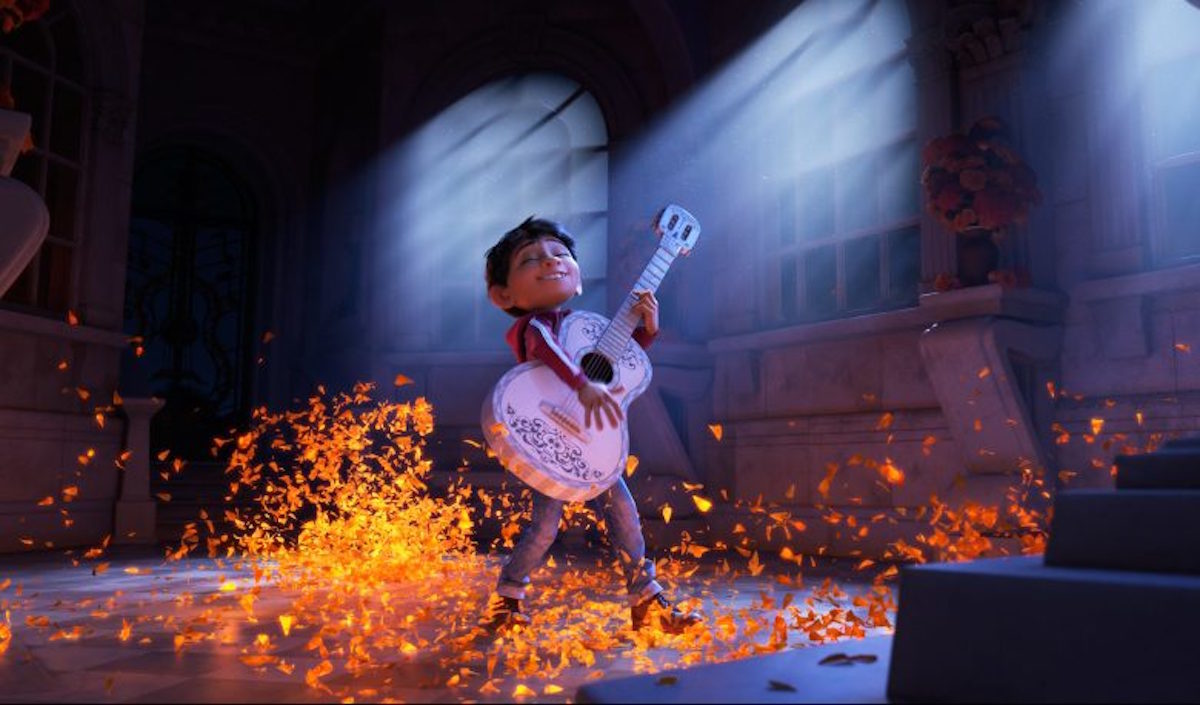 In a since-deleted tweet last week, a Twitter user asked if Pixar’s Coco was a a Halloween movie, to which director Lee Unkrich responded with a firm “NO.” He’s right. The film is about Dia de Muertos, and while it shares a common ancestor with Halloween (the Catholic All Souls Day), it’s very different. That doesn’t mean, however, that this isn’t the perfect time of year to watch Coco, because Coco is one of the best and most beautiful movies ever made.

Coco is nearly perfect. The plot is both incredibly intricate and simple. The story, in case you need reminding or haven’t seen it (but will after reading this) follows young Miguel Rivera of the small Mexican town of Santa Cecilia. Miguel longs to be a musician like his hero, the late great Ernesto De La Cruz. There’s one problem—Miguel’s family hates music. Ever since his great-great-grandmother Imelda was abandoned by her husband when he went to play music for the world and never come back, there’s been no music in the house.

Miguel is a dreamer, the perfect kid protagonist. He’s impulsive and inspired and his best friends are a street dog name Dante, his home-made guitar, and his great grandmother, Coco. It’s a complicated backstory for a kid’s movie but it’s delivered perfectly in the first few minutes of the film, before when even get to Miguel’s quest to sing a the annual Dia De Muertos concert in town, which is thwarted when his abuela finds his secret guitar and smashes it … and Miguel finds that his great-great-grandfather may have been his idol Ernesto. He breaks into Ernesto’s tomb to borrow his guitar and becomes cursed for stealing from the dead.

And that’s when Coco steps into the land of the dead and goes from fun to fantastic. It’s one of the most beautiful visions of the afterlife ever put to screen. As Miguel meets his spectral, skeletal ancestors in the beyond, the filmmakers slowly expand our perspective and Miguel’s. We see the thing we’ve always hoped was out there—departed spirits watching over the living with loving eyes. Drawing from Mexican imagery, the dead are skeletons but they have personality, and the Pixar of it all keeps them cute, not creepy. And then, we see the marigold bridge.

The marigold bridge scene is, and I’m not exaggerating here, one of the most beautiful images ever put to film. Still pictures don’t do it justice. The color. The subtle movement of the flower petals. The way they glow and flow. The slow but amazing reveal of the Land of the Dead, with its thousands of lights and hidden skulls is just amazing.  The work that went into these frames is the best of cinema. It’s visually beautiful, but it’s more than that. It taps into something numinous and eternal, a brief glimpse into a sublime unknown that makes me catch my breath each time I see it.

Coco is funny, visually amazing, surprising and full of great music, but it’s more than that. Coco is a movie about memory. It’s about connecting with our past and ancestors and how the traditions of one culture explore and codify the ritual of remembering. Coco is also a movie about music, the way it helps us connect with each other and with the past. That’s why the central motif of the movie is a song called “Remember Me.” Coco is about Mexico and culture and it effortlessly blends English, Spanish, slang and tradition all into perfect balance and it never looks down on the audience and explains too much. It just is.

Coco is a children’s movie about death. That may sound strange, but it’s one of the strongest parts of the movie and it’s a beautiful film to touch on when we parents need to have those hard conversations about death and loss. It’s also a movie of hope about connections and memories and music keep those we have lost alive in our heart.

More than anything, Coco is about family and love. In the colors of fall and images of skeletons, it’s a perfect film about something huge and universal but so hard to communicate. The final moments of Coco never fail to make me cry because they are not a lament for the dead, but a celebration of the love we still feel for them and the memory that keeps them close always.

So whether you’re looking for a movie of the season, or any movie at all, to make you cry or to make you feel a little bit more connected to those you’ve lost, please, remember Coco.