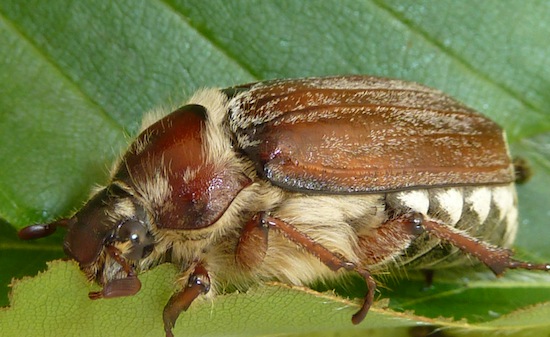 The European forest cockchafer — which no, I can’t type without giggling, thank you for asking — lives on a diet of rough, woody, cellulose-heavy food. It can’t digest much of the tough material on its own, but relies on a community of hard-working microbes to process its meals. A new study by researchers at the Max Planck Institute for Chemical Ecology, though, has revealed some surprising facts about the cockchafer’s microbial community — namely that the microbes it carries are persistent through its metamorphosis from larvae to beetle. That means that the microbes in its gut somehow survive the process of moving from grub to adult, which sees the animal’s internal organs transform into entirely new structures.

Just how the cockchafer hangs on to its gut microbes as it moves from larva to adult is a mystery to researchers. The gut empties out entirely and the body transforms dramatically — from an unremarkable off-white grub to a furry brown beetle — during the process. This only serves to deepen the mystery of how larva acquire their diverse gut microbiota in the first place, as only a few of the many bacteria found in its gut are native to the trees and plants of its region, so it’s not getting its gut bacteria from the food it’s eating.

That leads researchers to believe that the creatures have co-evolved with their gut bacteria to the extent that they are born with a full supply of the the gut microbes that they need to survive, and even have some way of replacing them in the pupal stage, which is pretty impressive, considering that the gut it goes into metamorphosis with is not the gut it comes out with. Researchers plan to keep studying the insect to find out what its secret weapon for keeping bacteria in balance — and seemingly producing them out of thin air — might be, and also probably because they never get tired of telling people at cocktail parties that they study European forest cockchafers for a living. I mean, would you?