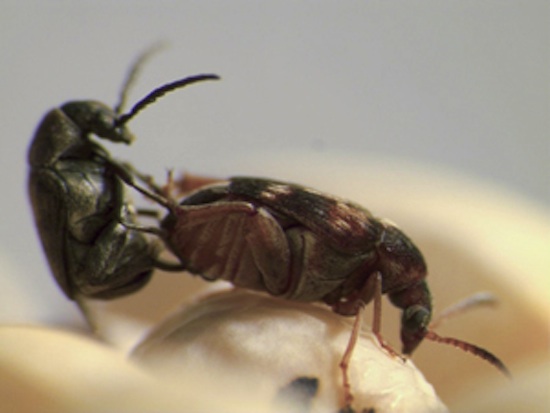 Bad news today for less-than-well-hung males. Well, male seed beetles at least. It turns out that contrary to the gentle reassurances of female seed beetles the world over, males with larger genital spines make for more successful and more attractive mates.

Like many species, fertile female seed beetles breed with a number of males in an effort to endure the fertilization of their eggs. According to a study published today in the journal Current Biology, male seed beetles with larger genital spines were more likely to be responsible for fathering the next generation of seed beetles. According to Michael Polak, one of the co-authors of the study:

“Because females mate with multiple males, the function of the male copulatory organ may determine which of the males will fertilize most of her eggs. Our results show that the morphology of the male genitalia affects his fertilization success in these beetles.”

But how exactly do scientists know that it’s the size of the copulatory organ that drives this virility and not a gene that happens to accompany it? Well, they selectively bred for some beetles with larger members, and modified the organs of other beetles with laser surgery, and then ran tests on both. The result? Larger-spined beetles were more successful than their smaller-spined brethren at impregnating females. The proof is in the, well, let’s just call it “pudding” for lack of a better analogy, fair enough?

(via University of Cincinatti, image courtesy of same)