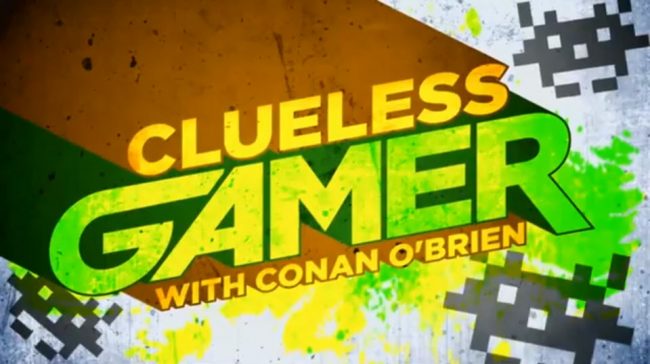 The “Clueless Gamer” segment on Conan has been a successful viral hit for the show ever since it started back in 2012, and since then, it’s only continued to be one of the most popular segments on the show. Knowing that, it’s a bit of a surprise that the segment never became a spin-off TV show before now. In any case, it’s all finally happening. “Clueless Gamer” is striking out on its own! And by “on its own,” I mean, “without Conan.” Yyyyyeah.

Conan O’Brien’s deadpan disinterest in video games is the entire reason why the comedy segment works so well, though, which is why I’m not sure that this spin-off series will fly without him. It’s a segment that relies almost entirely on a bit that Conan also does in other segments, which can be very hit or miss, and also a risky type of joke to tell. I would describe that bit as “making fun of nerds.”

Conan does a very similar type of routine in the “Jordan Schlansky’s Product Review” segment. Here’s an example of how it works: Jordan Schlansky showed Conan one of his impressive Star Wars replica masks, and Conan mocked him for refusing to take it out of the box. This resulted in a pretend “fight” between the pair.

Just like “Clueless Gamer,” this is a routine in which Conan is making fun of stereotypes about nerds and distancing himself from those stereotypes. The reason this joke is risky should be obvious: it has to allow “nerds” to also be in on the joke, because people who like Star Wars and video games make up a significant percentage of Conan‘s audience. Those people also make up a significant percentage of any audience, because Star Wars and video games are popular! But it’s not “cool” to like those things too much… right? Hmmm.

That’s the tightrope that “Clueless Gamer” has to walk, and thus far, it’s done so with varying levels of success. When it’s good, “Clueless Gamer” allows Conan to make insights about the bizarre problems and discrepancies that arise in video games–the types of problems that only someone who isn’t immersed in video game culture would notice. These little gems of wisdom from a self-described “clueless” player provide lots of unintentional comedy. However, sometimes, “Clueless Gamer” becomes unfunny when Conan gets either too cruel or too frustrated to care about the game, and instead resorts to mocking anyone who’s interested in it, distancing himself from the entire pastime.

The reason this is so tricky, I think, is because the entire concept of “nerd culture” has already been changing a lot over the past couple of decades. On the one hand, Star Wars and video games are wildly popular, way past the point of just “niche” interests that are only “for nerds” (and, by the way, that was always true–Star Wars has been mega-popular since 1977).

At the same time, though, even though we supposedly live in “the age of the nerd” where all “nerd” things are “cool” now, there’s still the sense that it’s possible to go too far into nerdery–and that’s where the mockery comes back in. It’s socially acceptable to watch Star Wars, but not socially acceptable to collect high-end Star Wars memorabilia… or, at least, not according to Conan O’Brien’s comedy bit. But, at the same time, Conan is implicitly endorsing these supposed “nerds” by having them on his show and providing them with opportunities to show off something cool. So, even if he makes fun of it, it’s still kind of an endorsement and a sign of acceptance… in a way.

I think the only reason this bit works is also because Conan O’Brien is, himself, a straight white guy who also has some “nerd cred” in some ways; he went to Harvard, for one thing, and he also used to work for The Simpsons during some of its best years, which gives him a very particular kind of credibility for nerds who like comedy and TV. Which, obviously, describes any nerd who likes Conan! So, even when Conan O’Brien makes fun of nerds, there’s the sense that his mockery is “safe” somehow–yes, sometimes it goes too far, but he’s already an established identity. Plus, the straight white guy thing seems to help.

I assume this is why gamers haven’t leveraged a massive hate campaign against Conan O’Brien for the “Clueless Gamer” series. Because gamers have done that in the past, when they perceive supposed “gaming outsiders” as criticizing or mocking their pastime. It’s actually pretty surprising that Conan has gotten away with doing that for so long, and it doesn’t seem like a good idea to expect anyone else to be able to take on that task without incurring the wrath of gaming’s worst.

Basically, I’m saying, don’t cast a woman to host this. That will not end well.

(via The Verge, image via TBS)