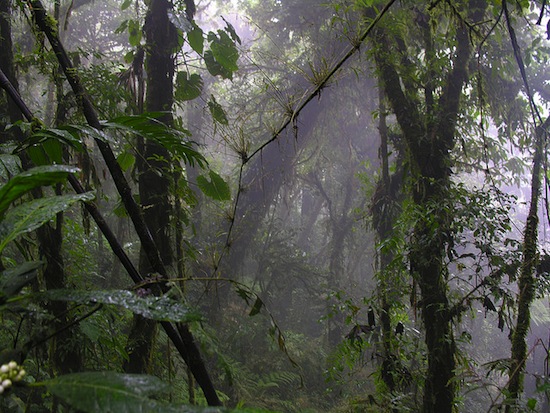 Trees in cloud forests get plenty of fog to go around, but rainfall that actually saturates the ground can be rare. According to researchers from the University of California Berkeley, the trees that populate those forests have found an evolutionary workaround — rather than depending solely on their roots to absorb water, they have developed the ability to drink in the water vapor in the clouds that surround them through their leaves.

While cloud forests can feel damp to walk through, they are in many ways similar to arid environments, foggy but with little actual precipitation to speak of. Pulling in water through leaves as well as roots gives trees in cloud forests a way to stay moist without depending on groundwater — they can just take the moisture they need from the mists that surround them most days. As climate changes, though, the research team warns that this adaptation could lead to the trees downfall, as the clouds they depend on for life-sustaining moisture become more and more rare.

To demonstrate that the trees were absorbing water through their leaves, the UC Berkeley team attached miniature sensors to leaves to judge their wetness, finding that the leaves were indeed acting as siphons, pulling surrounding moisture into trees to tide them over during the forest’s dry season. Graduate student Greg Goldsmith, who worked on the research, said that the traditional picture of plants taking water in through their roots and it moving up through the tree trunk is still accurate for these trees — it’s just not the whole story.:

With our sensors, we observed water entering the leaves and actually moving back down the branches toward the trunk.

The study also showed that not all trees absorbed water through their leaves equally. That could mean some species are more dependent on this supplemental sustenance than others, giving scientists hints as to how the makeup of cloud forests may change as they likely become more forest and less cloud in coming years.